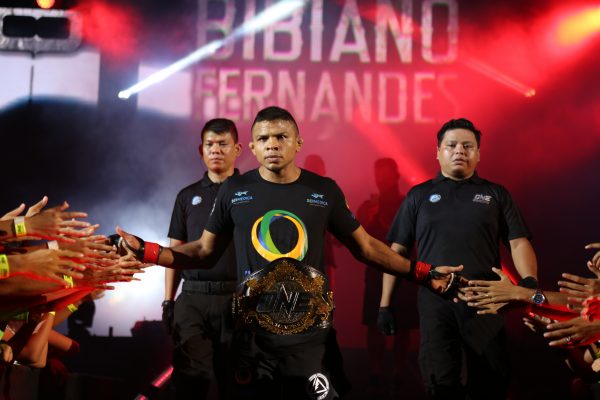 ONE on Prime Video 4: Abbasov vs. Lee is loaded with interesting matchups and high-stake showdowns, and it is set to light up the Singapore Indoor Stadium on Friday, Nov. 18.

A hefty part of the excitement surrounding the event stems from the bantamweight matchup between former divisional king Bibiano Fernandes and fifth-ranked divisional contender Stephen Loman.

Fernandes has long been seen as a pound-for-pound talent, but he is coming off a knockout loss from John Lineker back in March that saw him lose his long-held title. For many, that would be motivation alone, but the 42-year-old superstar viewed the matchup as a good way to get back into active competition.

“Since the defeat, I’ve been training a lot. I also focused on my business and my family, and I did an MMA event in Manaus. I made several adjustments, and I’m ready to fight on November 18th. The fight with Lineker was a good experience. I hadn’t fought for many years, and I didn’t have a fight rhythm. But now, I’m trained and focused for my next challenge,” Fernandes said.

“The Flash” will be facing an undeniable challenge in his upcoming bout. Loman will be coming into the ONE Championship Circle with the intent to usurp Fernandes in the official ONE athlete rankings and make himself next in line for whoever ends up holding the title between Lineker and Fabricio Andrade.

Having fought Loman’s Team Lakay teammate Kevin Belingon on three occasions, the former bantamweight king feels that he is familiar with the approach that fighters from the world-renowned gym take, and he believes that will play to his advantage on Nov. 18.

“Every time I fight, I go for the knockout or submission. I’ve seen his fights, and I’ve noticed that he moves a lot. He hits and moves all the time. He’s a very athletic guy. He has a dangerous left hand. He has Team Lakay’s style,” Fernandes said.

While the window may be closing on Fernandes’ hope for another title run, he isn’t ready to go quietly. He cites multiple successful combat sports athletes who have found success in their 40’s, and it will be up to Loman to prove him wrong.

Fernandes has kept his body in impeccable shape over the years without suffering major injuries. With a clear mind, “The Flash” still looks the part of a prime athlete half his age. With both mind and body on point, he believes his time at the top isn’t over yet.

“I am 42 years old, but with a body of 30 and a very healthy mind. I take good care of my body and my mind. As long as my body and mind are fine, I will keep fighting. I don’t see this as my last fight. Randy Couture fought until he was 48. Anderson Silva is 47 years old and still fighting, so I think I still have a lot of wood to burn. The Bibiano era will not stop here,” Fernandes said.

ONE on Prime Video 4: Abbasov vs. Lee airs live and free for all Amazon Prime subscribers in the U.S. and Canada on Friday, Nov. 18, at 8 p.m. ET. Tickets for the event are on sale now at Ticketmaster.