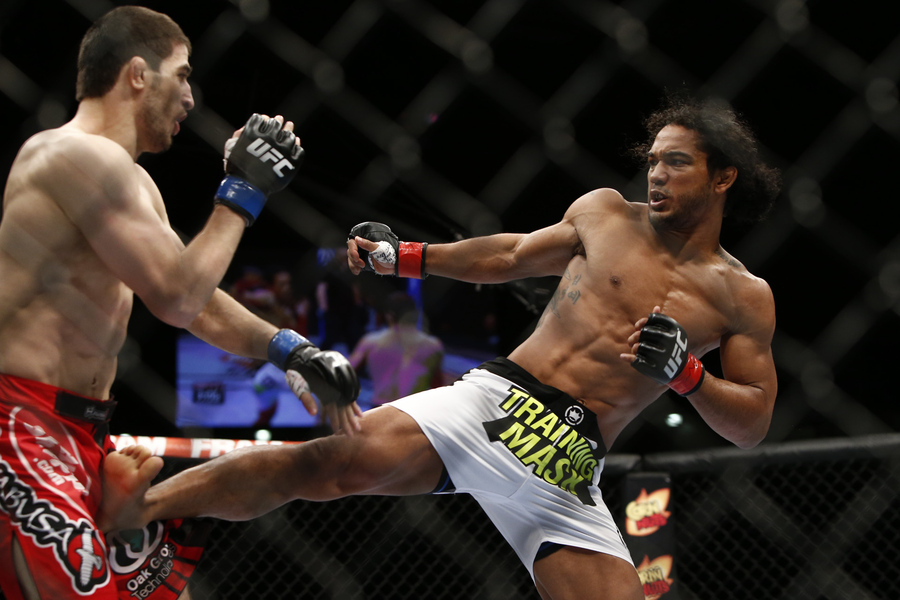 I’m not sure if fight fans really needed any evidence of how dangerous the weight-cutting process fighters go through truly is, but the MMA gods apparently decided to teach us a lesson over the past few months. In a span of not even seven days, the UFC had bantamweight title challenger Renan Barao, flyweight Henry Cejudo and featherweight Charles Oliveira all drop out of their respective fights due to various weight-cutting issues that deemed them medically unfit to compete. In July, MMA fans stared at their screens in horror as a drawn-out and exhausted B.J. Penn was battered and beaten by Frankie Edgar after an ill-advised cut to 145 pounds. Then there are the countless times we’ve seen fighters attempt to drop a weight class and, as a result, make their next walk to the cage looking like a skeleton. It’s hard not to notice the extreme amount of danger fighters put themselves in before even stepping into the cage.

Yet, as dangerous as both the fighters and fans alike know cutting copious amounts of weight is, it’s still by far the most common problem in MMA. Yet, we turn a blind eye. The MMA community wages a constant war on performance-enhancing drugs and testosterone-replacement therapy, but the fact is that the fighters may be doing more damage to themselves by trying to cut 20 pounds in three days than their juiced up opponent could ever do to them never seems to cross our minds.

My Combat Press colleague Stacey Lynn recently “weighed in” on the issue and said the most ideal option to fix the weight-cutting problem is to hold fighters accountable for themselves and hope they cut weight intelligently. As true as that may be, it’s not going to happen unless fighters have proof that they can produce big results without cutting a ridiculous amount of weight. Champions like Jose Aldo, Johny Hendricks and Chris Weidman have all earned their straps while shedding a good portion of pounds to make their respective weight classes, and that fact isn’t lost on the guys chomping at the bit to get a piece of UFC gold. So, when a former UFC champion and a fighter that’s considered among the best in the sport like Benson Henderson makes the decision to move up and forgo the usual 20-plus-pound weight cut he usually undergoes in favor of fighting closer to his natural weight, it provides a little hope that “Smooth” can become a game-changer as far as cutting weight is concerned.

Barely a year ago, Henderson was the lightweight champion and had won seven straight fights to start his UFC career. Throughout his title reign, Henderson’s weight was often part of the fight-week discussion, mostly since Henderson didn’t hide the fact that he didn’t have the easiest time getting down to 155 pounds. “Smooth” never missed weight or even came out looking lethargic, but the question of how the weight cut would affect Henderson’s performance was still there every fight week. No matter how many times Henderson proved the cut didn’t affect him, there was still the question in the back of everyone’s mind that asked when the cut was going to come back to haunt him. It still hasn’t.

Henderson was always a huge lightweight, but he didn’t use his size as a crutch. Many fighters that cut a ridiculous amount of weight do so because they intend to use every bit of that size advantage, whether that means smothering their opponent on the mat or just muscling their way around the cage. Outside of contributing to his excellent takedown defense, most of Henderson’s primary weapons, including his ability to get a takedown of his own, came more from speed and timing than raw size and power. While there’s no denying that being the larger fighter helped Henderson at lightweight, the battles he had with Frankie Edgar are the only fights where he seemed to use it as part of his game plan.

As a result, Henderson’s game shouldn’t suffer much, if at all, when he decides to move up to welterweight. When comparing overall skill sets, it’s hard to find a single welterweight that “Smooth” wouldn’t at the very least put up a solid fight against. As long as Henderson doesn’t look like a freshman compared to a senior when standing across the cage from elite welterweights, he should be able to compete. His wrestling defense may take a hit at first, but there’s no doubt that John Crouch and the rest of the coaches at The MMA Lab will make that a top priority when Henderson is fighting bigger men. With that level of coaching behind him, “Smooth” should still be in good shape. And while it will be interesting to see how Henderson reacts to getting hit harder than he’s likely ever been hit at 155 pounds, there’s no reason why he can’t become the same top-tier contender that he’s been at lightweight.

Henderson has a chance to make just as much noise in his new weight class as he did in his old one, and if he’s successful, there’s a chance he can change the weight-cutting game for the better.

Obviously, there are some fighters that will do anything short of willingly amputating a leg to gain a size advantage on fight night, but for the fighters who are cutting a ton of weight just because that’s what the best in the sport are doing, Henderson winning at close to his natural weight could force them to reconsider putting their body through hell every camp. Like all other sports, MMA thrives on copycats. If Henderson has even a small bit of success, then other fighters are likely to follow in his footsteps. From Henderson’s viewpoint, moving to welterweight is probably nothing more than a business decision. But if it works, there’s a chance he’s helping change the entire sport for the better in the long run.