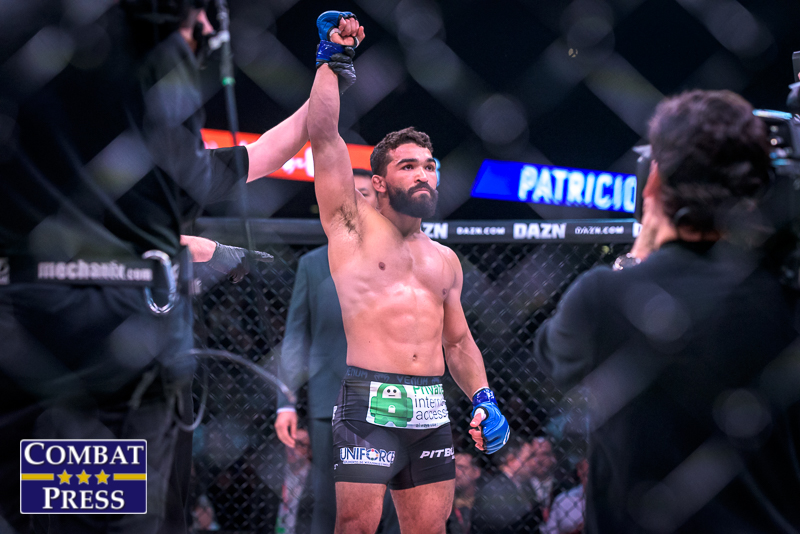 ​​Bellator will travel to Long Beach, Calif., on Saturday, Oct. 1, as Bellator 286 currently features a stacked fight card of 14 matchups. The main event will be the first title defense of Patricio “Pitbull” Freire’s latest run as featherweight king.

In the main event, Pitbull has moved on from his rivalry with A.J. McKee Jr. to defend the title against Adam Borics. ‘The Kid’ has made a name for himself in Bellator and secured a title shot against the Brazilian with an impressive win against Mads Burnell.

The co-main event displays the next chapter in McKee’s career, as he makes his lightweight debut against the always entertaining Spike Carlyle. ‘Mercenary’ is a massive betting favorite, but underestimating Carlyle would be a mistake.

The Bellator 286 main card also has Aaron Pico vs. Jeremy Kennedy, and Juan Archuleta when he takes on Enrique Barzola. The preliminary card airs live on Bellator’s YouTube channel, starting at 7 p.m. ET with the main card following on Showtime at 10 p.m. ET. Check out the full preview and predictions below.

Patricio “Pitbull” Friere puts his featherweight title on the line in the main event against Adam Borics; does the champion successfully defend the title he just regained in his last outing?

Pitbull is ready to dominate the featherweight division, but his title run could be short-lived. Borics has finally made his way to a Bellator title shot after 19 pro-MMA wins. Despite his lack of five-round experience, Borics’ opportunistic fighting style might cause trouble for Pitbull.

Patricio is an explosive fighter that’s always looking for a finish. Meanwhile, Borics started his career as an unpredictable finisher but became more composed after gaining experience. Borics could find an opening like McKee did against Pitbull in their first fight.

That said, Pitbull’s experience in championship fights should be the difference. The constant pressure added with an attention to detail will likely lead to the Brazilian’s first title defense since beating McKee.

A.J. McKee moves up to lightweight for the first time in his career this weekend; does he make it a successful 155-pound debut by beating Spike Carlyle?

McKee’s move to lightweight was surprising considering his success at featherweight, but it seems like the former champion didn’t want to wait for Pitbull. ‘Mercenary’ will take on ‘The Alpha Ginger,’ who previously fought for the UFC and is known for his wild fighting style.

Carlyle could find opportunities for success if he can force McKee into a scrappy fight that focuses on headhunting instead of technique. Meanwhile, McKee just needs to stay calm and lead the dance because he has better fundamentals everywhere. ‘Mercenary’ should finish the fight within the first two rounds.

After stumbling early in his career, Aaron Pico has won six consecutive bouts; can the young star make it seven in a row by besting Jeremy Kennedy?

Aaron Pico had high expectations early in his career but ultimately started with a 4-3 record. Since then, the Jackson Wink product has won six straight fights, including an impressive win over Justin Gonzales.

Jeremy Kennedy is not an easy opponent for anyone. Holding a 17-3 record, the Canadian made a statement by beating Emmanuel Sanchez last time out. Kennedy will bring the fire, but Pico’s wrestling and power should be too much, leading to a decision win for the young superstar.

Although stylistically it might not be the sleeper matchup, Max Rohskopf vs. Mike Hamel is the fight to watch. Rohskopf is infamously known for quitting on the stool in the UFC, but the wrestler has reinvented himself with Cage Warriors before signing with Bellator.

Rohskopf’s promotional debut will not be easy as Hamel’s 9-5 record doesn’t tell his story. Hamel lost by decision against Adam Borics and Usman Nurmagomedov while scoring wins in his last two fights against Bryce Logan and Killys Mota.

Rohskopf wants to make a statement in his Bellator debut, but Hamel can give any Bellator lightweight trouble. Keep an eye on Rohskopf because he could be the newest contender of the division.