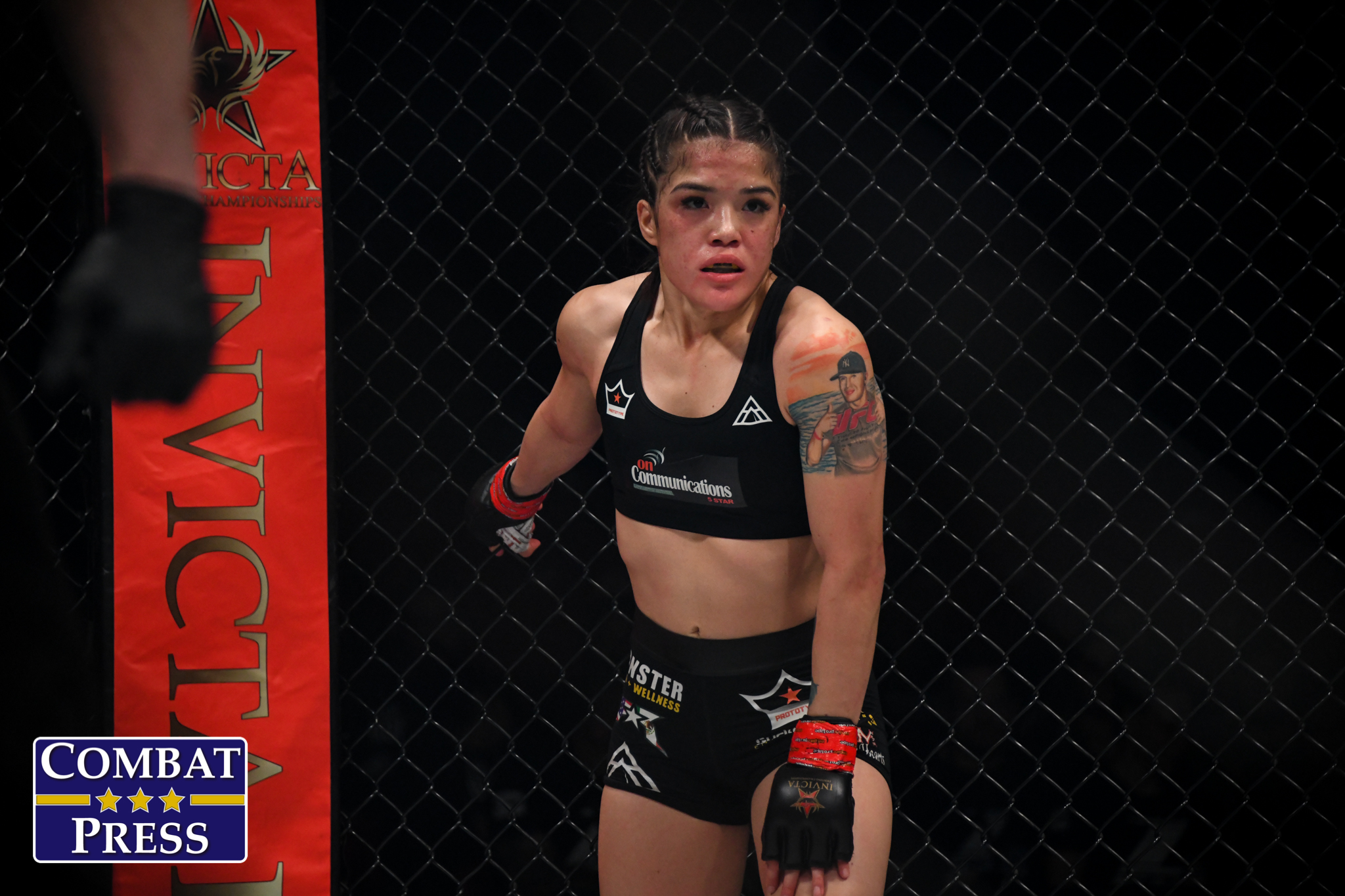 Cortez brings in a 7-1 record, which is more impressive when you consider that the loss was in her pro debut and she has won seven straight since then, including her most recent one in November. That fight was her UFC debut — not counting her appearance on Dana White’s Contender Series — and her bantamweight debut.

What does Cortez do well? Honestly, everything. I like her sense of awareness, her knowledge of when to up the aggression and when to do the opposite, and her instinct of when to take the fight to certain areas. She’s going to need that here, because she is fighting someone who can make this a chess match. Furthermore, Egger will have a height advantage and, I assume, a reach advantage. By the time they enter the cage, I expect Egger will have a size advantage too.

So how does Cortez counter this? Movement, for starters. By movement, I don’t mean she should run away or avoid exchanges. Yes, she should do some circling, but not to avoid exchanges. More so, she should do it to get angles, find where she can best land either strikes or takedowns, and avoid the clinch. Perhaps I am wrong, but I don’t feel like the clinch game plays to Cortez’s favor here. She is fine in that position, but Egger is going to be bigger and stronger and will be able to put Cortez’s back against the cage and possibly take her down, which is not a good place for Cortez to be. In addition, the movement will get Egger moving, and the cardio advantage lies with Cortez. Cortez is used to going the distance. Egger, while she did fight a month ago, only went one round and before that had only one fight each in 2018 and 2019. So, Cortez’s plan might be to try to get Egger tired and then take over late in the fight. The longer it goes, the better Cortez’s chances.

Again, Egger is taking this bout on short notice after having just fought a month ago when she beat Cinja Keifer. However, make no mistake, this is not just some late-minute replacement who didn’t actually deserve a shot. Egger is a UFC-caliber fighter. She’s 5-1, and her only loss came to Alexa Conners, who is no easy fight. Had she been more active, I firmly believe she would already have been in the UFC. One does have to wonder how Egger will respond here, though, after having been rather inactive and now fighting twice in essentially a month. That last one was a short fight, which helps, but to do a camp, fight and then have little recovery time before starting a mini camp, can take a toll on a body.

In this fight, Egger probably has one goal: to get the fight down. Her stand-up is clearly her weakness, but it is a little better than she gets credit for. While the technique isn’t always pretty, it doesn’t mean what she does can’t be effective. However, she will be at a disadvantage on the feet, whereas she’s very good on the ground.

If Cortez does utilize the movement I suggested above, Egger doesn’t want to follow. Instead, she’ll want to cut off the cage. When you follow, you basically are doing just that — you’re following your opponent’s movement. To cut off means to step to the side and limit how far your opponent can move. Egger is a judo black belt. She knows how to get you to the ground, so she will probably look to close the distance, hopefully cutting and not following, and look to get the clinch and the takedown. If she does this and can get on top, then she can not only win but finish. As an added bonus, even if she is on her back, she’ll be OK.

If Egger can’t get the takedown and the contest stays on the feet, then she’ll need to try to make it ugly and see if she can get Cortez to engage in a brawl where technique becomes less of a factor and it’s sometimes about who lands the big shot first. I don’t make predictions or anything, and I am not about to do so here, but Egger has a much better chance than people seem to be giving her.

This fight beat out three others in my Twitter poll, and I am kind of glad it did, because this fight really interests me. The winner could move very close to being in line for a shot with the UFC.

One thing I really like about Juśkiewicz is that she can be aggressive. One thing I don’t like, though, is that this aggression often leads her to chase. With someone like Wójcik, who throws the proverbial “punches in bunches,” that can lead to getting caught while off balance. This is one fight where Juśkiewicz might want to be a little more careful, tone it down a bit, and let Wójcik come to her. Another reason for this is because she telegraphs her right hand powershot, and Wójcik has a tendency to keep her hands low. If she lets Wójcik come to her, then it might allow her to land that hard shot and make Wójcik less likely to pick up on when she’s going to throw.

Off her back, Juśkiewicz is very active in working to get up, which is great, but it in some ways looks more like panic and leaves her open to passes. She is fighting someone who is very good at being active on the ground, too. The good news is that Wójcik will want this fight on the feet. Juśkiewicz needs to be technical and use good movement, both with her head and feet, and slow the pace if she can. If she is getting hurt or having trouble on the feet, then the takedowns will be there for her. I don’t want her to clinch for them, and I will explain why in a bit. She might want to try to use Wójcik’s aggression against her and get a double leg when Wójcik comes in.

Wójcik, like her opponent, is aggressive. She will come forward and try to bring the fight to her opponent. In doing so, she sometimes keeps her hands low. She might want to clean that up here, because she’s up against someone who will trade with her. Something I really love about Wójcik is that when her back is on the cage, she has great head position and is very good at framing. She uses her forearm to dictate where her opponent’s head goes. She pushes the head back or down at an angle and opens things up for elbows.

While I expect this fight to mostly take place on the feet, I anticipate that a good portion of it will be in the clinch. If they do tie up, Wójcik will want to get it to the cage. If her back is against the cage in doing so, that is totally fine. Wójcik likes to set the pace, and she’s especially going to want to do this here. A big first round for her can really make Juśkiewicz more desperate. If that happens, a desperate Juśkiewicz is going to be more likely to fight the kind of fight Wójcik wants. Also, if Wójcik then decides to put Juśkiewicz on her back, she can accomplish a lot there, because, as I said earlier, Juśkiewicz, while being very active off her back, also leaves herself open to those passes.

If you are looking for more female fights, Bellator 248 has Maguy Berchel and Lucie Bertaud. Meanwhile, Ansgar Fighting League: Valkyries, which can be seen right here on Combat Press via Fite TV pay-per-view, is an all-female card headlined by Audrey Kerouche and Micol di Segni.