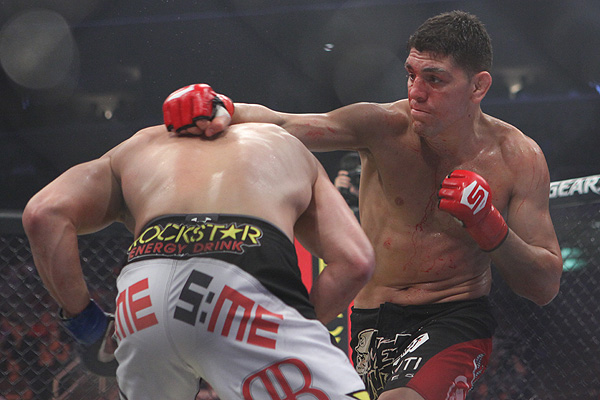 UFC 266 Betting Preview: What to Take and One to Avoid

The UFC is just days away from putting on an action packed UFC 266 card, featuring two incredible title fights, the return of Nick Diaz and several exciting bouts that make up the preliminary card. Let’s look at some of the top bouts to bet for the win.

This is by far the most attractive parlay combination for UFC 266 I have yet to see. Chris Daukaus and Merab Dvalishvili are relatively strong favorites and rightfully so. Daukaus is riding a four-fight knockout winning streak and has quickly established himself as a top-ten UFC heavyweight. The Philadelphia native is a born knockout artist who has finished all three of his UFC opponents by first-round knockout. Expect the streak to continue when he takes on Shamil Abdurakhimov who is an aged heavyweight coming off a devastating TKO loss, via elbow, to Curtis Blaydes. Daukaus is one of the few heavyweight prospects with the ability to find himself in the top five sooner rather than later.

Merab Dvalishvili should be as safe as they come for building a reliable parlay play for this coming weekend. The Georgian native is a gifted wrestler with a relentless pace and ground attack, which generally results in his opponents trying to survive off their back for three straight rounds. He faces the toughest test of his career in Marlon Moraes who is riding a two-fight losing streak, with both losses coming by TKO. Expect Dvalishvili to play it safe and wrestle his way to another unanimous decision as he quickly enters the contender discussion at bantamweight.

What’s a good parlay without throwing in the underdog call of the evening? That’s where Cynthia Calvillo comes in to play when she takes on devastating knockout artist Jessica Andrade, who finds herself 1-3 in her last four UFC appearances. Calvillo has had issues making weight a few times, but seems to have corrected her weight-cutting problem in her last two outings. Despite Andrade’s heavy hands and ability to knockout anyone out that dares stand in front of her, Calvillo’s skillset is near perfect for shutting down the Brazilian’s offense and pulling off the upset win. The California native will use her height and reach to blast Andrade with quick strikes, and continuously circle away from the power she possesses, before securing a takedown where she will exploit the weak ground game of Andrade. If Calvillo pulls off the upset in this one, she will likely find herself in the conversation of title contention due to the status of the women’s flyweight division.

Diaz versus Lawler is the obvious one to avoid for several reasons. First and foremost, Diaz has not seen professional mixed martial arts competition for five-plus years and looked suspect, at best, in his final two fights in the UFC – the first against George St-Pierre and the last against Anderson Silva. St-Pierre pummeled Diaz for five straight rounds, as the challenger had no answer for the former champion’s dominant wrestling. This lead to an uneventful and non-competitive affair. He followed that one up with an entertaining decision loss to Silva shortly after. However, that one was eventually overturned to a no-contest, after both fighters failed USADA testing.

The bout between Diaz and Lawler was recently updated to a middleweight bout, instead of the agreed upon welterweight bout, due to the request of Diaz and his team. This likely stems from Diaz being transparent about not being able to hit 170-pound mark, or even come close to it, which would have possibly resulted in the bout being cancelled had he weighed in significantly over the limit. Lawler, on the other hand, has had a tough going in his last four UFC appearances, dropping all four fights. The former welterweight champion, who has taken part in some of the most memorable bouts in UFC history, has not recorded a victory since Jul. 2017, which came at the expense of an undersized Donald Cerrone. The fight with Diaz may very well be the most high-profile bout of the card, due to the return of one of the most well-known faces in mixed martial arts history, but ultimately provides little predictability and not much upside from a betting perspective. As of Wednesday morning, Diaz sits at a +100 underdog while Lawler is the -120 betting favorite. If you are hell bent on getting in on this bout, taking Diaz at the underdog value is the only play that makes sense. The former Strikeforce superstar was granted his request for a middleweight bout, which certainly provides an advantage as well as holding the mental edge over an opponent he has defeated in the past. My advice? Steer clear.

The odds on this bout are puzzling to the say the least. Despite Hooker finding himself on a two-fight losing streak, the New Zealander is still undoubtedly a top-ten lightweight who has continuously fought top-tier competition his last several UFC outings. He takes on Haqparast, who has fought average lightweights at best thus far in his UFC career, yet was rewarded with a top-ten opponent. Take the action on Hooker for a nice and easy win, as he finishes Haqparast by TKO and returns to his winning ways.

Blaydes has certainly shown his ability to get knocked out by powerful punchers. He has suffered two TKO losses at the hands of now-champion Francis Ngannou, and he was completely cold-cocked by a nasty uppercut at the hands of Derrick Lewis in his last outing. Blaydes will look to rebound after establishing an impressive four-fight winning streak, prior to the loss to Lewis. However, he will have to get past Rozenstruik, who similar to Lewis, but possesses a more developed ground game to compliment his knockout power.

The Surinamese native has made a career out of putting people to sleep which has culminated in a 12-2 professional record with 11 of those wins coming by way of knockout. While I do expect Blaydes to rebound with a boring unanimous decision victory, the chance of a Rozenstruik knockout victory is hard to pass up for the +400 upside. Sprinkling a little action on this can prove to be quite lucrative if Rozenstruik does what he does best.