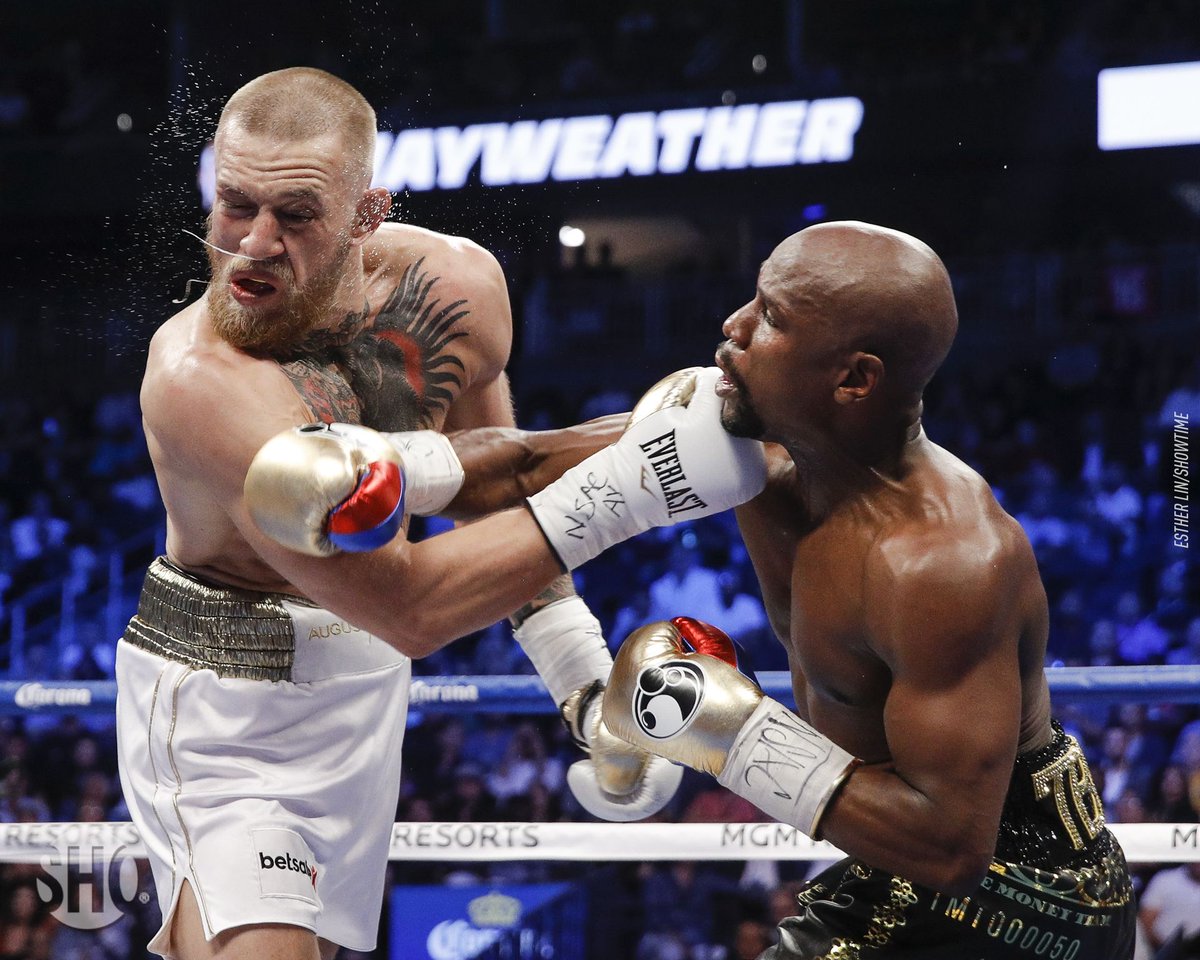 The highly anticipated contest between Floyd Mayweather Jr. and Conor McGregor turned out to be a more entertaining fight than we could have anticipated. McGregor did well in the early going, mostly as a result of what appeared to be Mayweather holding back and giving the Irishman the chance to tire out. “Money” started to gradually step up the attack and began walking McGregor down more as the rounds progressed. The writing was on the wall in the seventh when Mayweather began to land much more consistently on McGregor. With each passing round, Mayweather’s control of the fight became more and more clear. The boxing legend dominated the ninth. After another sustained assault in the 10th, referee Robert Byrd called it a night. McGregor was out of gas and taking lots of punishment at the end.

If there’s one thing that the Mayweather/McGregor contest really deliver on, it was in drawing the interest of people who don’t normally tune in to fights. Whether it was a stop at a local fast-food establishment or a glance at a Facebook feed, the fight dominated the discussion far beyond the typical combat-sports community.

It’s great to see McGregor talking about a return to the UFC. He’s a huge star, and the likelihood of his return to the cage seemed slim going into his boxing debut. He’s millions of dollars richer now, but it’s good to see that he’s not done in the eight-sided cage.

While we’re on the topic of boxing, Mayweather and McGregor weren’t the only men in the ring this weekend. HBO’s boxing offering included Miguel Cotto, who fought Yoshihiro Kamegai. This one went almost exactly the way you’d expect it to go. Kamegai was gutsy as hell. He kept charging forward into Cotto all night long, but he took a vicious beating for his efforts. Cotto landed more than twice as many punches on Kamegai in the fight and hit him with a ridiculous amount of power punches. Almost any other fighter would’ve been knocked out several times over.

The HBO card also featured a fun, action-filled fight between Rey Vargas and Ronny Rios. Vargas used his height and reach to keep Rios at bay and outbox him. Rios gave a gutsy effort and had his share of success in the fight, but Vargas was a step or two ahead of him all night.

In the opening bout of PBC on FS1 on Friday, Austin Dulay scored an easy TKO victory following three rounds of action against Carlos Padilla. It didn’t seem like Padilla came to put up much effort. He went down from a light flurry of shots and then retired in his corner after the round. Dulay, meanwhile, looked like a solid, young talent.

PBC on FS1 also produced a strong candidate for “Knockout of the Year” between Hugo Centeno Jr. and Immanuwel Aleem. The fight appeared to be even after two rounds, but Centeno landed a perfectly timed left hook in the third that left Aleem completely unconscious. Centeno has been a fun fighter to watch already in his career, and a win like this is definitely gonna keep the interest high for this young banger.

Sergiy Derevyanchenko and Tureano Johnson fought in an eliminator for the IBF middleweight championship at the same event. Derevyanchenko was in full control and kept beating Johnson to the punch in almost every exchange. Johnson showed a ton of heart throughout the bout and kept fighting back gamely, but he never managed to win more than a couple rounds at best. It was an impressive showing for Derevyanchenko.

Murthel Groenhart finally captured the GLORY world title at GLORY 44. In his third attempt at the 170-pound strap, Groenhart edged former two-time defending champion Cédric Doumbé in a closely contested fight. Groenhart played a smart game and forced Doumbé to come to him, rather than open himself up for the Frenchman’s excellent counters. The fight could arguably have been scored for Doumbé 48-47. The win for Groenhart could set up a rubber match down the line.

Harut Grigorian potentially set up a rematch with Groenhart for the GLORY welterweight title with two victories in one night to capture the contender tournament at GLORY 44. Grigorian was brutally knocked out by Groenhart just over two months ago, but that didn’t stop the skilled Armenian-Belgian kickboxer from winning tough battles against Karim Benmansour and Antoine Pinto.

Finally, in the world of MMA, which was largely overshadowed this weekend by the Mayweather-McGregor bout, Bellator MMA and the Legacy Fighting Alliance led the pack.

There are plenty of interesting facts in the fallout from Bellator 182, but A.J. McKee Jr.’s Bellator best active winning streak of nine fights is making the headlines. McKee has been given a step up in competition against the likes of Dominic Mazzotta and Blair Tugman, but his victory over Tugman really should be the final proof Bellator needs to justify elevating McKee into the featherweight title picture.

LFA 20 was heavy on split decisions, including in the headlining welterweight throwdown between Nick Barnes and Chad Curry. Only Travis Perzynski delivered a big finish on the night, but will the UFC or Bellator bite on a guy who has lost to Nik Lentz, Tommy Speer, Daniel Straus, Alonzo Martinez and Yoshihiro Koyama?

Deep Jewels 17 also featured controversial 12-year-old amateur fighter Momo Shimizu. She scored her second career win in two bouts with a decision nod over Tomomi Souda, 39. While this fits right in with the typical Japanese affinity for freakshow fights, what if Shimizu turns out to be a future star in the sport? The NBA scours middle school basketball courts in its attempt to find the next Kobe Bryant or Lebron James. Is MMA next?

On the MMA news front, it looks like we’re going to start seeing some of those Dana White’s Contender Series winners in official UFC action. Mike Santiago, who earned his contract with a win on the Aug. 22 edition of the Tuesday fight series, will step inside the Octagon less than two weeks later at this weekend’s UFC Fight Night 115 event. He’s a late replacement for Nick Hein against Zabit Magomedsharipov. The 6-foot-1 Russian featherweight has won 12 of his 13 pro fights, but this is his UFC debut and it comes after nearly a year on the sidelines. Santiago could turn out to be the first really big winner from DWCS.