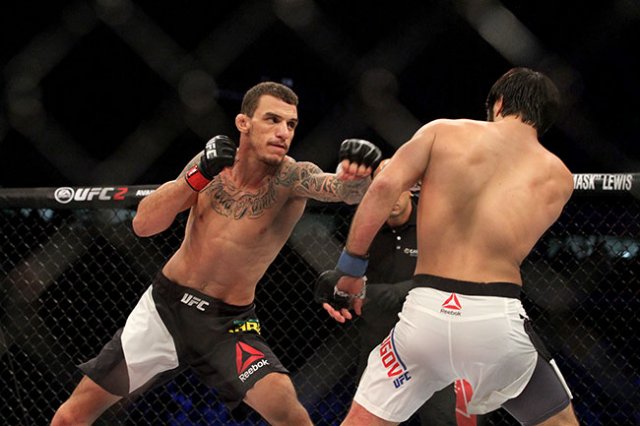 One to Watch: UFC Vegas 30 – Renato Moicano vs. Jai Herbert

UFC Fight Night: Gane vs. Volkov is headlined by a pair of heavyweight strikers, but the main-card opener between the far smaller lightweight duo of Renato Moicano and Jai Herbert also promises to result in fireworks. These men are at different stages of their UFC careers. Their fun fighting styles make this a potential candidate for the evening’s “Fight of the Night” award.

Moicano signed with the UFC in 2015 as an undefeated prospect with a 7-0-1 mark. He went 3-0 early in his promotional run, with decision wins over Jeremy Stephens and Zubaira Tukhugov. He has also notched submissions over Cub Swanson and Damir Hadžović, as well as a wide decision victory over highly ranked featherweight Calvin Kattar.

Moicano moved to the lightweight division for his last outing, where he was stopped by dangerous striker Rafael Fiziev. Moicano knows his back is against the wall. He will not want to drop another opportunity here. The Brazilian has solid kickboxing fundamentals and an educated jab, which he used to keep Kattar, a superb boxer himself, at range. Moicano’s Brazilian Jiu-Jitsu black belt has also been on display in the UFC, where he has recorded two first-round submissions. He is particularly dangerous once he gets to the back, where he’ll attack with a rear-naked choke.

Prior to signing with the UFC, Herbert was the Cage Warriors lightweight champion. He won the vacant belt by knocking out Jack Grant. Herbert then defended the strap with a stoppage of Cain Carrizosa in the first round. Herbert made his Octagon debut against Francisco Trinaldo in July 2020. Despite dominating the first two rounds, Herbert got caught with a looping overhand right from the seasoned UFC vet and suffered a loss. The Englishman’s performance in the first two rounds cannot be discounted, though.

Herbert is a technical striker with great kickboxing skills. He prefers to strike and will utilize his great takedown defense to keep the fight on the feet. “The Black Country Banger” trains out of Team Renegade, one of the standout British gyms, and continues to sharpen his skills. With stellar training partners, such as Leon and Fabian Edwards, Herbert can be expected to flash continued improvement from fight to fight.

Despite an abundance of skill between these two competitors, each man is coming off of a knockout loss. With strategic UFC marketing, both athletes will have extra pressure placed upon them to prove that they are the real deal. Moicano has had multiple stumbles in the UFC, whereas Herbert’s lone UFC fight ended in defeat. As a result, we could see an electric start to this contest, with both combatants looking to stamp their mark and prove that they are elite.

An MMA fan should always pay attention to the first fight on a UFC main card. It’s usually placed there as an explosive appetizer to the rest of the fight night. This is no exception. These guys know that this is a must-win fight. While the betting line favors Moicano, likely as a result of his experience and ground game, Herbert is capable of outworking the Brazilian on the feet. With finishing ability on both sides, the match-up between Moicano and Herbert is certainly one to watch.