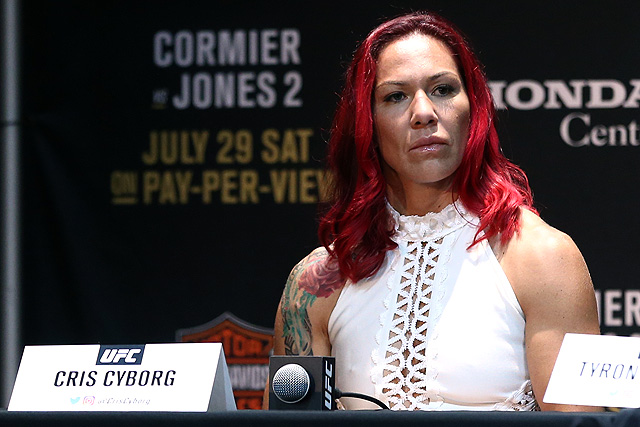 Are Cris Cyborg’s UFC Days Coming to an End?

As the end-of-year UFC 232 bout between UFC women’s bantamweight champion Amanda “The Lioness” Nunes and women’s featherweight queen Cristiane “Cyborg” Justino inches closer, so does an end to Justino’s time in the Octagon.

Following a rocky history with the Brazilian, UFC President Dana White and Cyborg mended fences and the intimidating striker joined the organization. Justino debuted for the company at UFC 198 in 2016. She was crowned the champion of her division at UFC 214 just over a year later. However, this seems to be where her discontent started.

From the time of her debut to her most recent fight against former Invicta FC bantamweight champion Yana Kunitskaya at UFC 222 in March, Justino has yet to face any true 145-pound women.

Thanks to this, she told Brazilian outlet Combate in July, “I think this fight [with Nunes] will be my last in the UFC, because my contract goes until March and I doing this fight in December, I think it will be the last one the guys will see me fight.”

This announcement came despite the fact that the UFC has at least partially based the current season of The Ultimate Fighter, a co-ed edition featuring female featherweights and male heavyweights, around finding Justino’s next challenger.

During the same Combate interview, Cyborg said, “They made the TUF house and cut all the girls in the 145-pound [division.] They just signed up girls who can beat 135-pound [fighters…] There are girls that can fight, from my category. Only they do not want to, they want me to fight only with Amanda.”

Justino said this around two months after saying of the women on TUF 28, “I think my division is going to be the strongest division because the girls can be bigger, powerful — they can be faster. We have girls, and it’s going to continue. I’m really happy about this.”

So, what could Justino’s next move be when she arrives at a fork in the road in March 2019?

A series of fights against the top half of this list of potential challengers could take Cyborg the length of an entirely new deal. However, she seemed to double down on her previous sentiments last month.

“I still have a lot of things left in my career,” Justino said in August. “I have two fights left in the UFC and I hope this works well. I have a dream fight boxing fight and I am for sure gonna fight a boxing fight. If it’s not gonna be the UFC, maybe I’ll fight Julia Budd in Bellator.

“I think I have a lot of doors I can fight [in]. Maybe I could do a Grand Prix, more than one fight per day in Japan. A lot of things can happen. I don’t think this is the finish of my career, this is just one more challenge in my career. I’ve already overcome a lot of things in my career, and if I don’t fight in the UFC anymore, for sure I’m gonna find other ways to keep growing my legacy.”

Justino likely has Bellator in her sights. Invicta FC has elevated many a woman to the UFC, but Cyborg finished all comers while there. She could be looking for new tests, making a return to Invicta less likely.

Cyborg could jump the line to face Budd, the Bellator featherweight champ, fairly quickly given her experience and the precedent set in the cases of former UFC fighters/current Bellator champions Rory MacDonald, Ryan Bader and Gegard Mousasi, as well as title challenger Benson Henderson.

While facing the 12-2 Budd really feels like the only option for Justino at the moment, Bellator has more to offer her, including what she mentioned above and more:

Additionally, Bellator has only a few weight classes for female athletes, which could actually be good for Justino. Flyweight and featherweight are the only female divisions under the organization’s umbrella. This could mean not only would Justino be the face of the women’s featherweight division, just like she has been in every other major promotion, but it could also lead to more bookings. Cyborg is eager to fight and do so now. Bellator has the ability to make this happen.

A positive relationship with Bellator’s Scott Coker dating back to his time as the head of Strikeforce, the promotion that made Cyborg famous, could be the deciding factor. Justino was in attendance for January’s Bellator 192 event at The Forum in Inglewood, Calif.

“She had just texted me and said, ‘Hey, I want to come [to the fights],’” Coker told MMAjunkie following the card. “She lives in L.A., [and] she’s always welcome to any of our fights that we do. She’s been around, she’s a legend, she’s a pioneer of female fighting. She used to fight for me [in Strikeforce], so we always had a good relationship. She wanted to come to the fights, and it was really that simple. I said, ‘Yeah, come over.’”

At the time, this was all in good fun. However, it could become a reality very soon.

“She did text me one thing before she left,” Coker said. “She said, ‘Stop taking all the girls [into Bellator].’ I just laughed. She’s under contract [with the UFC]. We’re not going to interfere with anybody’s contract. We have plenty of fighters we’re booking and fighting. We have our hands full with this [heavyweight] tournament. So to me, it was just tongue in cheek.”

Once Cyborg is done with her current contract, however, this could turn serious. Her days in the UFC could be coming to an end.