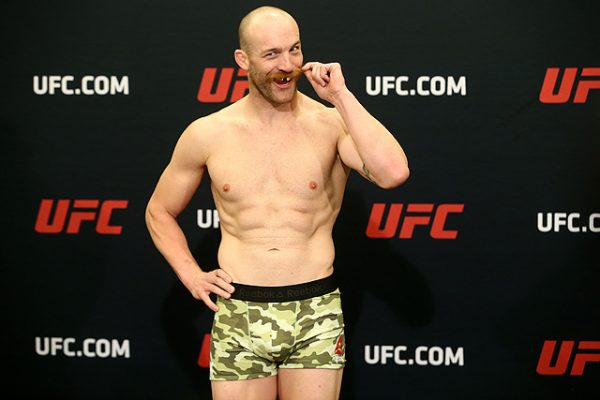 Have you ever spoken to somebody that doesn’t like visiting Colorado? Likely not. Sure, there are outliers who’ve had a bad experience here and there, but, for the most part, what’s not to like? Between the myriad of mountain activities, restaurants, sports events, craft breweries and 300 days of sunshine per year, it’s hard to not have fun in the Centennial State.

UFC light heavyweight Patrick Cummins recently made Colorado the home base for his training camps, but that’s not all he does in the Rocky Mountains now. While he’s most notable as a two-time NCAA Division I All-American wrestler and two-time member of the U.S. National team, his real passion lies on the singletrack trails.

“I’m a huge mountain biker,” Cummins told Combat Press. “This place is pretty epic when it comes to the mountain biking. I’m an outdoor guy. I love hunting, fishing and all that stuff. It’s just a smart move. I never actually moved to Florida for that reason. I could never live in that flat, humid state.

“I’ve hit pretty much most of the Front Range [mountain bike trails]. Buffalo Creek is really awesome, and I just did Lair o’ the Bear. I’ve also done some backcountry stuff with a friend of mine who lives in Highlands Ranch, and some neighborhood trails. I’ve been getting a good mix.”

Just like they have for many other transplants, the mountains might be one of the many draws that keeps Cummins in Colorado. However, it was a coach that brought him here. Cummins currently trains at Genesis Training Center in Arvada. This is the home camp of guys like UFC lightweight Justin Gaethje and Bellator lightweight Brandon Girtz. Genesis has a new coach to add to the stable, but he is definitely anything but a new face in the sport.

“I came from doing my training camps in Florida with Blackzilians, and the head coach there was Neil Melanson,” Cummins explained. “He just relocated to the Denver area, so I followed him. For my last two fights, he was my head coach, and he’s primarily a ground guy. We picked up striking with [Genesis owner] Jake Ramos, and everything is clicking really well.”

Cummins has been doing great under Melanson. He won his last two fights over Gian Villante and Jan Blachowicz. Cummins was set to face Corey Anderson in November, until he got sidelined with a staph infection. Long healed and chomping at the bit to get back into action, the Pennsylvania native will finally get a crack at Anderson on Saturday night at UFC Fight Night 128 in Atlantic City, N.J.

“It’s been forever,” Cummins said of his scheduled fight with Anderson. “It got taken away and then put back on the table, so I was definitely happy with that. I wished I could’ve slid a couple other fights in there in the meantime. It’s definitely a fight that I want, and I’ve been pushing for it. Stylistically, I think it’s a good match-up for me. I think coming to Denver, doing nine to 10 weeks here, has really upped my conditioning.”

Anderson ended up facing Ovince Saint Preux in November and lost by a nasty head-kick knockout in the third round. It was his second knockout loss in a row. Anderson is badly in need of a win over Cummins, but this is not a great match-up for Anderson. On the feet, they are very similar fighters, but Cummins has the superior wrestling pedigree that really puts him at a big advantage both in the clinch and on the ground. Neither of these guys minds going the distance, but both men will be looking for a finish.

“If people know me, they know what to expect already,” Cummins said. “I’m a guy that likes to go out there and go balls out for 15 minutes, no matter what’s going on. I’m going to get knocked down, I’m going to be bloody, I’m going to be cut, I’m going to have a black eye, but I’m never going to stop. I think that resonates with people, but, with all that being said, I’m trying to cut down on some of that stuff, just to keep my health in check. I’ve been trying to work on moving my head and, you know, stay elusive.”

Health is important, especially in one of the healthiest states in the country. Cummins has only been in Denver for a few months now. He hasn’t even had time to officially move there, but he plans on doing so after his fight. However, it’s not all mountain biking and fishing that he expects to occupy his time. His profession comes first and foremost.

“I want to set up shop here and get settled,” said Cummins. “There are some really high-level guys fighting out of Denver at the moment, but I really think we can build our team. A lot of people know Neil Melanson and his style, but I think that you have to be exposed. I think people are really going to take notice after a couple good wins, like, ‘Wow. What are these guys doing?’

“For me, all it took was an hour session with Neil, and I looked at him and said, ‘Look, man. Whatever you do, wherever you go, I’m following.’ He was the answer for me, and he felt that all along. Once people catch on, I think it’s really going to bring something special to the MMA market in Denver.

“Jake Ramos is the owner of Genesis, and they’ve partnered up and decided that’s what they want to do. There’s definitely a lack of big guys. There’s not a lot of [205-pound fighters] out here, and I want to bring that to the area. I think we can really pump up this training atmosphere, and there’s always something to be said for training at altitude. I’m excited to get down to sea level to see how it feels.”

Melanson’s move to join Ramos and the Genesis team has flown largely under the radar. His goals for Cummins, Abel Trujillo and some other former Blackzilians is to build another solid team in the Denver area, comprised of fighters with the right motivations.

Cummins’ move to Colorado has come with nothing but the best intentions. Sure, there is a ton of fun stuff to do, but it all coincides with his desire to become a better fighter. In addition to the formal strength and conditioning that he does at Landow Performance, he relies on mountain biking to bump his cardio. Nothing is better than stripping out the bells and whistles that most of the hardcore bikers use for support and getting down to the basics of a two-wheeled machine.

“I’m about as bare-boned as it gets,” Cummins admitted. “Some people would call me a psycho, but I like to ride single-speed. It’s just a regular hard-tail mountain bike. I like crushing some hills and getting my conditioning up there.”

On Saturday night, Cummins will be back in the cage for the first time since last July to face a guy who has been on his radar for way too long. He will get a chance to test his high-altitude conditioning at sea level before coming back to help grow his new team, as well as his new life in Colorado.