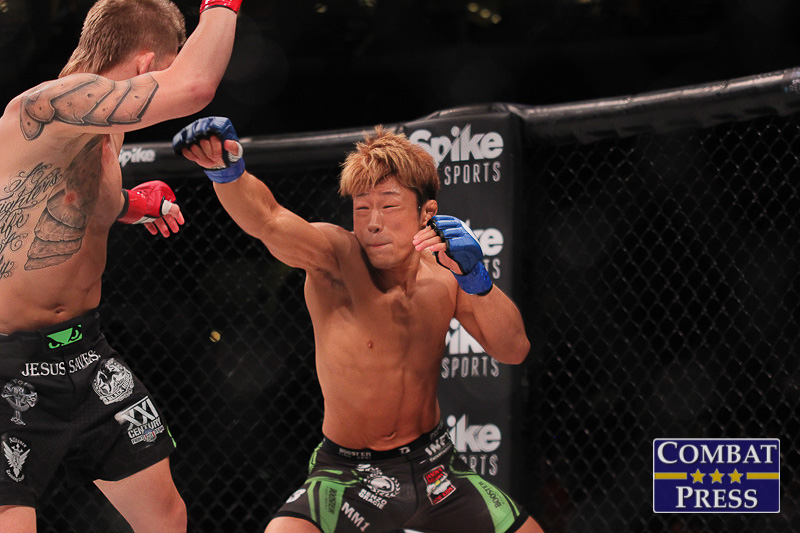 There are whispers that Legacy head Mick Maynard might be UFC-bound, but for now he’s still at the helm of his own Texas-based promotion. The company is gearing up for its 59th offering, and the headliner features a veteran test for an undefeated up-and-comer. The fighter with the perfect record is middleweight Trevin Giles. His seasoned opponent is Ike Villanueva.

The 24-year-old Giles has already made the rounds in the “Triple A” level of MMA. His pro debut came under the Legacy banner in 2014. He needed just 75 seconds to pick up his first victory and then just over two minutes to capture his second win, also in the Legacy cage. After two TKO victories, including one over Larry Crowe, with the Fury FC promotion, Giles again returned to Legacy and notched a second-round submission win. He strayed once more, this time heading to the Caribbean Ultimate Fist Fighting organization for another TKO win. He made his way to the Resurrection Fighting Alliance next, and he turned in a second-round submission finish of fellow prospect Josh Clark. “The Problem” has certainly been a problem for every man who has crossed his path. The Elite MMA Houston export has never seen the scorecards.

Villanueva has had his fair share of ups and downs since debuting in 2008. He suffered a defeat in his pro debut, but turned in victories in his next three appearances. This set up the Metro Fight Club product for a bump up in competition, and he couldn’t answer the challenge. Instead, Villanueva lost to Marcus Sursa and Cody Donovan. Following another two wins, he was again thrust into a tough fight when he met Artenas Young. Young dropped Villanueva, sending the fighter to smaller regional promotions in search of a fresh slate. Villanueva posted two wins, but then lost three straight, including one to the aforementioned Crowe. “Hurricane Ike” has recovered nicely, however. He has made two Legacy appearances, one Bellator appearance and one appearance for Fury FC, and all but the most recent of these fights ended with a quick first-round stoppage. Overall, the 32-year-old has nine wins via strikes. However, he has also suffered three losses by knockout and four via submission. He has never tapped an opponent.

If this fight remains on the feet, it could turn into a race to land the first clean shot. Both men have scored some big — and quick — knockouts. However, Giles appears to hold a real edge in the grappling department and could be inclined to go for the takedown early and often, but he’s shown a preference for standing battles.

Giles is such a strong ground fighter, so a stand-and-bang strategy would be a huge mistake against a veteran who has shown more vulnerabilities on the mat and more threats on the feet. Giles, meanwhile, has demonstrated the composure to get out of bad positions on the canvas and flip the script on his opponent. Even if Giles gets rocked by Villanueva, he could turn the tide if Villanueva follows him to the ground. Ultimately, it seems as if Giles has more routes to the victory, whereas his opponent will have to hope that his punches find a home. The quick finishing ability of the up-and-comer will come into play in this one as he works to a first-round submission victory.

If you’re looking for the most stacked — in terms of prospects, anyway — regional or international card this weekend, you won’t find it in Texas. Instead, you’ll have to head overseas to Russia, where the Absolute Championship Berkut promotion is at it again. ACB returns with its 45th offering, dubbed “Sibera vs. Caucasus.” Along with two titles fights, the lineup also features an interesting showdown between bantamweight upstarts Oleg Borisov and Tural Ragimov.

Borisov has a head-turning 17-1-1 mark to his name. The 33-year-old did notch his pro debut win in 2007, but he didn’t start fighting regularly until late 2011. Overall, the Krepost Fight Club product won his first three fights before dropping a unanimous verdict to Timur Valiev for what still stands as his only career defeat. Borisov has gone a staggering 14-0-1 over his last 15 fights. This stretch includes notable wins against veterans João Paulo Rodrigues, Paata Robakidze and Filip Macek and a draw against Tomáš Deák. He has won eight fights via strikes and one contest by way of submission. He’s a powerful and aggressive wrestler with obvious knockout ability.

Ragimov was born in Azerbaijan, but he trains out of the Mamishev Team in Russia. He has a shorter resume than his counterpart, but the resume features the more notable names. Ragimov has armbarred accomplished veterans Lee Morrison and Antun Racic, and he suffered a TKO loss to Ivan Buchinger in a five-round featherweight title affair in M-1 Challenge. Ragimov, like his contemporary, has seen action at heavier weights. He debuted in 2010 to the tune of a four-fight winning streak by 2011. Then he suffered his first loss, a submission defeat against Ariel Abergel. Ragimov bounced back with five straight wins before colliding with Buchinger and has tallied another two straight since the loss. He was set to rematch Buchinger in 2015, but a case of bronchitis put Ragimov on the sidelines.

Borisov can be a relentless takedown artist who has a stifling top game, or he can be a somewhat flat-footed, haymaker-throwing striker. When he’s standing, he does have a tendency to look like Kamal Shalorus, another strong wrestler who would wing in single punches in the hopes of scoring a brutal knockout. However, Borisov, unlike Shalorus, is more willing to transition between those haymakers and takedown attempts. One of the most notable attributes for Borisov, however, is his size. The Russian fighter was considered small when he was fighting at 145 pounds or above, but his 5-foot-3 frame is even short for the bantamweight division, where Ragimov will tower six inches above his opponent. He has six submission wins and four victories by way of strikes.

In Ragimov’s first career loss, he was taken down and controlled on the ground numerous times throughout the two-plus rounds of the affair. When he did get top position, he was either swept and reversed or ultimately jumped right into the fight-ending triangle choke. If Abergel could do this to Ragimov, it’s a safe bet that Borisov can follow a similar blueprint en route to victory. Borisov’s combination of wrestling and pure power will be too much for Ragimov, regardless of his height advantage.

It’s not often that a Monday event makes its way into this preview feature, but it’s not often that a Monday event features such a strong lineup as the eighth edition of Vale Tudo Japan. The card, which streams live on UFC Fight Pass, delivers the likes of Takeshi “Lion” Inoue, Efrain Escudero, Koshi Matsumoto and undefeated prospect Anthony Do in support of the main attraction, a lightweight scrap between Isao Kobayashi and Yutaka Saito.

Kobayashi launched his pro career in 2008 as a 19-year-old. He won the 2009 Pancrase Neo-Blood lightweight tourney and the 2011 Pancrase Lightweight Grand Prix. The Sakaguchi Dojo product compiled a 15-1-4 record as a lightweight, capturing the lightweight King of Pancrase crown along the way, before his tumultuous run in the featherweight division. The southpaw’s stint as a 145-pounder started off strong enough with a win over the aforementioned Inoue, but Kobayashi stumbled against three of his next five opponents to bring his featherweight mark to a mediocre 3-3. Now, the judoka is set to return to lightweight with Vale Tudo Japan for this bout against Saito.

Saito hasn’t received anywhere near the hype that has followed Kobayashi around for several years now, but the 28-year-old has a strong record. He debuted in 2011 and went 3-1-1 through his first five fights. He’s gone 9-0-1 over his last 10 contests. Yoshifumi Nakamura, whom Saito defeated in back-to-back outings, is his only truly accomplished foe within that stretch. Saito, a Shooto mainstay throughout his career, trains at Paraestra Koiwa. He has stopped one opponent with strikes and two adversaries via submission. The remaining 12 fights on his resume have gone the distance. Saito captured Shooto 145-pound gold from Nakamura in May with a decision win.

Kobayashi tends to victimize his opponents with his fists en route to knockout and TKO victories. His career highlights include a victory over former ONE FC featherweight champion Koji Oishi, a draw against UFC veteran Jorge Patino and decision wins over Marlon Sandro and Will Chope. He did suffer losses to Kazunori Yokota under the Deep banner and Goiti Yamauchi and Justin Lawrence in the Bellator cage. The star prospect has fared much better as a lightweight, and the return to his former division is a wise move to right the ship after his disastrous foray into featherweight competition and a botched U.S. introduction that ended in an 0-2 mark on U.S. shores. Yet, he’s facing Shooto’s lightweight (145-pound) kingpin, so perhaps this is just a breather before he gives the featherweight division another shot.

Saito has a decision-heavy record, so don’t expect him to threaten Kobayashi with a finish. The Shooto champ will have to neutralize his opponent for the duration of this bout. This may have been a reasonable task if the fight was to take place at featherweight, but Kobayashi has been nearly unstoppable at 155 pounds. The Bellator veteran will pressure Saito with a brawling offensive style, and Saito might just crumble under the pressure.