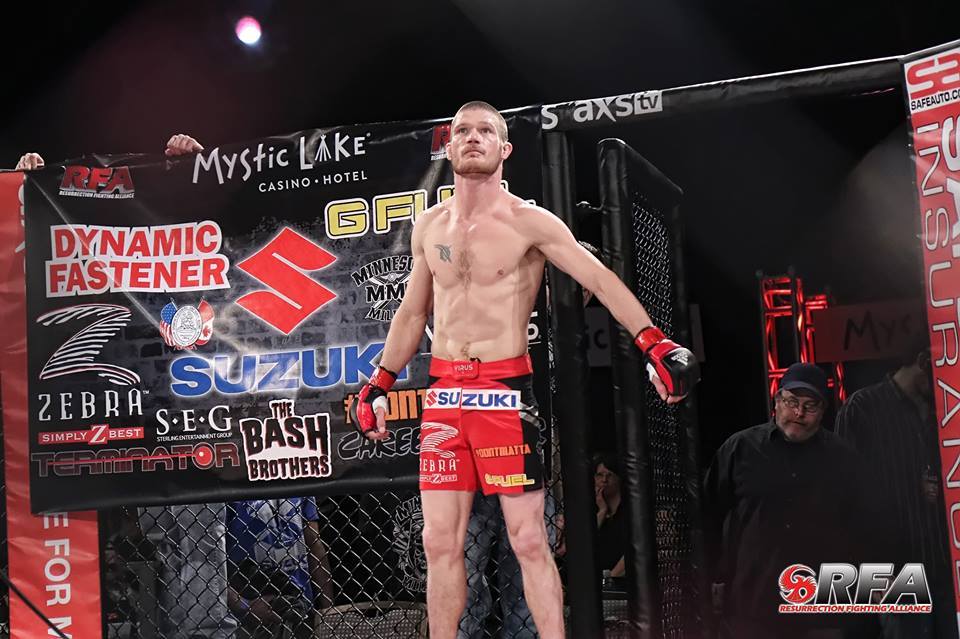 A fighter’s career can be one crazy roller-coaster ride. The highs are extremely rewarding. The lows can take a fighter to a dark place. Marvin Blumer has seen both ends of the spectrum multiple times.

He started his career not just on any four-fight winning streak, but a streak in which he finished all his opponents rather quickly. Unfortunately, Blumer has struggled to string together wins on a constant basis since that early streak was snapped.

Blumer’s record — 11 wins and just five loses — is nothing to be embarrassed about, but it’s the lack of consecutive wins that may be holding Blumer back from achieving his ultimate goal. Since starting his career at 4-0, Blumer’s longest subsequent winning streak stands at three fights, spanning 2013 and early 2014. He has alternated wins and losses multiple times during his career, and his last three fights have included two losses with a victory sandwiched in between.

“Sometimes I let my emotions get the best of me during my fights,” Blumer confessed in an interview with Combat Press. “There are times when I really try to put on my opponent instead of fighting smart. The thing is, I have some losses, but most of them are decision losses and sometimes I make bad decisions during my fights. I’ve learned from all my losses, and I think after all my losses, I’ve came back a better fighter. I just have to make sure I stick to my game plan, figure out where I want to be and do my thing.”

In the skill department, Blumer is confident he can take on anyone at his weight class. It’s another factor that he feels contributes to his inconsistency.

“I love that I have 100 percent finishing ratio, but sometimes I think that sometimes hinders me from winning a decision win,” Blumer explained. “Sometimes I allow people to dictate where the fight ends because I feel I can finish anyone, anywhere, regardless the fight. So I feel that mindset sometimes hinders me when it comes to making adjustments to get the decision victory. Though I will always be looking for the finish, but I need to at least put myself in position where I am winning the point battle as well, if it came to that.”

Blumer is not necessarily young in age, but he is young when it comes to the sport of MMA. He started his pro career at the age of 28, which is considered a late start in the sport relative to the young prodigies we see coming up in the game today.

For Blumer, that is an huge advantage. The things he feels need to get sharpened only come with experience. And that’s not to mention how rigorous this sport can be on the body.

“I do feel like I got a little bit of a late start, but I think martial arts is more about how long you are going to last,” said Blumer. “To have 15 years in MMA, that is considered a very long career. I’ve seen a lot of guys that started at 18 or 19 and by 28 or 29 they are done. I feel like I did start late, but at the same time I feel like my body feels great. I feel like I am in my prime. I have man strength and not little-boy strength at this point. Also, with my mindset now, I have a better idea of what I want in life. So, yeah, I got a late start for considering where I am in life and my career. I feel like it hasn’t affected me that much.”

Blumer also has the benefit of having an identical twin brother, Melvin, who has taken a very similar path. The brothers made their debut on the same card over five years ago and have been on the same card multiple times during their careers. Because of their success, they have been known as “The Bash Brothers” around the Midwestern MMA scene. They will once again fight alongside each other on Friday, when Melvin competes in the main event of Resurrection Fighting Alliance 32 and Marvin appears on the undercard in a fight against Bill Kamery.

“We’ve always been really close,” said Marvin Blumer. “The good thing about having an identical twin is that I always had someone to hangout with. When I was younger, he was always there. I always had someone there to push me, as far as being in shape [and] as far as training day to day. We’ve fought on quite a few cards together, which works great because we almost have the same mindset. We know how to push each other, but we know how to protect each other as well so we don’t get injured. Though our fighting style is somewhat different, we have the same outlook of what MMA should be. That gives us a huge advantage over anyone else. You can try to find somebody to emulate your style, but you’re not going to get closer than me and Melvin.”

We see all the time in this sport: Teammates who fight in the same weight class refuse to fight each other. It is a hotly debated topic and has been for some time now. Some fighters would rather switch weight classes than fight a training partner. Others have even passed up a shot at a major title because they refuse to lock horns with a teammate.

The Blumer brothers could be in that same predicament, but with a major twist. The identical twins could end up fighting each other.

“For the UFC title and to be No. 1 in the world? I think, yes, we would [fight],” said Marvin Blumer. “Obviously, the money would have to be right. I always say there are enough people out there for me to fight, [so] why should I have to fight my brother? But saying that we both set out to be the best in the world, would it ever happen? Who knows, but if the money makes sense and it’s going to change our lives for the rest of our lives then I think we would.

“We both want to be No. 1, and it would definitely be a different camp. I’ve never been through a training camp without training with my brother. It’d definitely be an interesting situation. We’ve had the talk before and it is something we have both considered.”

On a roller-coaster ride, there are many elements. Riders get in the train and get jolted in every direction. They travel up the lift hills and then go diving down the drops, twisting through loops and turns. Marvin Blumer knows how this ride feels. While a fight with his brother could emerge as another sharp turn in the tracks of Marvin’s roller coaster, the bantamweight fighter has to concentrate on what lies directly ahead of him at this moment. He’s coming off a loss. Right now, he’d like nothing more than to start climbing up another lift hill, one that just keeps going up.