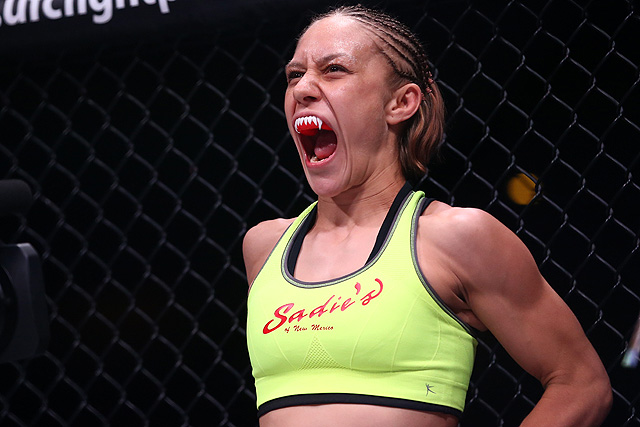 Art very rarely consists of just one color. You don’t hear of black-and-black photography, or just a white canvas. There needs to be contrast. There needs to be definition. And life? Well, life is never just an up or a down. The term “roller coaster” comes to mind when trying to describe life: unexpected turns, drops, climbs and even barrel rolls. This is definitely the life of a professional fighter, too.

Winning is the high. Losing is the low. And the higher the stakes, the stronger the emotion. A title fight? A title fight is the pinnacle of one’s career. And to get the title in the most prestigious women’s organization in your weight class? Well, it’s a dream that only a small percentage of fighters will ever even get to attempt.

Amber “The Bully” Brown has been a professional fighter for almost four years now. With a record of six wins and one loss, she stepped into the cage to face Ayaka Hamasaki, the Invicta FC atomweight champion. She stepped in with high hopes. She walked out with those hopes crushed.

A fighter will train for months for a fight, literally leaving every part of their soul in the gym. They will push past boundaries of exhaustion in order to be strong enough, fast enough and technical enough to beat their opponent. Sometimes they come up short. And what do you do after that?

“I cried,” Brown admitted to Combat Press. “Our daughter trains and competes in grappling tournaments, and we used to tell her, ‘Don’t cry. You can’t win them all.’ But after watching the movie Inside Out, we changed our tune. We told her that crying means that you care and want to do better. You just can’t be hard on yourself. And so, after my loss, she was the first person I saw. And she cried.

“I am not going to stop her from coming to my fights. I don’t make her go, but I won’t stop her. She’s been to all my fights except Japan and the Invicta fight in Iowa [Invicta FC 9, where Brown fought Liz McCarthy]. She is so supportive.”

Since Brown’s daughter trains, she knows what mom is going through. The agony of defeat.

“The loss still breaks my heart,” said Brown. “Ayaka Hamasaki is tough. In the first round, I got a full mount with 10 seconds left. And in the second, I was able to lock in the triangle. I could feel it; if there was more time in that round, I think I had it. She was grabbing for my arm the whole time, so I should have been able to adjust. We drilled a lot for that. But she is a veteran and she was always one step ahead. Every counter I had, she had one ready — or a transition.

“I think if my weight cut had been better — the cut for that fight was bad — maybe the fight would have gone a different way. But Ayaka, man, she is tough. She is strong, and she deserved the win and the title.

“I am glad it was an entertaining fight. After that fight, I felt so much love and support. I was actually surprised at how many people reached out and expressed their support. People want to see a good fight, and we definitely gave them that [laughs].”

Before her title fight at 105 pounds, Brown was considering a potential move to 115. The original plan, however, consisted of defending the title and then moving up to the strawweight division. That part of the plan has been scratched, of course. Now, Brown is going to move up in weight to face Ashley Yoder at 115 pounds on the Invicta FC 20 card, which takes place on Nov. 18.

“There isn’t a whole lot of tape to watch her, just not a lot of video,” Brown said. “I leave that to my coaches anyway, so I wasn’t trying too hard to dig it up. Of course, I saw her fight against Jodie [Esquibel] and the armbar she almost got [against Kate Jackson]. She trains with Dan Henderson, so there is that. She looks like she likes to clinch and wrestle, and she is strong. She is a southpaw and so am I.

“No fight predictions, but I will tell you I am going to go out there and give it my all. I just want to fight my fight. I am sure that her striking will be improved from her striking on [The Ultimate Fighter], but mine will be better than hers. I don’t see as much twitch speed from her. I am going to be faster. I do think this will be a tough fight for both of us, but I do feel that I am better than her in every dimension.

The wins and the losses. The struggles and the joys. They all come together to make a beautiful piece of art which makes each person unique and beautiful. Most of us don’t have to worry about our shortcomings and losses broadcast for all the world to see, so the majority of us will never know what kind of strength is needed to get back out there on the big stage and fight our asses off. But we can be grateful for the warriors who refuse to give up, for the warriors who will put their bodies on the line as they bare their souls for us to see. Their heads may be bloody, but they go unbowed.

Amber would like to thank Damage Control Mouthguards, Trent Cotney, UMA Fight Gear, A Reel Movies, Aardvark Painting, Intestinal Fortitude Design, FIT NHB, Julie Luey at Mei Li Fighting, Tom and Arlene, JJ, her team and coaches, and all those who give her support in any way. Follow Brown on Twitter: @thebully505
Advertisement