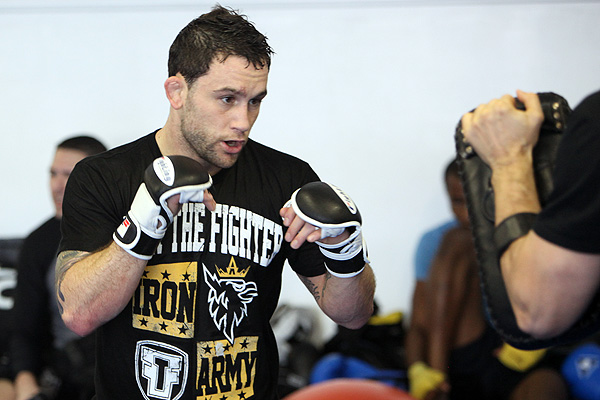 The Back-up Plan: UFC Should Have Fighters Ready Year-Round to Save Pay-Per-View Events

There’s a saying in the fight game that there’s a big difference between being in shape and being in fight-shape. Guys like Frankie Edgar and Chad Mendes appear to be blurring the lines between the two.

Recently, the former UFC lightweight champion Edgar stated that he plans on being ready to step in on short notice should an injury occur to either Conor McGregor or José Aldo prior to their upcoming bout.

“I’m hoping to fight around that time, anyway,” Edgar told Severe MMA’s Andrew McGahon in Bahrain. “Then I don’t have to worry about it. I’ll be in camp anyway if something comes up. I really do think [Aldo and McGregor] are going to fight this time around, but you never know.”

His comments echo the sentiment shared by McGregor’s last opponent, the aforementioned Mendes. The top contender was already in the gym, honing in skills during daily training sessions. By being in the gym on a regular basis, Mendes put himself in position to step into the biggest fight of his life on two weeks’ notice.

It was a lovely stroke of luck for the UFC to have a top contender like Mendes on the back burner. While Mendes may have been working out regularly just to keep his impressive figure, odds are someone with his camp brought up Aldo’s injury history and suggested that he stay ready. The Team Alpha Male fighter’s diligence in training paid off in a big way, as Mendes earned at least $500,000 for stepping in on short notice.

If Edgar continues to stay in the gym and keep himself ready for a fight even without an upcoming opponent, he very well could have the opportunity to cash in as well. With the opportunity for big paydays, will we see other top contenders opt to use these training methods?

I would venture to say yes. The opportunity for a big payday down the line will surely look appealing to fighters who have to scratch and claw for any amount of money. With the ever-present “back-room UFC bonuses” that are rumored to be flying around at every event, one would guess that fighters who step in on short notice are well taken care of by the promotion.

In general, it might not be a bad idea for the UFC to keep a high-level guy on the back burner in case something happens. By keeping high-ranked fighters on standby, the company can avoid terrible pay-per-view headliners like UFC 153’s “main event” between Anderson Silva and Stephan Bonnar. Even if it means throwing a little change the fighter’s way, it would allow pay-per-views that are hit hard by injuries to maintain a strong showing on paper. Perhaps the UFC could set aside additional fighter pay for competitors who are on standby. It’s difficult to say how much money the UFC could provide for this “on-call” status for fighters since the company’s finances are under lock and key in the Zuffa vault, but one would believe it’s certainly feasible to implement this extra pay structure, even if only for the bigger events throughout the year.

The idea seems to be catching on, too. In early 2015, former UFC light heavyweight champion Jon Jones indicated he would be training in the “offseason” and move closer to Greg Jackson’s gym. If world champions are doing this kind of training, odds are other fighters will as well. Fighters often see what champions do in the gym and try to imitate that level of training in their own preparation. The “if the champ trains for six hours a day, then I’m going to train for seven” mentality is common among the machismo-filled confines of a gym.

Even if it’s not a contender, perhaps the UFC could utilize other levels of fighters. It’s not very often that guys like Mendes and Edgar are sitting on the sidelines after all. But there are still a number of guys who may not be relevant in terms of title implications, but who can still draw in eyeballs due to their name value. There are guys like Nate Diaz and Michael Bisping, for example. Or perhaps the UFC could get some use out of fighters who may be on the last leg of their MMA journey but can still gather viewers, like Mauricio “Shogun” Rua and Diego Sanchez.

Now, of course, fighters shouldn’t be putting themselves through year-round camps. The human body simply cannot handle that level of training on a consistent basis. Injuries would become even more common than they are now. Fighters would become burnt out on competing, too. However, by staying in the gym on a regular basis and staying in relatively good shape, fighters would have the opportunity to jump in if an injury occurred. Of course, it wouldn’t hurt that they’d be doing the UFC a favor, something that could be very helpful for a fighter who has dropped a couple fights in a row.

It’s a two-way street that makes a lot of sense for all parties involved. The UFC has a ready-to-go replacement in case an emergency situation pops up, and the individual fighter can still pocket some cash and earn the gratitude of the UFC brass. If pay-per-view buys are still considered a top concern within the organization (and they should be if the company is holding monthly pay-per-view events), this type of strategy should be implemented quickly. Yes, it’d be a shame to lose a handful of cash to keep a guy on the sidelines, but it’s better for the organization to have a backup plan that allows it to make more money down the line.