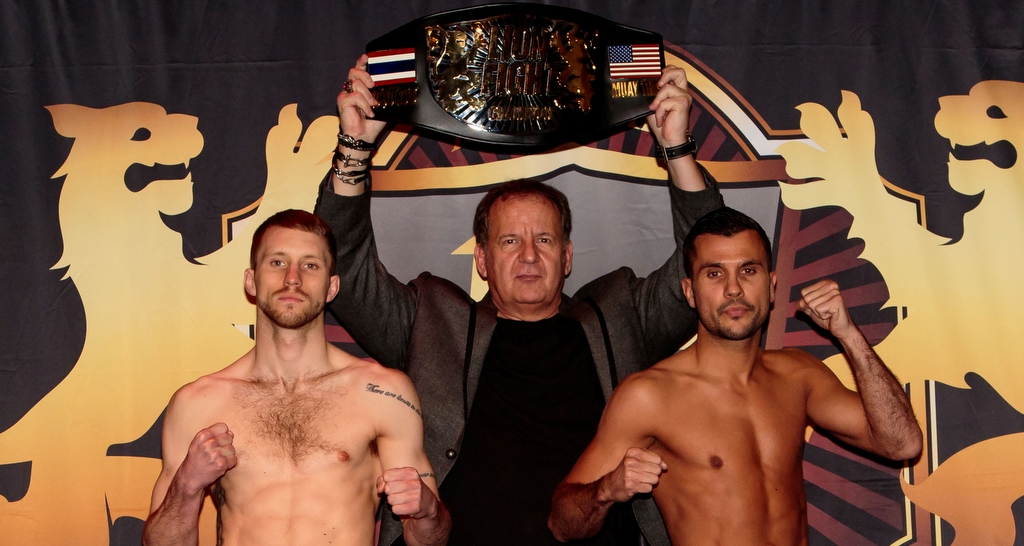 As MMA fans continue to complain of oversaturation and the continual decline of event quality, Lion Fight Promotions continues to power ahead. With its first international foray a success, the sky is the limit for the brand and CEO Scott Kent.

Lion Fight is the premier North American Muay Thai organization. The company has been around for less than a decade, but it has grown exponentially in that timeframe. The promotion just recently took a step toward building the brand internationally with its first event overseas, a co-promoted show with Muay Thai Grand Prix. That event, Lion Fight 39, took place in London, where the promotion’s fighters took home some golden hardware.

The show was such a success, to say the least. Now, Kent and the promotion want to hold three events overseas in 2018. The promotion will return to London and has its eyes on a July card in Paris. But before the company can expand internationally, it heads back to its roots at the Foxwoods Casino in Connecticut with a card that features a trio of title fights.

The headliner for Lion Fight 40, which takes place on Feb. 3, features former MMA competitor and local favorite Chip “The Surgeon” Mozara-Pollard. He’ll put his cruiserweight strap on the line when he fights New Zealand’s Slava “Scarface” Alexichek. This show marks the second Lion Fight card in a row where Mozara-Pollard has served as the headliner, a role that Kent believes was made for the former MMA fighter.

“We’re finding guys who may not have had a great jiu-jitsu or wrestling background, but MMA was the only game in town,” Kent told Combat Press. “He works with Mark DellaGrotte, and he’s able to focus just on his stand-up. He’s comfortable with striking and he’s very good at it. ‘The Surgeon’ vs. ‘Scarface’ — you couldn’t write it any better than that.”

The evening’s co-headliner has enough sizzle to make Guy Fieri do a double take. Thai sensation “Mr. Lightning” Lerdsila faces Alexi “Phet” Serepisos for the lightweight title. Lerdsila had an impressive showing in his Lion Fight debut, making the rounds across social media with a lightning-fast knockout:

Despite the flashy showing in his promotional debut and an impressive resume that includes nearly 200 professional bouts, including a 100-fight winning streak, Serepisos is undeterred heading into the biggest fight of his life.

“Alexei is one of those guys that’s going to come to fight,” Kent said. “He’s going to try and get in there and mix it up with Lerdsila. From everything that I’ve heard about our friend from New Zealand, he comes to fight and he’s tough as nails. He didn’t have any hesitation when offered this fight. That co-main event is going to be a great match-up.”

The ability to create stars is a key to becoming not only a big promotion in North America but throughout the world. Lion Fight is set to team up with a new broadcast partner. Kent stated that the promotion is looking for ways to increase its production in order to better tell the fighters’ stories. Despite being slotted in the co-main event, Lerdsila has the makings of a focal point for the promotion as it expands in North America and the world.

“Lerdsila is a rock star,” Kent said. “He’s one of those Thai fighters that has a classic Thai style, but has a showman aspect to it. He’s a lot like Saenchai. Because of his style, Lerdsila is going to appeal to an American audience. He’s already a rock star outside of here, so our job is to make him a rock star here.”

Not looking to put all their eggs in one basket, Kent was quick to praise a handful of fighters on the promotion’s roster who he believes could be stars moving forward. Muay Thai fans will be able to watch some of these fighters when they compete on the Lion Fight 40 card.

“There are a lot of guys on this card that are both charismatic and good fighters,” said a boastful Kent. “Guys like Chip Pollard, Steve Walker, Brett Hlavacek, Cris Mims, Julio Pena — I think they all have potential to become the next big thing in the U.S.”

At Lion Fight 40, the promotion plans to introduce a new title to help build stars within the United States. Hlavacek takes on Elijah “The Mayor” Clarke for the aptly named North American light heavyweight title. This sets it apart from the company’s world titles.

“It allows us to focus on another level of champions separated from our world champions,” explained Kent. “But we’re going to do rankings and lot of things moving forward for this. We’re going to give these up-and-coming fighters a chance to compete for one of our belts.”

This set of belts available to North American fighters only gives the promotion a chance to build up homegrown talent in a key market. It also opens the door for possible champion-vs.-champion fights down the road, which is something that’s becoming increasingly more popular in the world of combat sports. Regardless of how the promotion handles these up-and-coming champions, the key will always come back to the promotion’s ability to market these athletes to a wide array of audiences.

Each Lion Fight event features a bevy of highlight-reel knockouts and exciting stand-up action. With the promotion looking to ramp up its production outside of events, fans can rest assured that they’ll be fed a healthy dose of story and intrigue about the organization’s athletes.

“These guys have incredible stories about the sacrifices they’ve made to get here,” Kent said. “Muay Thai isn’t a sport for the timid. You don’t do Muay Thai halfway. It’s a very destructive and violent sport. It takes a special type of male or female to do it.”

With a storied past to draw on, Lion Fight has the makings of something truly special in the world of Muay Thai. Of course, everyone knows the sport is the lifeblood of the culture in Thailand, but the martial art extends well beyond the Thai borders. As the promotion enters its eighth year, Kent was teeming with excitement about where the brand is going.

“You have guys like UFC Hall of Famer Pat Miletich saying he’d rather watch a Lion Fight than MMA,” said Kent. “I think that goes a long way. I was fortunate enough to get lunch with [UFC President] Dana White before, and he said we’re light years ahead of where they were at this time. We feel really good about where we’re at. We think we’re at the right place at the right time.”

There’s no better recipe for success than having the right product at the right time. With the combat-sports world feeling a bit jaded from both MMA and boxing, Lion Fight aims to offer an alternative to the same old offerings. The promotion’s next event features some talented fighters, and with titles on the line, the stakes couldn’t be higher for the competitors on fight night. Who will sink or swim when the bright lights of primetime turn on?