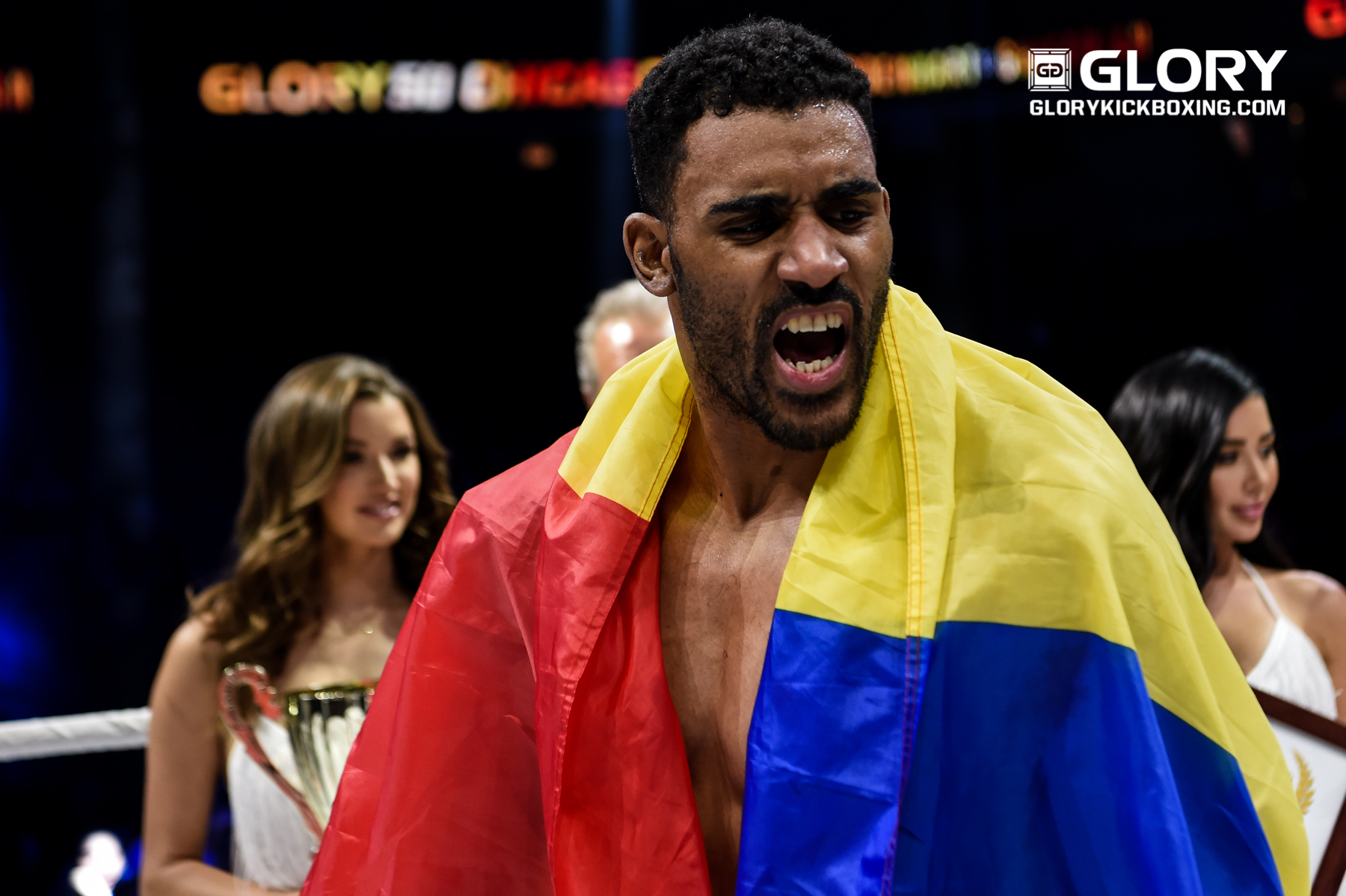 GLORY 50’s Benjamin Adegbuyi: You Can Call Me ‘Mr. Tournament’

Following yet another contender tournament victory at GLORY 50 in Chicago, “Mr. Gentleman” Benjamin Adegbuyi earned himself another piece of hardware and possibly, a new nickname.

As the field of heavyweights descended upon the Windy City, many kickboxing fans and analysts pegged Adegbuyi as the clear-cut favorite to take home the Ramon Dekkers trophy. The hulking Romanian appeared well on his way to validating those claims as he dispatched D’Angelo Marshall with a thunderous knockout in just 36 seconds. After Brazilian Guto Inocente was deemed unfit to continue due to a cut after beating Junior Tafa, Adegbuyi captured a third contender tournament victory by chopping down the Mark Hunt protege.

“They have to know when they put me in a tournament, I’m going to win,” Adegbuyi said with a smile to media members backstage after GLORY 50. “You can call me ‘Mr Tournament’ instead of ‘Mr Gentleman.'”

Adegbuyi is certainly no stranger to tournaments. He won the SUPERKOMBAT World Grand Prix III 2012 tournament title and previously won two different GLORY heavyweight title contender tournaments in 2015 and 2016. Both of his previous GLORY tournament wins set him up to clash with the “King of Kickboxing” Rico Verhoeven. The two have trained together in the past but now a third showdown in the ring is inevitable given the elite status of the two heavyweights. Adegbuyi made it clear to Whitney Miller in her post-fight interview and to the sea of media backstage that he’s coming for the belt.

“Badr [Hari] or Rico, it doesn’t matter to me. I’m a professional,” Adegbuyi said.

While Adegbuyi mentioned he plans to take the next few weeks off to spend with his family, it’s unclear what direction GLORY will go with its heavyweight title. Hari has a showdown with Hesdy Gerges at GLORY 51 and if Hari emerges victorious, it wouldn’t be shocking to see the promotion try and run it back with Hari and Verhoeven. The fight between the two heavyweights was arguably GLORY’s biggest blockbuster fight and considering the somewhat anti-climatic finish to their first fight, kickboxing fans will undoubtedly look for some clarity in a rematch.

But where would that leave Adegbuyi? As a contender tournament winner, one would have to believe he and his management team won’t settle for anything less than a title shot or perhaps his own battle with Hari. If neither of those options present themselves, the No. 1 contender has another idea up his sleeve.

“I had my boxing debut in November, so maybe I’ll do another fight in the next few months,” Adegbuyi said.

Perhaps we and “Mr. Gentleman” will get some more direction from GLORY following GLORY 51.