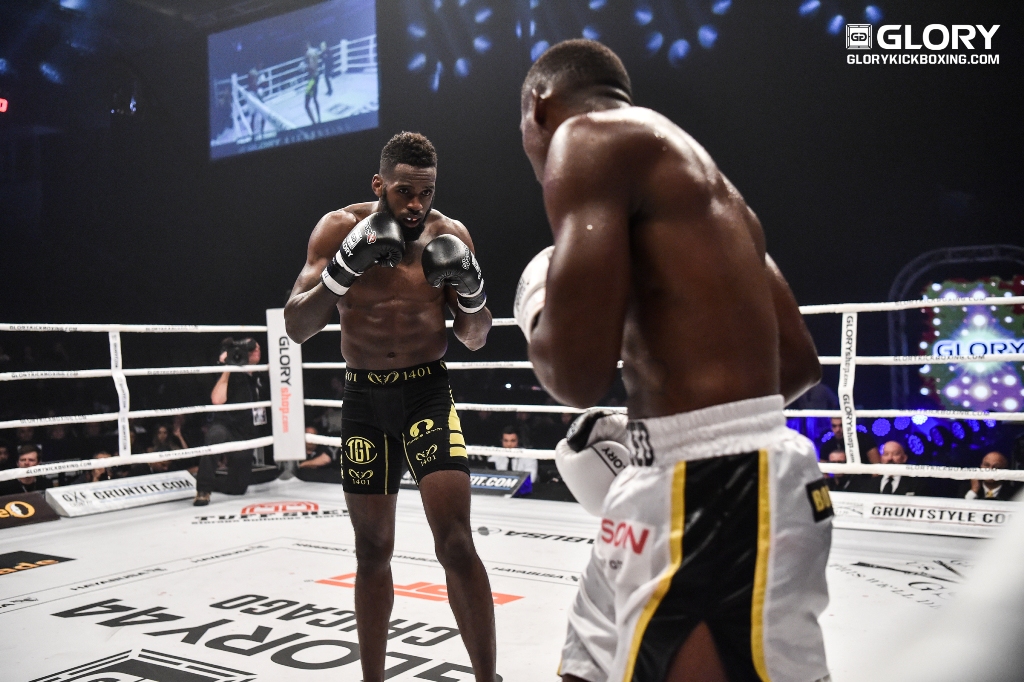 On Friday, Feb. 16, GLORY Kickboxing returns to the Windy City for its 50th event. The show takes place at the UIC Pavilion located on the University of Illinois at Chicago campus.

In the night’s main event, welterweight champion Murthel Groenhart makes the first defense of his title against a familiar foe, Harut Grigorian. The pair have met twice previously, with Groenhart scoring second-round knockouts in both contests. Both fighters picked up wins at GLORY 44 — also in Chicago — to set up the title contest.

In addition to the headliner, the promotion will host a one-night, four-man heavyweight tournament. Former title challenger Benjamin Adegbuyi takes on D’Angelo Marshall in one side of the ladder, while Brazilian Guto Inocente meets Junior Tafa in the other half of the bracket.

The night’s SuperFight Series card is headlined by a lightweight title tilt featuring the sport’s No. 1-ranked pound-for-pound fighter, Sitthichai Sitsongpeenong, who defends his belt against tournament winner Christian Baya.

Murthel Groenhart finally captured GLORY gold in his third attempt at the belt. His first title defense comes against Harut Grigorian, a man he has defeated twice previously. Will history repeat itself in Chicago? Or will Grigorian end Groenhart’s reign as quickly as it began?

It depends on what’s meant by “will history repeat itself.”

What happened at GLORY 42 in Paris last June was one of those moments in combat sports where you’re not sure if it is real as you’re watching it. I vividly remember shouting, “What the fuck was that?” at my TV as it transpired. From the moment that Grigorian started walking away from Groenhart along the ropes, it was pretty clear that he was out on his feet. However, the referee didn’t figure it out in time and Groenhart absolutely crushed him with a right hand. If that wasn’t chaotic enough, a handful of fans stormed the ring and started punching Groenhart in the corner. The melee was one of the strangest things to happen in combat sports in quite some time — at least no one lost an ear, right? — so no, I don’t expect that portion of history to repeat itself.

As for the fight, that’s another story. Groenhart could not unseat then-champion Nieky Holzken in two attempts at GLORY gold, despite putting together some of the best performances of his career. After Cédric Doumbé took the belt from Holzken last year, it opened the door for Groenhart to earn his place atop the weight class by defeating the Frenchman. Now, in his first defense, he meets a fighter that he’s knocked out twice already. One of Groenhart’s biggest criticisms in the past was whether he was motivated entering the ring, and a third fight with Grigorian could certainly be a trap fight for the champion given his prior success against the challenger.

Grigorian isn’t the type of fighter to point fight, and his aggression is an effective weapon against the majority of the world’s welterweights. But when his level of competition gets more difficult, he tends to struggle, as evidenced by the two losses to Groenhart. Even more concerning for the Armenian-Belgian fighter is that of his three career knockout defeats, two were against the champion. That’s not exactly a recipe for success in this title affair.

Groenhart has looked like a much more focused fighter over the last few years, and he’s beaten many of the sport’s best. Grigorian will make this an exciting fight while it lasts, but yes, this part of history will repeat itself, as Groenhart knocks out the challenger for a third time to retain his belt.

The world’s best kickboxer, Sitthichai Sitsongpeenong, is set to make the third defense of his lightweight belt against Angola’s Christian Baya. This year has already featured a number of upsets outside the GLORY ring, but can Baya shock the world in Chicago? If not, what does the future hold for the Thai fighter?

Baya has been a welcomed addition to the GLORY lightweight ranks. From stunning Canadian Josh Jauncey on less than a week’s notice in his promotional debut, to capturing the GLORY 42 contender tournament, he’s quickly established himself as one of the world’s elite. He punctuated those victories with a stoppage win over Samo Petje at GLORY 49 in December to cement himself as the No. 1 contender.

There’s not a whole lot that I can say about Sitthichai that either myself or my colleague, Zach Aittama, haven’t already said over the last few years. The Thai champion is the most complete fighter in the sport right now, and he improves in every outing. From his lethal kicking arsenal to his ever-improving boxing, he has simply dominated the lightweight division for the majority of the last five years. Since capturing the GLORY belt from Robin van Roosmalen, he’s defended it against Marat Grigorian and Dylan Salvador.

This fight is intriguing simply because Baya is a fresh face to challenge the champ. All of the previously mentioned title challengers were fighters that Sitthichai had battled in the past. Baya will have a height and reach advantage in this fight, but it’s not the first time Sitthichai has faced a larger opponent. He holds a knockout victory over GLORY welterweight champion and GLORY 50 headliner Murthel Groenhart. Expect Baya to find some early success with his hands, but once Sitthichai calculates his range and timing, this fight will sway heavily toward the champion. He’ll retain his title with a lopsided decision win.

As for what the future holds should Sitthichai get past Baya, there’s certainly a preferred option: Marat Grigorian. Even though Sitthichai has beaten Grigorian three times already, Grigorian has pushed the champion unlike anyone else in the GLORY ring. Couple that with the fact that Grigorian just captured the 2017 Kunlun Fight tournament by decimating the No. 2-ranked lightweight in the world, Superbon Banchamek, and it’s not a hard sale. Grigorian will take on Stoyan Koprivlenski at GLORY 52 in Los Angeles next month, and should he come out victorious, a fourth fight with Sitthichai is the right choice for GLORY.

With heavyweight champion Rico Verhoeven out of challengers, four fighters will look to state their case for a crack at the titleholder. Which fighter leaves Chicago with the tournament crown and how does he do it?

This is the best lineup for a heavyweight tournament inside the GLORY ring in quite some time. There are two-time title challenger Benjamin Adegbuyi, red-hot Curaçaoan-Dutch fighter D’Angelo Marshall, UFC veteran Guto Inocente and Aussie slugger Junior Tafa all vying for top honors.

Adegbuyi is anxious to earn a third crack at Verhoeven, whom, ironically, he’s trained with in recent years. The Romanian will also have revenge on his mind in this tournament, after he was flat-out robbed against Inocente at GLORY 43 in New York.

Marshall enters the tournament with a wave of momentum. He’s defeated Mohamed Abdallah, Ismael Londt and former title challenger Anderson “Braddock” Silva in his last three GLORY appearances. Like his semifinal opponent Adegbuyi, Marshall will have his eyes set on a rematch with Inocente, who edged him in an extension round at GLORY 37.

As alluded to above, Inocente will have a target on his back should he make the finals. The flashy Brazilian has his fair share of highlight-reel knockouts, but he’s also proven that he can hang with many of the division’s best. The question mark is his gas tank. He faded badly against Marshall, despite taking the victory in the extra round. Can he hold up over a potential six rounds in one night?

The Australian Tafa is the wild card in this foursome. “The Juggernaut” has tasted defeat just once in his kickboxing career and scored a one-sided beatdown of Quanchao Luo in his GLORY debut in October. If the power-punching protégé of Mark Hunt can get past Inocente, he can really make a name for himself by defeating Adegbuyi or Marshall in the final.

So who wins? The edge has to go to Adegbuyi, who has faced the toughest competition for the longest time. He’ll capitalize on an over-aggressive Marshall in the semifinals before exacting revenge on Inocente in the finals with a nasty right hand.