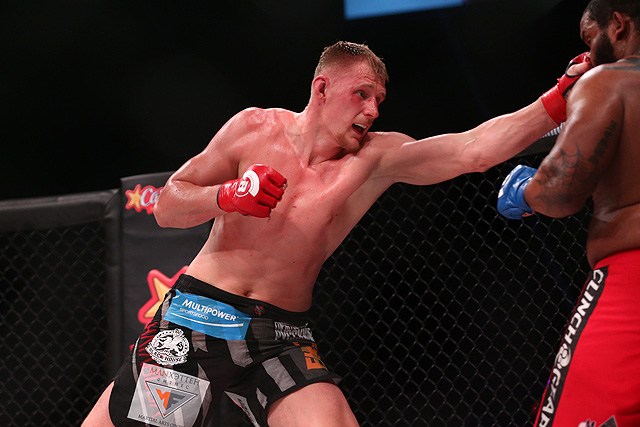 The UFC’s trip to London for the 127th edition of UFC Fight Night resulted in a new contender within the heavyweight division. Alexander Volkov destroyed former UFC champ Fabricio Werdum. The finish came via strikes in the fourth round, and it sends Volkov to the short list of potential future title challengers within the heavyweight division. The Russian has been perfect through four UFC outings.

Meanwhile, Werdum looks like he’s definitely on the wrong side of 40 now. The Brazilian had flashed improved striking on his rise through the UFC ranks, but he was completely outgunned by Volkov and resorted to his Brazilian Jiu-Jitsu base in a fruitless effort to take the fight to the mat. The heavyweight division is full of older fighters, so it’s difficult to say if Werdum’s headed for a steep fall or if he can turn things around once more.

Jan Błachowicz is hardly a consistent fighter, but his unanimous-decision victory over Jimi Manuwa will undoubtedly raise his status in the light heavyweight rankings. The Polish fighter avenged a previous loss to Manuwa, but this is the same guy who has failed to get past the likes of fellow fringe players in the division, including Corey Anderson and Patrick Cummins.

When are we going to see the Tom Duquesnoy that ruled over Britain’s BAMMA organization? First, he looked hesitant in his Octagon debut against Patrick Williams. Then, he stumbled against Cody Stamann. In London, Duquesnoy did pick up a decision over Terrion Ware, but it was hardly a one-sided affair and could just as easily have gone in favor of the American.

Leon Edwards is quietly making his way up the welterweight ladder. His ground-and-pound finish of Peter Sobotta extended his winning streak to five fights, but the bigger stat is his overall UFC record, which now stands at 7-2. Edwards has only suffered a split-decision loss to Claudio Silva early in his UFC tenure — and in Silva’s native Brazil, no less — and a unanimous-decision defeat against rising star Kamaru Usman.

Perhaps the nickname “The White Mike Tyson” is just an invitation to test that fighter’s ground game. Charles Byrd did so against John Phillips, the owner of that moniker, and emerged with a first-round submission finish.

The evening’s opener between heavyweights Mark Godbeer and Dmitry Sosnovskiy really shows the lack of depth in the heavyweight division. These fighters looked sloppy when working on the ground, and neither demonstrated that they’ll be a future threat to the upper levels of the division.

Jake Heffernan turned heads in the Paramount MMA headliner this weekend. He may not have maintained a perfect record as an amateur, but Heffernan is rolling through opponents as a professional. At the Paramount MMA: Contenders show, he submitted Derek Brenon, a featherweight who has made appearances for the Legacy Fighting Alliance and Cage Fury Fighting Championships organizations. It might not be long before Heffernan gets his own shot in the mid-major promotional level.

Canada’s 20-year-old stud prospect T.J. Laramie was successful in his latest title defense at TKO 42. The young star dropped veteran João Luis Nogueira in the fifth round of their featherweight clash.

Dehby will get another change at gold when she faces her fellow French foe, the No.1 pound-for-pound Anissa Meksen, at GLORY 53 in Lille, France. However, the odds will be stacked against her.

On Saturday night, legendary promoters Bob Arum and Don King sat opposite of each other one more time. In what could be the final time the two do so, Arum got the better of King, with Jose Carlos Ramirez defeating Amir Imam to become the new WBC junior welterweight champion.

Imam, with King as his promoter, started off the fight well, working the jab and his movement to keep Ramirez on the outside. Ramirez eventually started to take over in the mid-to-championship rounds, landing more frequently and rocking Imam at one point. Once the 12th round ended, it was clear who had won. Ramirez took the scorecards 117-111, 115-113, and 120-108. The 120-108 scorecard was atrocious, as Imam was competitive and took several of the early rounds.

For Ramirez, a showdown with Regis Prograis should be next. However, Arum has said he would like the two to be on the same card first before facing off. Hopefully that doesn’t happen, though. Prograis is deserving of being in the ring next with Ramirez, and that’s the fight that needs to happen sooner rather than later.

What would St. Patrick’s Day be without an Irishman headlining a major show? On the same card where Ramirez was victorious over Imam, former Olympic bronze medalist and super prospect Michael Conlan ended the show. Conlan landed a vicious body shot over his opponent, David Berna, in the first round. Berna was able to answer the 10-count, but the damage had already been done. Berna was stopped quickly in the second round. The win marked Conlan’s sixth professional victory since he turned pro, coincidentally, on St. Patrick’s Day of 2017. The sea of Irish fans at the MSG Theater in New York left happy and inebriated.