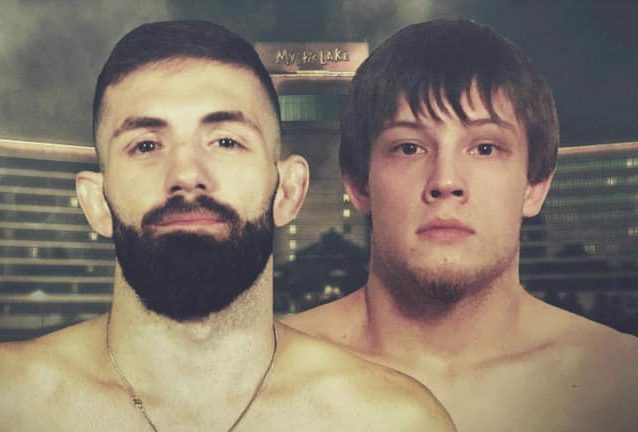 No gym? No coaches? No problem!

Not every MMA camp needs to be an elaborate facility with tons of fancy equipment, locker rooms, heart-rate monitors, and a business office. In fact, when the cage door closes for an actual fight, it’s three people, minimal clothing and two pairs of gloves. That’s it.

When Kentucky’s own Ken Beverly was growing up, he just wanted to fight. He didn’t care where he trained.

“I’ve always loved fighting since I was younger,” Beverly told Combat Press. “My fifth grade year, I was getting bullied by a couple boys in my school. I took a really bad whoopin’ one day from this kid, and the next day, I came back and I whooped him.”

Beverly grew up in a close family, with his mom, dad and two younger siblings. Like a lot of young boys, he was very entertained by good ol’ rassling.

“My brother and I used to like pro wrestling, but then I found out it was fake,” Beverly said. “Then, I saw MMA one time, so I asked my dad if it was fake, and he said that everything there is real. I told him that’s what I wanted to do.

“When I was 11 years old, I started. My brother was 10. That was 10 years ago, and I’m 21 now. We’ve been through thick and thin, gym to gym, and basement gyms all around here. It’s a little challenging down here. It’s nothing special. We don’t have a lot of money or anything like that. I’m just a poor kid trying to make it. That’s kind of what got me into this. I love this sport. It’s like my life.”

Beverly doesn’t have much in the way of coaches, but he does get some cross-training in at other gyms that do. Olive Hill, Ky., where he trains, only has a population of about 1,600 people. They look stuff up on the internet and train all of the major fighting modalities. The results aren’t half bad. Ken is 8-3 as a pro, and his brother, Stone, is a 19-year-old amateur with a winning record as well.

Beverly wrestled for about two and a half years in junior high and high school, but most of his time has been spent training in MMA. Since there wasn’t really a gym in town, they created one of their own.

“The guy that owns it is the landlord,” Beverly explained. “We just rent it. Everyone that comes to the gym to train pays $50 per month. Even I pay, and I try to run the gym as much as I can, because I’m there every day. Me and my brother are there every day. Even after fights, we’re there every day. It’s a double-wide trailer with a couple bathrooms, and it’s not big at all.”

Beverly’s career has largely taken place in the Kentucky and Ohio region. His three losses have been sandwiched between multi-fight winning streaks. His current three-fight streak happened between March and October 2018, and it culminated with a Hardrock MMA featherweight title win.

“I’ll be honest with you,” Beverly said. “It doesn’t matter where you come from. I’ve had people tell me my whole life, ‘You’re never going to be as good as you are. You’re never going to do this. You’re never going to do that. You need better people to train with.’ I’ve got good training partners. You’ve never seen us. You’ve never seen us work. When I get in there, I’m confident. I’m confident in my game and myself. I work my hind end off every day. The guy my brother beat the other day brought a belt down here. He was 5-1, and my brother was 6-4. He finished him in the second round with a belly-down armbar. We knew that boy was a high-level wrestler, but we knew what my brother was capable of, and our whole team knows. We work our heinies off.”

Beverly has so much passion for MMA. It is truly admirable. He has an amazing work ethic, too. This has earned him a spot on the main card with the Legacy Fighting Alliance on Friday night. He’s set to face LFA veteran Nate Jennerman in a bout that airs live on AXS TV.

“My manager, Jason Ellis, is the one who got it for me,” Beverly said. “He was trying to get me a fight at Island Fights, but the guy didn’t want to fight me. So, he told me not to worry, that we would get something for LFA. When I heard the news, I was so happy. I know I’m young and I’m a kid, but I’m hungry.”

LFA 61 takes place at the Mystic Lake Casino in Prior Lake, Minn., one of the promotion’s regular venues. Jennerman hails from Wisconsin and could have the crowd on his side. The 26-year-old brings a 12-4 record to the cage, and his resume includes LFA victories over Damion Hill, Sam Toomer, John DeVall and Kevin Croom. However, Jennerman is coming off a loss to Damon Jackson in a featherweight title scrap at LFA 47.

“I’ve watched a lot of his fights, and I know he trains at Duke Roufus,” Beverly said. “He’s a really good jiu-jitsu guy. I don’t take nothing away from his game. I just feel like I’ve fought a bunch of guys like that. I have. I know what I can do. This guy’s a really good fighter, and I think really highly of him. This is my chance.”

According to Tapology, Beverly is currently the seventh-ranked featherweight out of the U.S. Southeast. Fighters out of Kentucky do not get into the limelight much, but he is prepared to show the world why they are a force to be reckoned with in the world of MMA.

“I think I’m prepared for LFA,” said the featherweight. “Hardrock MMA is an up-and-coming promotion. There is so much talent coming out of Kentucky, and no one really realizes it. You’ve got to watch the Kentucky fighters. They come out and kill. I don’t know if it’s the country blood or what.”

Blood is what Beverly will be focused on when he enters the LFA cage with Jennerman. He is not a boring fighter, and while he does have some decisions under his belt, his wins have been exciting and dominant.

“It’s my heart and my pressure — I just try to take everyone out of their element,” said Beverly. “When you’re most comfortable and you think you’re going to do something, I’m punishing you the whole time.”

Whether he’s training out of a basement, a double-wide, or a backyard, Beverly has proven that none of that matters when he steps into the ring. On Friday night, he will be prepared to introduce the world to a young and hungry Kentucky fighter looking to make a name for himself.