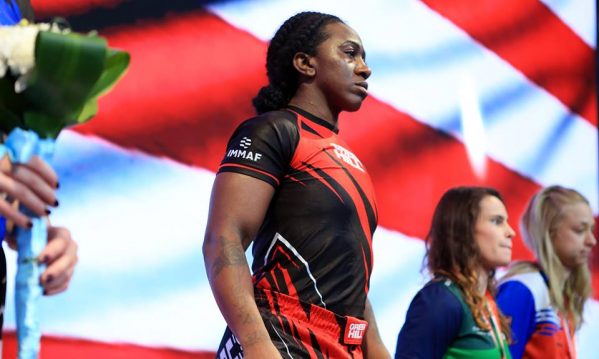 Editor’s Note: This article originally appeared on IMMAF.org and has been reprinted here with permission.

In the time it has taken to generate the opening lines of this article, LaNeisha “She-Hulk” Vinson of the United States became a world champion. It took just 49 seconds for Vinson to cement her place in MMA history, just three years into her career.

In a tournament that grows bigger annually, both in terms of number of competitors and in level of skill, the native of South Carolina didn’t just represent her country, but her country’s last hope. After just two days of competition, she was the last remaining U.S. representative, competing in the senior women’s bantamweight division of the week-long championships event.

Since the inaugural IMMAF World Championships in 2014, the United States has never failed to win a gold medal.

Vinson was asked during a UMMAF Q&A on Facebook, ahead of the finals, “How do you feel being the last [wo]man standing?”

She replied, “It feels good, but all of my fellow teammates did a tremendous job this week and still are helping myself and anyone who needs help. Surprisingly, they have pretty good coaching skills as well. Over this time, I’ve grown to appreciate them, and we became more like family this week. Hopefully we all keep in touch.”

As if her own desire to win gold wasn’t enough — “She-Hulk” took a year off to solely focus on preparing for the world championships, according to UMMAF head coach Robert Hulett — she is also a mother of two.

“I have two beautiful daughters who keep me going to better myself and life for them. I have a husband whom is my high school sweetheart.”

It might be back to business as usual as Vinson looks for her next fight. However, with her dominant finish of Romania’s Daniela Mihaela Bulgaru in the finals on Nov. 17, Vinson became USA’s first IMMAF-WMMAA unified world champion in any weight class, the USA’s first female world champion in any weight class (including prior to the IMMAF-WMMAA merger), and claimed the record for most KO/TKO wins (4) by a gold medalist in the world championships.

UMMAF’s Southeast Regional Director Justin Brown, also of South Carolina, commented, “Words can’t describe the feeling I have knowing the small rural state of South Carolina has continued to excel on the largest and toughest global MMA stage, backed by the UFC!

“What state is going to be the next dominant force to represent the USA on the largest international stage? Step one is to compete at the UMMAF amateur national championship tournament. That will secure your spot on the U.S. national team for 2019.”

In addition, the World Trials/National Championship to determine the U.S. youth national team (ages 12-17) will take place June 19-20, 2019, in Ontario, Calif. Winners will be eligible for the first-ever IMMAF-WMMAA Cadet World Championships to be held Aug. 3-4, 2019, in Rome, Italy.

The USFL is currently raising money to cover travel expenses for cadet competitors selected to represent the nation on the global platform. The fundraiser page is located on the GoFundMe website.