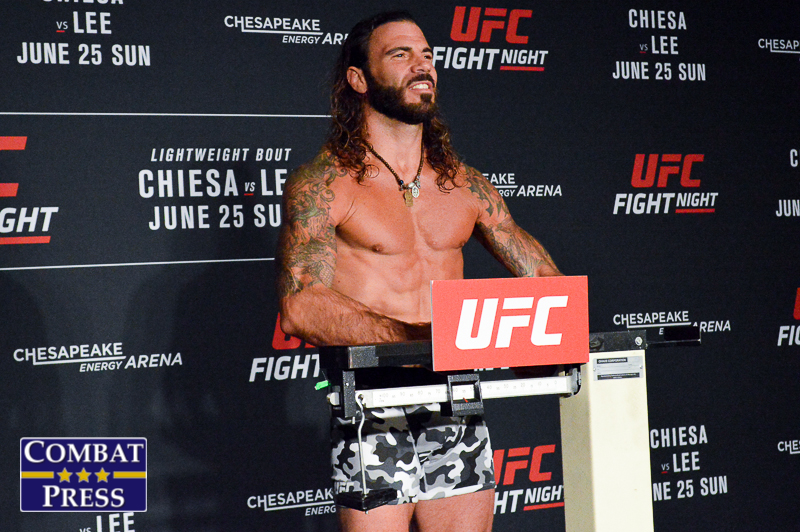 Blast From the Past: UFC Fight Night 120 Will Be a Reminder of the Good Ol’ Days

For the longtime MMA fans out there who have been watching the UFC for a decade or more, this one’s for you. You’re going to be in for a special treat on Saturday night, when the majority of the main card at UFC Fight Night 120 from Norfolk, Va., focuses on bouts between fighters that have definitely been around the block more than a few times.

To kick off the main card, former The Ultimate Fighter 5 contestant and Massachusetts native Joe Lauzon takes on Clay “The Carpenter” Guida, who is one of the hardest working and most relentless fighters on the UFC roster. Both guys have been a fixture in the organization for so long, and they have had about the same amount of success. Neither man has ever fought for a UFC title, but they have definitely remained fan-favorites for so many years.

With a UFC record of 13 wins and 10 losses, Lauzon remains above the .500 mark, but he hasn’t been very consistent, splitting his last eight fights. The one bright spot for Lauzon is his accrual of an incredible 15 performance bonuses. He has always delivered when putting on exciting fights, and that’s what fans expect.

Lauzon’s opponent, Guida, is better known as the classic grinding wrestler who will never give up in getting the takedown and laying some ground-and-pound on his opponent. This should be even more the case now, since he started training at Team Alpha Male in Sacramento, Calif. One of the best fights Guida was ever a part of came against another longtime UFC fighter, Diego Sanchez, who’s also fighting on the same card this weekend. Guida and Sanchez probably had one of the craziest back-and-forth bouts. In June 2009, they put everything on the line, trying to finish each other at almost every minute. Eventually, Sanchez won the fight, but both guys made tons of fans that night. Of course, Guida is not the same kind of fighter these days, but he and Lauzon do have the potential to put on a competitive performance.

Lauzon, more than anybody, deserves for something good to happen here. He’s such a phenomenal fighter, and he’s put on some amazing fights. Unfortunately, other than some hefty bonuses from the UFC, he hasn’t gotten much else, let alone a UFC title fight. Lauzon has always come up short, and even though he would have to do a lot to get there, he can pull it off. At the age of 33, he’s still young. He has so much heart, too. There’s no telling what’s holding him back.

Nate Marquardt is another of the veteran fighters competing in Norfolk this weekend. This is a guy, if you can believe it, who actually fought for the UFC middleweight title against Anderson Silva all the way back in 2007. That was the champion’s first of 10 official title defenses. Five years later, Marquardt finally won a championship, albeit at welterweight, but it was with the now-defunct Strikeforce organization. After losing the title in Strikeforce six months later, Marquardt came back to the UFC, where he lost seven of his next 10 fights, including a loss to Vitor Belfort in his latest fight in June. So, while Marquardt hasn’t been on a great run lately and hasn’t gotten anywhere close to a title shot in years, he is still a very formidable opponent. It’s unclear whether he has much of a chance to rise through the ranks from here on out, but his opponent, Cezar “Mutante” Ferreira, isn’t exactly the toughest challenge on the UFC roster. Ferreira has won three of his last four fights, whereas Marquardt has lost three of his last four outings.

UFC Fight Night 120 also features former UFC heavyweight champion Andrei Arlovski, who got the strap all the way back in 2005 by first winning the interim title and then getting promoted to the rank of undisputed champ. Ever since then, the Belarusian has won some and lost some in the UFC and has gone on to fight for organizations like EliteXC, Affliction, Strikeforce, ProElite, ONE FC and the World Series of Fighting. Regardless of where he’s fought, Arlovski has taken on some really tough fighters and, again, won some and lost some. He had one rough patch between 2008 and 2011, when he lost four fights in a row. However, the defeats did not come against easy competition. He was knocked out by Fedor Emelianenko, Brett Rogers and Sergei Kharitonov, and lost in a decision to Antonio “Bigfoot” Silva.

After making his return to the UFC in 2014, Arlovski turned things around. He went on a four-fight winning streak, spanning 15 months between 2014 and 2015. However, the Belarusian has since gone on yet another skid. This one has been his worst, where he’s lost five fights in a row. Again, though, he hasn’t fought easy competition. His opponents included current heavyweight champ Stipe Miocic, as well as Alistair Overeem, Josh Barnett and Francis Ngannou. All four fights ended in a knockout finish.

Arlovski’s last fight came against Marcin Tybura. This seemed like a fight the former UFC champ could win, mainly because of his vast experience and Tybura’s lack of UFC experience. Yet, Arlovski came up short, losing in a unanimous decision at the Singapore event.

Arlovski’s fight at the event in Norfolk won’t be easy, either. He takes on hard-hitting Brazilian Junior Albini, who just recently knocked out one of the toughest guys in the division when he finished Timothy Johnson in less than a round at a July event. That’s no easy task, seeing as how Johnson had never been knocked out in his career up to that point. Consequently, if Arlovski ends up losing, this might end up be the end of the road for the former UFC titleholder, whether that means retirement or simply a UFC release.

The final fight pitting two old-school veterans will be the aforementioned Diego Sanchez outing. Sanchez is slated to meet former The Ultimate Fighter 7 competitor Matt Brown. Both guys are considered to be among the toughest guys in the welterweight division. Sanchez, who came out of the very first season of The Ultimate Fighter, has always been more well known for his fighting style, not so much where he was earlier in his career. He’s had plenty of bright, shining moments, including the fight with Guida, which was one of the very best slugfests in the company’s history.

Brown is just a classic, tough, grind-it-out guy. He never gives up. He never stops moving forward. He almost never has a pleasant look on his face, and you know he definitely means business. Coupled with the mean faces Sanchez can put on, this might be a contest for who has the scariest mean mug. Hopefully, for the fans’ sake, the fight turns out to be as scary and ridiculous as we expect.

Over his last 10 fights, Sanchez, who goes by the moniker “The Nightmare,” has been just below the .500 mark, with four wins and six losses. He has notable victories over Marcin Held, Jim Miller and Ross Pearson, but he’s also lost to Al Iaquinta, the aforementioned Lauzon, Ricardo Lamas and Myles Jury.

Brown, on the other hand, hasn’t been doing too good lately. After going on an absurd seven-fight winning streak that lasted two years and five months, which definitely ranks up there for welterweight fighters that aren’t defending a title, Brown has now lost five of his last six fights. He’s been finished by the likes of Demian Maia, Jake Ellenberger and Donald Cerrone.

With all of these longtime UFC veterans facing off on one card, it should be really interesting who comes out on top. Can guys like Brown, Lauzon and Arlovski pull something off and possibly making one last shot at a title?