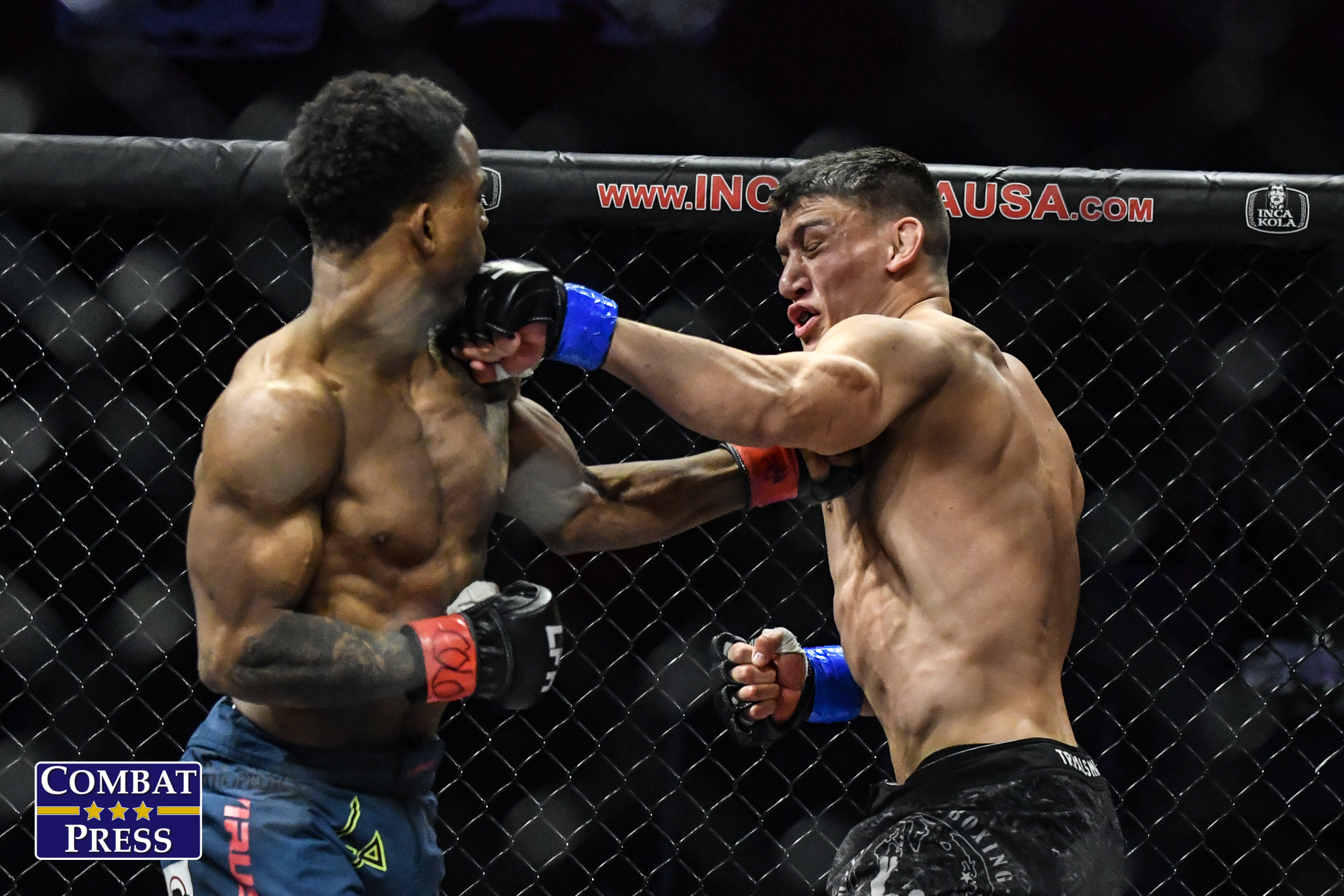 Have a Bachelor’s degree in finance? How about a career as a professional fighter? Seems like a logical progression.

Actually, that progression is the path that Colorado’s Michael Stack took, but it wasn’t quite that simplistic.

“As a young kid, I was pretty competitive,” Stack told Combat Press. “I bounced around a lot to a bunch of different elementary schools, so I was always the new kid. and. I always got into fights, because that’s kind of like the way it is. The new kid has to get tested every once in a while, most the time. Since I was always the new kid, that’s what was going on. My dad boxed, so I was kind of raised in combat sports. When I first saw my UFC, I was probably in ninth grade, and I was like, ‘Man, that seems pretty cool. We’re trying that out.’ I already liked competing, and I think fighting is one of those purist sports, where it’s man versus man. I think it’s like the most raw that you could possibly get. You can beat me in a race, but if I beat you in a fight, we know who the better man is.”

Stack may have had his share of tussles as a kid, but he didn’t come right out of the gate as a trained fighter. Growing up in the Denver area, he bounced around from Aurora to Centennial to Lakewood, before his family finally settled in Arvada, which is where he ultimately went to high school. There, he wrestled, swam and played football. When he graduated in 2013, he began training at Grudge Training Center under the tutelage of Trevor Wittman and his coaching staff. After moving up to Fort Collins to go to Colorado State University, he landed at Trials MMA with coach and IFL veteran Ryan Schultz.

“When I moved up to school, I was at Trials, and then I’d come back down for the summers and train at Grudge,” Stack said. “But most of the time, up until about 2016, I was in and out of the gym. And I didn’t fight until 2016, and that was just because I was a broke college kid. I didn’t have the money for the dues and just didn’t have a lot of time. I was spending a lot of time being in school, so school and then work.”

While Stack didn’t graduate from CSU until 2017, he started buckling down with his training the prior. He made his amateur debut in Feb. 2016 under the Sparta Combat League banner, and in 14 months, he was 4-0 in the SCL cage. He made his pro debut in the same promotion in Oct. 2018, and went 3-0 as a pro before signing with Legacy Fighting Alliance at the end of 2019 where he won his promotional debut by first-round submission. So, in under four years, he was 8-0 in his combined pro and amateur careers with five finishes, three unanimous decisions, and zero calculators needed.

After a cancellation due to pandemic shutdowns, Stack was back in action in Jul. 2020, but he suffered his first loss to future UFC and Bellator veteran Kai Kamaka III. After three rounds, the judges awarded Kamaka the victory. By Jan. 2021, he was back in the LFA Octagon, and he went on a three-fight winning streak over the next 13 months. Needless to say, with a 7-1 pro record, he has been quite successful thus far in his fighting career.

“I’m constantly getting better,” said Stack. “I think I’m getting better every single fight. If I have to improve on something, I go out and, if I have to travel to three different gyms and make three- to four- hour driving trips every single day, that’s what I’ve been doing. I do what it takes to be better and to grow. I learned a lot when I went to Thailand back in 2018. And then after that, I had my first pro fight and did really well and just being around like really good competitors, other great fighters, great coaching. You know, those are really important things – having people that you trust in your corner, having good guys to train with and good coaching that is willing to look at your needs and help you grow.”

Stack currently lives in Windsor, Colo., which sits east of I-25, south of Fort Collins. However, he trains at a few different places, all of which are can be up to an hour away from each other, depending on traffic. His main gym is still Trials, but he also trains at Pound 4 Pound Muay Thai with GLORY Kickboxing and MMA veteran Justin Houghton and his crew in the southwest Denver Metro area. In addition, he makes trips out to High Altitude Martial Arts in the far eastern side of Denver. That is one of the homes of guys like BJJ black belt and striking coach Christian Allen and UFC vet Cody Donovan.

In addition to his Colorado training, Stack has been to Tiger Muay Thai in Thailand, which he mentioned previously, and he has also been to Roufusport in Milwaukee and Syndicate MMA in Las Vegas. In a way, the finance major never stopped his quest to educate himself, even after college. All of this learning has led him down a path to the LFA title, which he is scheduled to fight for tonight in the main event of LFA 133 at the Magness Arena right in his hometown of Denver.

Back at LFA 126 in March, after a couple changes of opponents, Brazilians Jose Delano and Jonas Bilharino faced off for the organization’s vacant featherweight strap. However, Delano missed weight, negating his chances for a title win. He ended up beating Bilharino, after five rounds, on all the judges’ scorecards, but the title remained vacated. With Stack sitting next in line, he earned the chance to fight for the vacant belt tonight. Delano, however, is no walk in the park.

The 25-year-old Brazilian is currently riding a nien-fight winning streak, and hasn’t lost a bout since Apr. 2015. He has at least three submissions and two knockouts, and his overall pro record is 10-2. However, he stands about four inches shorter than the six-foot-tall Stack. The Coloradan is looking forward to the title shot.

“I know he’s a Muay Thai fighter,” said Stack. “It looks like he strikes a lot. He did well in his last fight. He had good cardio, good volume. I think he’s going to be a good competitor and a good challenge. I think beating this guy is going to show that I’m ready for that next level and that I deserve that LFA title for sure. I think he’s going to bring it. I think we’re in for a war. I’m excited to compete against this dude. I hope that he brings it, and brings out the dog out of me. We’ll see if he’s got that ability.”

Now, for someone in Stack’s position, this is an interesting time of year. The UFC started recruiting fighters for Dana White’s Contender Series back in March, and the roster is far from full. It doesn’t kick off until the last week of July, and the first couple weeks are the only two that have what would be considered a full card. With Jason House and Lance Spaude of Iridium Sports Agency leading the charge, the Stack bug is certainly in the ear of the UFC brass. However, an LFA title, while not completely guaranteed, has been shown to punch a ticket directly into the big show. So, does he wait and risk a loss, or try to get in front of Dana White himself?

Well, tonight, live on UFC Fight Pass, Stack has that chance. He is still relatively young in his career, but he’s on a roll, and does not plan on slowing down any time soon. He has a one-and-a-half-year-old daughter, Payton, who he needs to provide for, a solid team of coaches and training partners, and, at the end of the day, he loves fighting. Tonight, he will have a chance to take a major step in his career as he walks into the cage for the main event of LFA 133: Stack vs. Delano.

“I think I’m an exciting fighter, man,” said Stack. “I think that this match-up here, stylistically, is going to be good for the fans. I think you’re going to see a lot of punches thrown – high-level guys competing and guys that are on the on the verge of the next level. I think you’re going to see a really good fight, as far as high-level, I think it’ll you’ll see high-caliber, and that’s my opinion on it. And you know, besides that, I’m a really cool dude and handsome as hell.”