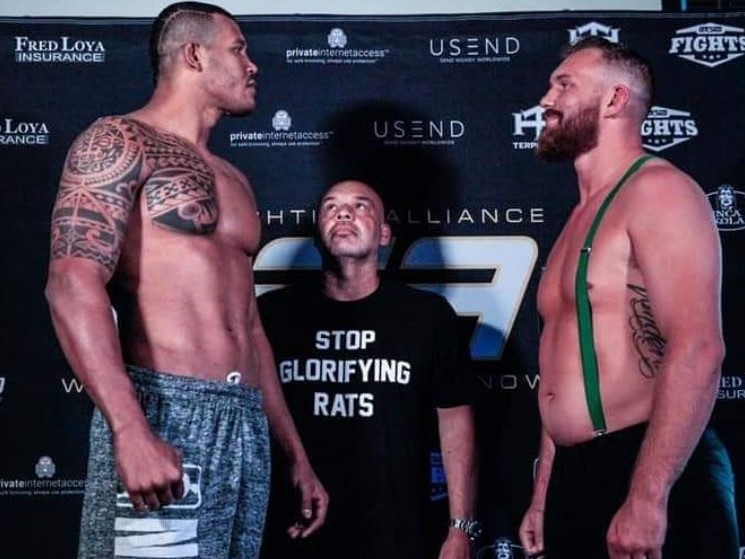 This series started during my time as a writer for Bleacher Report, continued through my tenures at Today’s Knockout and FanSided and now it stays alive another year here at Combat Press.

Let’s start with the heavyweight division, a weight class that has added new talent, but needs more fighters on the roster to add depth to the division. It’s still one of the toughest classes to fill, but there is good talent available.

Hugo Canha hasn’t taken an abundance of pro fights thus far in his career, but the Tata Fight Team product has already proven that he’s an intriguing heavyweight prospect with good upside. The 26-year-old Brazilian stands 6-foot-4 and tilts the scale at 260 pounds. He has finished every fight of his pro career in impressive fashion.

Cunha has a wrestling background, which is rare for a Brazilian fighter. He is a good athlete and strong as an ox, which helps him score his powerful takedowns. He lands huge ground-and-pound on the mat. He also has a submission arsenal. In 2019, he took fights with Titan FC and Future FC. Under the Titan banner, he scored a second-round TKO of Marino Eatman. In his Future FC appearance, he halted Henrique Silva with a choke. Those wins catapulted Cunha into the spotlight.

Cunha has stepped up this year to prove he can hang with decent fighters. Given his strong wrestling acumen, finishing ability, and athleticism for a man his size, There’s no doubt this is a guy that can compete at the highest level. His destructive ground game should be enough to get him on the UFC’s roster in the near future.

Entering the 2019 season of the Professional Fighters League, Ante Delija was considered a dark horse by many MMA scouts in a field dominated by wrestlers and PFL veterans. He competed in one regular-season fight, where he defeated Carl Seumanutafa. His second regular-season affair was canceled, and he did not appear in the playoffs. He then signed with Poland’s KSW organization, where he finished off his 2019 campaign.

A disciple of Mirko “Cro Cop” Filipovic, the 29-year-old Croatian is a solid hand in the ring. He can kickbox a bit, which is no surprise given his coach, but what we saw in 2019 was a solid wrestler and heavy ground grappler that is good at holding position and throwing ground-and-pound. At 6-foot-5, he’s a tall heavyweight, but his weight — 238 pounds — makes him a midsized heavyweight.

Delija has a good amount of experience and has made great strides in his game the last few years. He has proven that he’s ready for the big show. His last win, a knockout of UFC vet Oli Thompson, was additional evidence that he should be on the short list of heavyweights deserving of UFC President Dana White’s attention, especially with the increased amount of events in Europe these days.

Despite taking a loss in 2019, Team Nogueira’s Renan Ferreira is a top heavyweight prospect. He should be the rightful Legacy Fighting Alliance heavyweight champion, too. The 6-foot-10 Brazilian weighs in around 250 pounds, so he’s not one of those flabby heavyweights that looks like the guy destroying the local buffet. He’s an in-shape big man with long limbs and the skills to complement those natural gifts.

Ferreira’s loss in 2019 came to Brett Martin as a result of a disqualification from strikes to the back of the head. Ferreira was dominating the fight up until that point with striking and ground-and-pound. Sure, a few shots may have landed to the back of Martin’s head, but they were intended to go to the side of the head during what would have been the finishing sequence of the fight. The Brazilian scored a TKO win over Fabricio Almeida and a triangle-choke finish of Jared Vanderaa in his other outings in 2019. These wins reminded us why this all-around fighter is so good.

Regardless of the Martin DQ, Ferreira should be considered a heavyweight that could hold his own in the UFC. He’s a deadly finisher with an aggressive, exciting style. His size and length would give many fighters trouble. The respected Team Nogueira camp ensures that he’s getting great reps every day, too. He would be a perfect fit for the UFC.

Russia is one of the biggest sources of quality heavyweight talent in the world right now. This continues to be apparent when it comes to 33-year-old Evgeniy Goncharov. He’s a top regional champion, an accomplishment he achieved with a victory over American veteran Tony Johnson Jr. in 2019.

The PATb export is a decent-sized heavyweight at 6-foot-2 and around 250 pounds. He’s a good athlete who’s in good shape. He’s well rounded, with knockout power on the feet, good takedowns, effective ground-and-pound, and submission ability. Goncharov struggled earlier in his career, but he’s pulled it together in recent years to beat strong competition.

Goncharov is clearly a quality heavyweight. The 33-year-old is no rookie, but he still deserves a chance to prove himself at the top level.

It’s never easy living in the shadows of an ultra-successful sibling in the sport of MMA. Mohammed Usman knows this — his brother, Kamaru, is the UFC welterweight champion. However, Mohammed is pushing forward and emerging as one of the top prospects in the heavyweight division. The Fortis MMA fighter hopes to forge a path similar to his brother.

Mohammed is a big, strong, athletic heavyweight that gets great training out of the emerging Fortis MMA camp. The former University of Arizona athlete has a strong wrestling attack that he uses with a dangerous combination of sledgehammer ground-and-pound and underrated submission ability. His go-to hold is the kimura, which requires a combination of technique and brute strength. In 2019, Mohammed recovered from his only career loss by running up a 3-0 record. After scoring a dominant decision over Frank Tate to start the year, Usman scored back-to-back striking stoppages over Alexis Garcia and Reggie Cato. All three of his wins came under the Titan FC banner.

Mohammed might have an easier route than most into the UFC, given his brother’s current standing in the company. The heavyweight division does not have many athletes that match the caliber of the natural gifts Mohammed possesses. He would be a problem for most in the division. He’s still improving, too, so who knows how good he will be in a couple years.