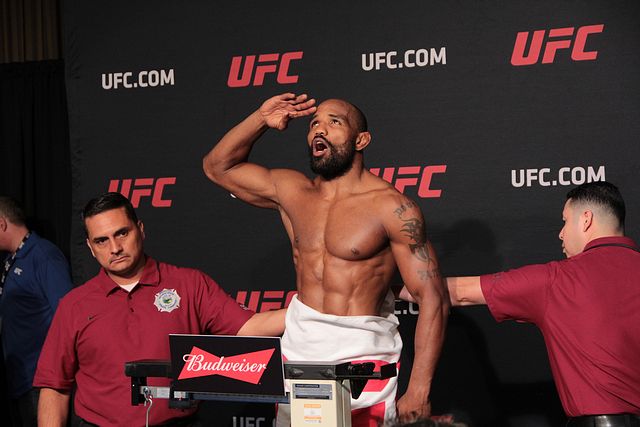 Saturday night, former UFC middleweight contender Yoel Romero will make a much-anticipated Bellator debut, when he faces fellow veteran Phil Davis in the main event of Bellator 266. Although, this will be Romero’s first light heavyweight bout in 10 years.

Romero signed with Bellator in December of 2020. He was originally scheduled to face Anthony “Rumble” Johnson in an opening round match-up of the Bellator Light Heavyweight Grand Prix. However, he was forced to withdraw a week before the bout after he failed his medicals due to an issue with his eye. He was eventually cleared to compete, and, in August, it was announced that he would be taking on Davis.

Romero has not fought since his last UFC contest, when he lost to middleweight champion Israel Adesanya in a title bid. This Saturday will be the Cuban’s first fight at light heavyweight since 2011 when he had his first and only Strikeforce bout. Romero may find that many of the physical advantages he enjoyed at middleweight could be negated by fighting at light heavyweight. This could be an issue for him as his explosiveness and power have been two of his most important attributes in his MMA career.

Robert Whittaker was arguably the only fighter who was able to take Romero’s power and win in the UFC middleweight division. Nearly every other time he successfully connected with a big strike, there were devastating consequences for his opponents. Naturally bigger fighters at light heavyweight may be able to take these shots without getting rocked and badly hurt.

Despite being an Olympic Silver medalist in freestyle wrestling, Romero now chooses to fight almost exclusively on his feet. This may be due to the fact that he has not been able to to successfully turn this wrestling pedigree into a dominant ground game in MMA. Romero has often struggled to keep opponents down after he has landed takedowns. Failing to secure takedowns has drained his cardio significantly in the past.

In recent fights, he has seemed averse to mixing in grappling. This has been the case even in contests where he has seemingly had the advantage in this department. His approach to wrestling isn’t likely to change in Bellator’s light heavyweight division. Instead, Romero will likely utilize his wrestling from a defensive standpoint, considering there are high-caliber grapplers in the weight class, such as Davis, Corey Anderson and Ryan Bader.

As Romero has gotten older, he has focused on preserving his gas tank during fights. His relatively poor conditioning has necessitated a low-output approach. The 44-year-old tends to fight on the back foot and lure his opponents into a false sense of security before exploding with big strikes. This strategy is risky, as it relies on him connecting with the few punches that he throws. His lack of activity cost him dearly at the end of his UFC run.

Romero lost four of his last five fights in the Octagon by decision, and those were close contests that could have easily gone the other way had he been slightly more active. However, Romero could point to this way of fighting as one of the main reasons why he has been able to be so competitive against much younger fighters.

The Cuban carries an intimidation factor that makes him one of the most dangerous athletes in MMA today. The threat of his power resulted in the aforementioned Adesanya becoming extremely hesitant. Romero will take confidence from knowing that he almost completely stifled the offense of one of the most sophisticated strikers in the sport. His presence could easily have the same effect on technical strikers like Davis and current Bellator Light Heavyweight Champion Vadim Nemkov.

This weekend, Davis will pose a tough stylistic match-up for Romero. Davis has a wrestling background, but has also developed into a technically proficient striker. He is tall and makes great use of this length through his jab and leg kicks. He will not want to stand at close quarters and trade with Romero, but he can rely on his excellent chin. The former All-American wrestler has never been knocked out in 28 professional fights.

One weak spot for Romero is his traditional boxing stance, which makes him vulnerable to leg kicks. Adesanya made adjustments in the second round of their fight to exploit this and inflicted significant damage to Romero’s legs. Davis will also have a big height and reach advantage over the former Olympian and has a solid kicking game himself. Therefore, it will not be a surprise if he implements a kick-heavy attack to keep Romero at distance.

Light heavyweight has arguably become Bellator’s strongest division in the past year. At 44, Romero knows that time is not on his side in his quest to become a world champion. However, he still possesses traits that make him a formidable opponent to anyone he faces. The combination of his power, explosiveness and accuracy means that he is always dangerous on the feet, while his wrestling background helps him keep fights standing. Romero’s ability to make an impact in the division will certainly be tested, starting with Davis at Bellator 266.