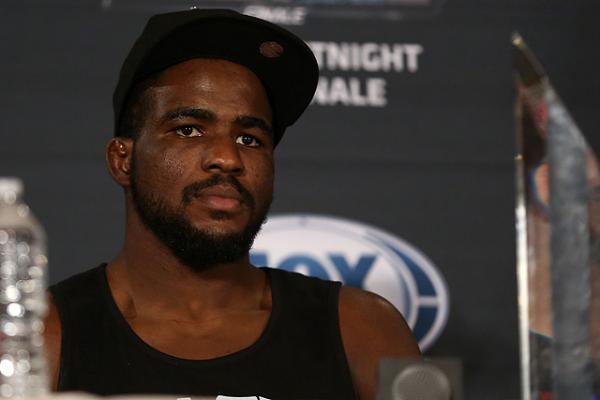 As we saw with Anderson Silva, who retired at the age of 45 after his fight against Uriah Hall on Saturday, legends of the sport will never be forgotten. The treatment and chorus of well wishes were more than appreciated after he put his body on the line for so long. Bellator 251’s Melvin Manhoef is now 44 year old. With 48 fights on his resume, he, too, is closer to the finish line than he is the starting line.

Manhoef went through a stretch in which he won three fights while entering the cage a total of nine times. However, he has now won two fights in a row, which is his longest streak since 2012 when he fought for Dream, ONE Championship and Road FC and won three consecutive fights. The aging striker was originally scheduled to start his 2020 campaign with a bout against Simon Biyong at Bellator 248 in Paris on Oct. 10, but he was rebooked by Bellator MMA to headline Bellator 251 against former UFC light heavyweight Corey Anderson instead.

Anderson had a 10-5 record in the UFC before the company decided to let him go on to different and greener pastures. The last time he went to work before the public was in his sequel bout against Jan Błachowicz at UFC on ESPN+ 25. He was put away just three minutes into the first round with a right-handed hook by the Polish fighter, who would go on to become UFC’s light-heavyweight champion in his next bout against Dominick Reyes.

Bellator 251 kicks off at the Mohegan Sun Arena in Uncasville, Conn., on Thursday, Nov. 5, with the prelims at 4:45 p.m. ET on Bellator MMA’s YouTube Channel and DAZN streaming platform. The main card follows at 7 p.m. ET on CBS Sports Network and DAZN.

UFC veteran Corey Anderson will be introduced to Bellator fans in a clash with 44-year-old Melvin Manhoef. Rate Manhoef’s chances at pulling off a spoiler win here.

After a partnership that lasted almost seven years in the UFC, Anderson will be fighting for the fifth promotion of his career against the two-time Bellator middleweight title challenger Manhoef.

Anderson seems to have the odds in his favor with a five-inch height and nine-inch reach advantage. However, like an efficient kitchen on a busy Friday night, Manhoef delivers knuckle sandwiches that humble a wide range of opponents. Most recently, he was able to knock out a man in Yannick Bahati who was four inches taller and also held a nine-inch reach advantage at Bellator 230 in under two and a half minutes of work.

On a scale from 1 to 10 for his chances of playing spoiler, with 1 being “highly unlikely” and 10 being “most likely,” Manhoef checks in with a 7. With father time being undefeated, fight styles will have to adjust over time if you want to sustain a long career like Manhoef has. Even though Manhoef is usually the smaller guy in head-to-head match-ups, he is an incredible athlete who still has his speed and his power in year 25 of his electrifying career. While he won’t notch a finish against Anderson, he could win by decision if he’s able to effectively evade Anderson’s punches and avoid the clinch. The more Manhoef keeps the fight in the center of the cage, the higher his chances are of defeating Anderson.

This is no slight on Anderson at all. He’s lost against the best the sport has to offer, but he’s been able to win at a high level as well. He has defeated the current UFC No. 3 light heavyweight Glover Teixeira and the No. 9 Johnny Walker. It is reps in the ring against top-tier talent that will predictably serve him well against Manhoef, but the fight could go either way.

Tyrell Fortune’s rise up the heavyweight ladder has been derailed over his last two fights. First, he was finished in the first round by Timothy Johnson. His next fight was ruled a no-contest after an accidental low blow. Does Fortune return to the win column against promotional newcomer Said Sowma?

As unfortunate as it is, Fortune’s misfortune has been a huge blow for a man who began his professional career undefeated through eight fights. However, he should take solace in the fact that his career is far from over. He is in his expected prime at the age of 30 years old. If people had the ability to choose outcomes, most people would prefer to get their first taste of defeat early on. For Fortune, that part of his destiny is now behind him.

There is no question that being winless in 2020 has left a bad taste in Fortune’s mouth. He wanted to prove himself worthy after being dealt his first professional loss in catastrophic fashion by the aforementioned Johnson. Yet, on a Bellator 239 card that was stuffed with 16 scheduled bouts, an unintentional below-the-belt strike dashed those hopes just under three minutes into the first round against Jack May.

In the bout against Johnson, Fortune had the tendency of having his hands by his side when in striking distance and when fleeing the range. If he fixes that, he’ll be able to get the result for which he’s been yearning. He is incredibly agile for a heavyweight, and his wrestling background serves him well.

Thursday’s fight against Sowma will mark Fortune’s seventh fight with a Bellator newcomer. Sowma is enjoying the ride with his current six-fight winning streak. The 27-year-old Coconut Creek, Fla., resident has spent a majority of his fight tenure with Titan Fighting Championships, where he was crowned the promotion’s heavyweight champion after he dismantled Bobby Brents in the third round via TKO punches at Titan FC 64 two months ago.

Joe Supino and Jaylon Bates, a pair of fighters that are making their professional debuts.

Bates spent two years in the amatuer ranks, where he compiled a 9-0 record. Seven of those nine bouts ended in a knockout or submission. Much like Ronda Rousey did before becoming a pioneer in women’s MMA as UFC’s inaugural bantamweight champion, Bates had the opportunity to cut his teeth in Tuff-N-Uff as a young prospect. He even became that promotion’s featherweight and bantamweight champion.

Bates was able to be successful as an amateur without the use of elbow strikes or knees to the head. He dominated many of his opponents with his ground-and-pound, and now the legal strikes available to him at the professional level could help him unearth his true potential. The psychological warfare Bates imposes on his opponents when he doesn’t sit on his stool in between rounds, like we saw in his bantamweight championship bout with Christopher Elisarraras in 2018, is uncanny.

Supino has similarly garnered elite amateur badges with a 66 percent finish rate among his six wins. He has never been knocked out either, with his two losses coming via decision. His toughest test to date was against Robert Rosa, who was 3-0 heading into his bout against Supino. There was a lot of hype around Rosa up to that point, and it didn’t take too much time to see why in their fight with the vacant Dead Serious MMA catchweight belt at stake. Rosa’s power caught the attention of Supino, who shook his head a couple of times throughout the fight and was dropped by Rosa’s combination punches. However, the fight ended with Supino’s hand raised after he slipped Rosa’s lead jab and countered with a left hook for the technical knockout.