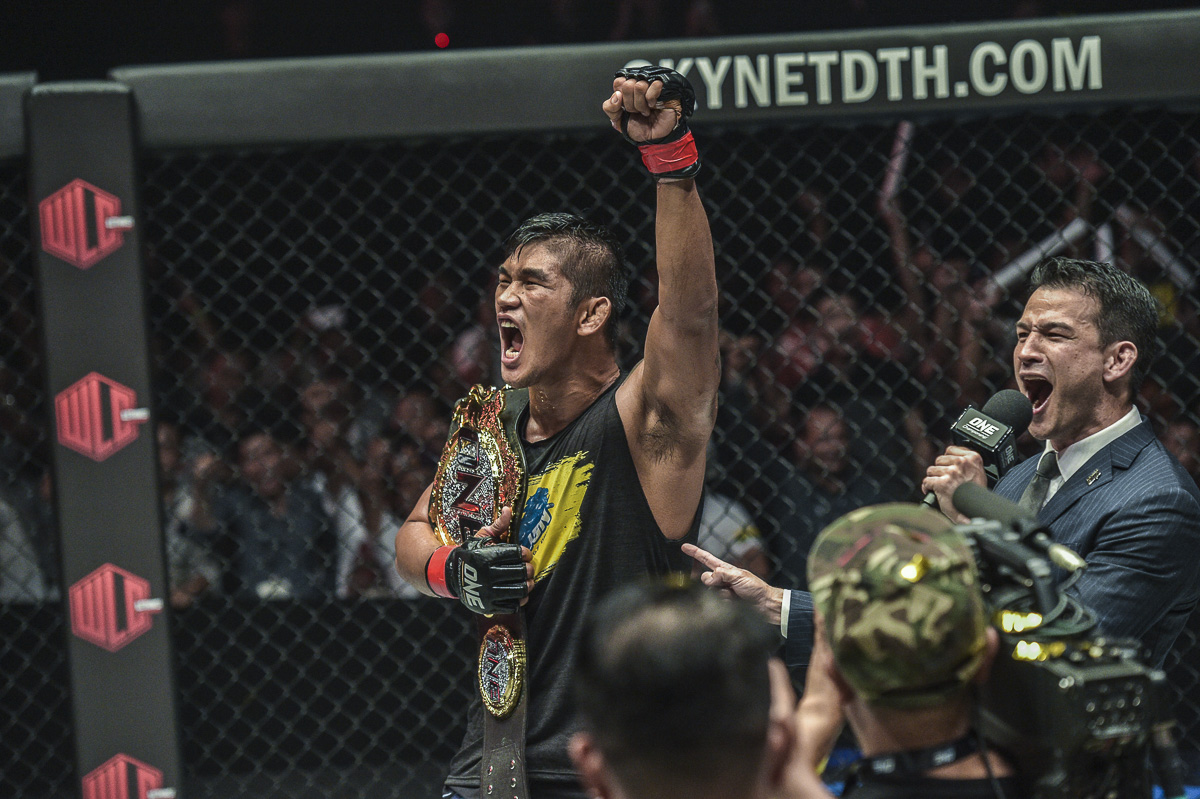 ONE Championship: Inside the Matrix Preview and Predictions

Fans should be ready for more than just a glitch in the matrix on Friday in Singapore. ONE Championship is set to send shockwaves through the martial-arts world with its Inside the Matrix event. This fight card features an almost unheard-of four title bouts in one night, which promises to treat fans to battles at the highest level.

In the highlight of the card, two-division ONE titlist Aung La N Sang attempts to defend the middleweight championship against undefeated challenger Reinier “The Dutch Knight” De Ridder. N Sang is making the fourth defense of the title he has held since June 2017 when he decisioned Vitaly Bigdash. It will be his first fight in a year, though. His last bout took place in October 2019 when he knocked out Brandon Vera for the ONE light-heavyweight title.

De Ridder, on the other hand, looks to continue his unbeaten run in MMA. So far, he has compiled a record of 12 wins with no losses and sports a scintillating finishing rate of 93 percent. He has torn through every opponent placed in front of him, including the last three under the ONE Championship banner. De Ridder is a black belt in both judo and Brazilian Jiu-Jitsu. He is banking on his ground superiority to wrest the title from “The Burmese Python.”

Immediately preceding the battle between N Sang and De Ridder is the match between reigning ONE lightweight champion Christian “The Warrior” Lee of Singapore and challenger Iuri Lapicus of Moldova. Lapicus poses a huge threat to Lee’s lightweight reign. The Moldovan has never tasted defeat in his 14 fights as a professional. This impressive run includes a jaw-dropping 12 consecutive first-round finishes, four wins by some form of knockout, and eight submissions. However, Lee does own the ONE record for most finishes with 12, which consists of eight knockouts and four submissions.

The third title fight of the night is the one between defending ONE featherweight kingpin Martin “The Situ-Asian” Nguyen of Australia and his challenger, Thanh Le of the United States. This match has the potential to be the most explosive of the night, with the two combatants being both very heavy-handed. Nguyen has nine TKO finishes in his 13 wins. Le, on the other hand, has 10 TKO wins. Fans can’t afford to blink, because this fight could be over in an instant.

For the fourth title bout of the night, Xiong Jingnan of China puts her ONE women’s strawweight championship on the line against challenger Tiffany Teo of Singapore. This fight is actually a rematch. The two ladies met before in January 2018 for the inaugural ONE women’s strawweight belt, which Xiong won via TKO in the fourth round. A determined Teo seeks redemption and the ONE title as well.

ONE Championship: Inside the Matrix takes place at the Singapore Indoor Stadium on Friday, Oct. 30. Fans can see the full event on the ONE app and ONE’s YouTube channel at 6:30 a.m. ET. American fight fans can find the broadcast on the B/R Live streaming platform.

Which title belt is most likely to change hands this weekend?

The featherweight championship currently held by Martin “The Situ-Asian” Nguyen, who is set to defend the strap against Thanh Le, the division’s No. 3 contender.

Nguyen is known for his dynamite right hand. He has used its power to knock out nine of his past 13 opponents. This includes then-lightweight champion Eduard Folayang, whom Nguyen knocked out cold with a counter right to capture the title in violent fashion. That win proved that Nguyen, who had jumped to lightweight from featherweight to challenge Folayang, is able to carry his power to a higher division.

Le is also known for his heavy hands. He owns an impressive 11-2 record, with 10 of those victories coming by way of knockout. This includes finishes in his last three appearances, which, by the way, have been all of his fights in ONE so far.

Nguyen has the experience over Le, especially in terms of bigger fights and in the quality of his competition. Yet, Le might be catching “The Situ-Asian” at the right time. Le, who is riding that three-knockout streak in ONE, will be motivated to perform well in the biggest fight of his career. He’s also been more active than Nguyen recently, having fought as recently as January. The defending champ, meanwhile, is coming off a 14-month layoff.

Le will eke out a win in a close, action-packed war that could see one or both men hurt in the course of the fight.

Which title belt is least likely to change hands?

The women’s strawweight championship held by China’s Xiong Jingnan. “The Panda” is set to defend her title against a familiar foe, Tiffany “No Chill” Teo. The two ladies battled it out in January 2018 for the right to become the ONE inaugural strawweight titleholder, and Xiong won the slugfest and the title by fourth-round stoppage.

Since then, Xiong has managed to defend her belt a total of three times. The only blemish to her record during this span came in her last bout when she dropped down one division to challenge Angela Lee for the ONE women’s atomweight title. Xiong had previously defeated Lee in a strawweight title clash.

Teo has also picked up some victories since the title clash with Xiong. In February, she stopped Ayaka Miura to earn her first knockout victory since 2016 and her first ever in ONE. Going against “The Panda” is a different proposition, though, and Teo surely knows this.

This fight is likely to follow the route of the first one, with the only difference being that Xiong will have an easier time against Teo in the rematch. This one ends in a knockout win for Xiong in the middle to late rounds of an exciting battle.

What can fans expect from the two remaining championship tilts?

The main event between two-division ONE champion Aung La “The Burmese Python” N Sang and unbeaten challenger Reinier “The Dutch Knight” De Ridder is interesting and definitely worthy of the top billing.

N Sang seems to be at the peak of his powers. He’s riding a seven-fight winning streak that includes a monumental victory via second-round knockout over ONE heavyweight champion Brandon “The Truth” Vera in October 2019 for the ONE light-heavyweight title. This time, N Sang will attempt to defend the middleweight belt against De Ridder.

De Ridder’s perfect record includes eight submissions, which is proof of his superior grappling skills. It’s what has given him an immaculate record up to this point, and it’s what he’s going to bank on in his title fight against the defending champ. However, the wealth of experience that N Sang possesses should be more than enough to help him ride out some rough sailing while De Ridder continuously seeks to take him to the ground. Once N Sang connects with a solid strike, he’ll put the lights out for De Ridder.

The co-headliner, meanwhile, will probably be one of the most competitive fights of the night. Christian Lee is likely going to have the toughest test of his reign as ONE’s lightweight champion so far against the unbeaten Iuri Lapicus. Lapicus has seemingly breezed through his every opponent on the way to a perfect 14-0 mark. However, that’s not even the most astonishing fact about his record — that would be the 13 first-round finishes. This one will end in a close decision victory for the challenger from Moldova.

Does Ritu Phogat emerge with her undefeated record intact after her clash with Nou Srey Pov in the evening’s opener?

The first fight of the night is a classic match-up between a striker in Pov and a wrestler in Phogat.

Both female warriors have only two MMA bouts to their names, with “The Indian Tigress” Phogat standing undefeated and Pov having a 1-1 record. When it comes to striking, though, Pov is miles ahead. She has over 90 victories in Kun Khmer, as well as a world title. She is also experienced in boxing and lethwei, which makes her a formidable striker.

Phogat is the one with the edge on the ground, however. She is an elite wrestler who has won a lot internationally before making the switch to MMA. This fight will be a chess match as to who will establish dominance. However, once Phogat takes down Pov, it should be over.