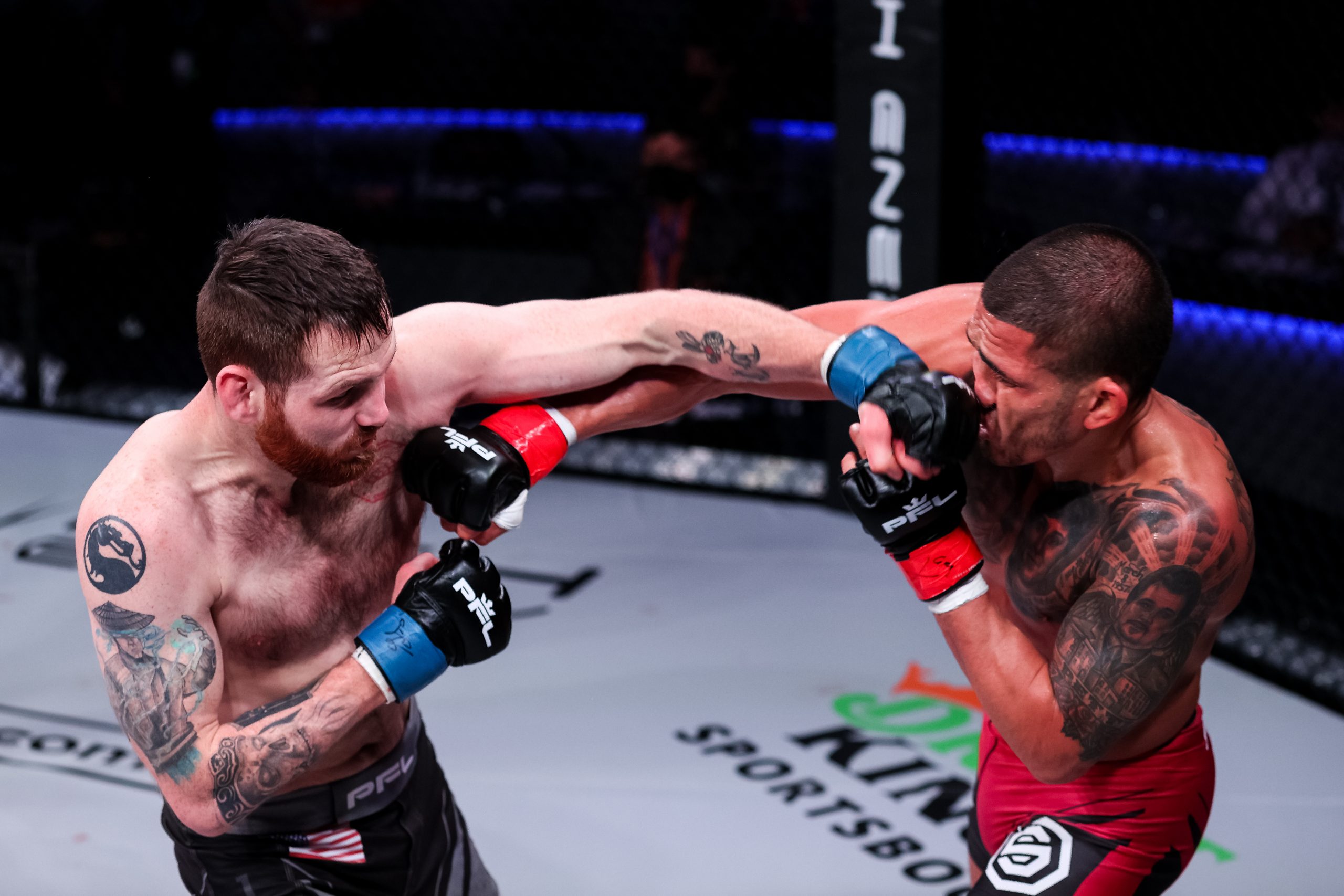 The Professional Fighters League returns to action on Friday, Jun. 17, with fights in the Regular Season of the lightweight and light heavyweight divisions. In the main event, Clay Collard meets Alexander Martinez as both men look to move to 2-0 in the 2022 season and solidify their place in the standings to qualify for the playoffs. Both men currently hold three points after decision victories in their first bouts of the season. Collard and Martinez sit at No. 3 and No. 4, respectively, in the rankings, and the current second-ranked fighter in the division, Raush Manfio, will also be in action on Friday as he takes on Olivier Aubin-Mercier.

In the co-main event slot is a light heavyweight showdown between Antonio Carlos Jr. and Bruce Souto. The two fighters enter the bout on opposite trajectories. Carlos Jr. is on the heels of a stellar first-round submission victory, and Souto is looking to get back on track after suffering a second-round TKO loss. Carlos Jr. notched six season points with that submission win and sits currently as the number-one ranked fighter at 205 pounds. He will look to separate himself from Omari Akhmedov, who also has six points, by notching another first-round finish.

2022 PFL 4: Regular Season takes place in Atlanta, GA from inside the Overtime Elite Arena. The card will air in its entirety on ESPN+ starting with the preliminary card at 7 p.m. ET. The main card will also be available on ESPN starting at 10 p.m. ET. Let’s take a look at the preview and predictions.

Clay Collard and Alexander Martinez both picked up decision wins in their first bouts of the 2022 season; does either man get a finish this time around, and, if so, who?

Clay Collard has been incredibly consistent since joining the PFL. Every single one of his fights has gone the distance. His only loss in four PFL fights was a unanimous decision loss to eventual 2021 champion Raush Manfio in last year’s semifinals. Alexander Martinez has also been a decision machine lately, as all four of his contests in the PFL have gone to the judges’ scorecards. He sits 2-2 inside the promotion, but his unanimous decision win over Stevie Ray was arguably the best performance of his career. He has six career finishes, but none of them came over opponents of Ray’s caliber.

This fight will likely go the distance, but, as we have seen innumerable times over the years, that doesn’t mean it won’t be entertaining. Early on in this fight, Martinez will likely try to get the fight to the canvas where he should have the grappling advantage. Expect him to struggle to get Collard down to the mat, as the professional boxer’s takedown defense has continuously improved. That will lead this fight towards becoming a standup affair for the second and third rounds where each fighter will have his moments throughout. Eventually, Collard will prove that his striking remains more technical and precise late in the fight, and he will pull away in order to secure the victory and earn another three points in the 2022 PFL standings.

Antonio Carlos Jr. needed just 29 seconds to secure a submission in his last fight; will he be just as impressive against Bruce Souto?

Well it’s tough to look any better than Carlos Jr. did in his 2022 debut. There’s hardly anything to critique because of how quickly he got the finish. The odds are it will take longer this time around, but he will pick up another submission win and probably before the end of the opening frame. Bruce Souto made an impressive statement on the PFL Challenger Series when he notched a late first-round knockout over Travis Davis, but struggled in his official 2022 PFL debut, losing via second-round TKO to Rob Wilkinson.

Frankly, Souto isn’t on the same level as Carlos Jr., and that will be clear from the opening bell. “Shoe Face” has been in the cage against some of the best fighters in the world and has a win over former UFC middleweight title challenger Marvin Vettori. Carlos Jr. will get Souto down to the canvas early and methodically work to take his back, where he will eventually sink in a rear-naked choke and force Souto to tap. In some ways, it will be more impressive than his last outing, because there will be minutes of sustained dominance.

Raush Manfio has gotten off to a hot start in 2022 as he looks to repeat as PFL lightweight champion; how does he fare against former UFC contender Olivier Aubin-Mercier?

I said it prior to Raush Manfio’s last fight, and I stand by my claim, that he is the most talented lightweight in the world who is fighting outside of the UFC right now. He will take another step in proving that by soundly defeating Olivier Aubin-Mercier. The added motivation of taking on Aubin-Mercier, who just squeaked out a split decision win over Manfio’s best friend and teammate Natan Schulte, will have Manfio in top form and ready to deliver a standout performance. This fight will end in the second round with a knockout delivered by Manfio.

The lightweight bout between Natan Schulte and Marcin Held. This is a rematch of an Apr. 2021 bout, which Held won via unanimous decision. That fight snapped a ten-fight unbeaten streak for Schulte, so he will be looking to get that one back, as he also looks to prove that he is still a force to be reckoned with after a string of canceled bouts and two losses in his last three fights.