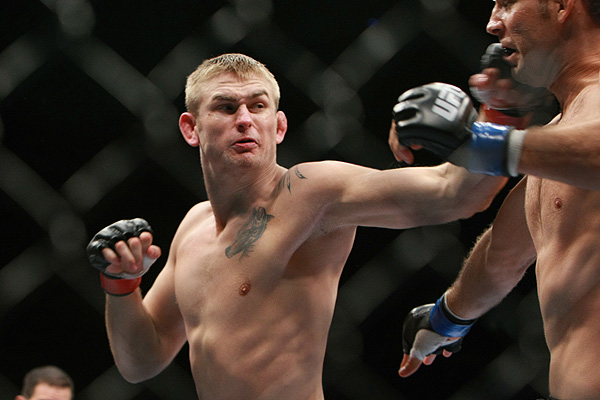 On Saturday morning, the UFC heads to Sweden with a card headlined by the last two men to challenge Jon Jones for his light heavyweight championship. Hometown favorite Alexander “The Mauler” Gustafsson squares off against Factory X product Anthony “Lionheart” Smith as both men try to right the ship and get back in the win column after falling short in their aforementioned bids for the title.

Gustafsson has been a household name with UFC fans for quite some time, spending nearly a decade with the promotion. Smith is in his second stint with the UFC, having fought once inside the Octagon in 2013 before returning in 2016 to make a name for himself at middleweight before jumping up to light heavyweight. The 30-year-old Smith, who is two years younger than his opponent, already has 45 professional fights, almost double the 23 fights that Gustafsson has amassed in his career. If either man is going to get another crack at UFC gold, they will need to make an emphatic statement in their upcoming clash.

The co-main event is a showdown between another pair of light heavyweight standouts. Gustafsson’s teammate and fellow Swede Ilir Latifi squares off against Volkan Oezdemir, the man Anthony Smith defeated to earn a title shot. Like their main-event counterparts, the co-headlining participants are also coming off losses. Oezdemir seeks to avoid what would be his fourth loss in a row and would almost certainly completely remove his name from title consideration. The same can be said for Latifi, who would prefer to avoid back-to-back defeats for the first time in his career.

Jimi Manuwa takes on Aleksandar Rakić in yet another featured fight in the light heavyweight division. These two fighters come into the contest under vastly different circumstances. Manuwa has dropped his last three bouts, while Rakić rides an 11-fight winning streak since losing his first pro bout in 2011. Manuwa, 39, isn’t the same devastating presence he once was, but he will be a step up in competition for Rakić, who looks to use a win over the former contender to catapult himself into contender status and add some young talent into the upper echelon of the aging light heavyweight division.

UFC on ESPN+ 11 takes place inside Ericsson Globe in Stockholm. Contrary to its title, the event actually kicks off on ESPN2 for the preliminary bouts at 10 a.m. ET before switching over to the streaming service ESPN+ at 1 p.m. ET for the six-fight main card. Combat Press writers Chris Huntemann and Matt Petela preview the action in this edition of Toe-to-Toe.

While he did lose, Anthony Smith went a full five rounds with Jon Jones in a light heavyweight title fight. Can Smith rebound against Alexander Gustafsson and keep his name in the title hunt?

Huntemann: This is an interesting fight, because it matches up two guys who basically have zero chance of getting another shot at the light heavyweight title while Jon Jones is champion. Gustafsson had two chances to unseat Jones and lost both times, while Smith actually had a chance to take home the title when Jones landed an illegal blow during their fight earlier this year. It was serious enough that Smith could have accepted a DQ finish and received the title, but he declined and lost a lopsided decision.

Whether you think Smith’s decision was admirable or foolhardy, the fact a fighter like Smith went five rounds with someone like Jones does speak volumes about Smith’s toughness. This will serve him well against Gustafsson. Smith has no qualms with getting down and dirty during a fight and making his opponent earn the victory. Gustafsson displayed some of those qualities in his first meeting with Jones, but could he handle it a second time, albeit against a lesser-skilled opponent?

This fight will be another example of Smith having more toughness than skill. Even though both men have plateaued as fighters, Gustafsson still has more pure skill and ability with his striking and reach. He’ll use these tools fully to his advantage in order to outwork Smith and keep alive whatever faint flicker of hope he has for another title opportunity.

Petela: Gustafsson is the more skilled fighter, this is true. This match-up could very well be a contest between the two best current light heavyweights not named Jon Jones. However, over the past few years, Gustafsson has wavered on whether or not he could, or wanted to, compete at the highest level. This uncertainty is why I’m picking Smith to bounce back after his failed title bid.

It won’t be a walk in the park, especially in “The Mauler’s” home country. This fight will go the distance, with the American getting his hand raised. Smith should be able to use what he learned in the Jones fight to effectively get inside another long-limbed, rangy opponent. In terms of grappling, Smith would be wise to take note of the observation that Jones made after his second bout with Gustafsson — that the most important thing is trying to keep the Swede down for 30 seconds and then look to advance position when Gustafsson fights to get back to his feet for about half a minute before conceding the bottom position. If Smith can replicate the techniques that Jones used to defeat Gustafsson and take the lessons he learned in his own loss to “Bones,” then he should be able to top a less than fully committed Gustafsson and get back on track toward a second crack at the title.

This card is full of light heavyweight contenders. Beyond the headliner, the match-ups include the co-main event between Volkan Oezdemir and Ilir Latifi, a featured fight between Jimi Manuwa and Aleksandar Rakić, and a preliminary bout that pits Devin Clark against Darko Stošić. Which man makes the biggest statement on Saturday night?

Petela: Latifi will make the biggest statement by knocking off Oezdemir in the co-main event.

Since bursting onto the UFC scene with three straight wins, Oezdemir fis now on a three-fight skid, though his recent split-decision loss to Dominic Reyes could have easily gone the Swiss fighter’s way. “No Time” has a fitting nickname, as he has two knockouts within the first minute of UFC fights, which is tied for the most with Latifi and retired juggernaut Anthony “Rumble” Johnson. Oezdemir won’t end this bout early, though.

Latifi is coming off a decision loss to Corey Anderson where his cardio seemed to fail him in the latter half of the fight. Prior to that loss, he beat Ovince Saint Preux and Tyson Pedro to appear on the verge of a light heavyweight title shot. His nickname — “The Sledgehammer” — is certainly fitting, as he has other worldly power in his hands. However, his submission-grappling skills often go overlooked. Latifi has an equal number of wins — five each — by knockout and submission, and it will be his grappling that makes the difference in his bout against Oezdemir.

Huntemann: I am in full agreement with my esteemed colleague.

Although the light heavyweight division has seen an uptick in activity lately, spearheaded by Jones surprisingly agreeing to defend his title against actual contenders in the division, it still suffers from both a lack of depth and talent. This is why it presents such a great opportunity for someone like Latifi, who will finish Oezdemir and stake his claim to a title shot in the future.

Latifi has only lost four times in 11 fights since 2013, and those four losses came to Gegard Mousasi, Jan Blachowicz, Ryan Bader and the aforementioned Anderson. That’s pretty stiff competition, especially with Mousasi and Bader both currently holding titles in Bellator. This will serve Latifi well against Oezdemir, who is a former title challenger but has lost three fights in a row, including a title tilt against former light heavyweight champion Daniel Cormier.

Latifi and Oezedemir’s careers seem to be on divergent trajectories, which should also work to Latifi’s advantage as he picks up a solid win on this card.

Huntemann: Bin Jo is undefeated. He has won all nine of his pro fights via finish and has held multiple belts on the Asian MMA scene. He checks every box of a relatively unknown fighter who is worth a closer look. Bin Jo will also have a quality dance partner on this card in Daniel Teymur, who has his fair share of finishes on his resume, but who has also lost three fights in a row. This is probably do-or-die for Teymur in the UFC, so he will likely look to make an example of the highly talented Bin Jo.

Petela: A pair of undefeated newcomers square off when Cowboyzinha meets “Bad News Barbie” Malecki. With only three fights, Santana is actually the more experienced fighter. Malecki has ended both of her fights before the judges’ scorecards were necessary, once by TKO and once by technical submission, whereas two of Santana’s three fights have gone the distance.

It’s not often that fans get to see two fighters with this little pro experience square off against each other, but the winner of this fight is someone fans should keep a close eye on. Malecki is a natural featherweight, too, and could quickly jump into contender status in the UFC’s thinnest division.

Both women made their UFC debuts by taking on former featherweight queen Cristiane “Cyborg” Justino. Since they both took their thumping by Cyborg, they have also fallen victim to bantamweight prospect-turned-contender Aspen Ladd. This fight is a match-up that will determine if either, neither or both of these women belong in the UFC and have a chance at making a run at a title shot in the increasingly crowded women’s 135-pound division.

Huntemann: That is a quality choice from my fellow writer. It’s interesting that Evinger was borderline dominant in Invicta FC, but seems to have struggled mightily since coming to the UFC.

As far as my choice goes, I’ll go with Sung Bin Jo and Daniel Teymur. Both Bin Jo and Teymur have multiple finishes on their resume, so the chances of a highlight knockout in this fight are high.

Petela: …or use this early card as an excuse to avoid any and all responsibilities for the day. What better way to do that than with a bottle of Svedka? There is nothing more appropriate for this card than a few Svedka-enhanced screwdrivers. Just make sure not to over indulge, as all that sugar in orange juice can be bad for you.