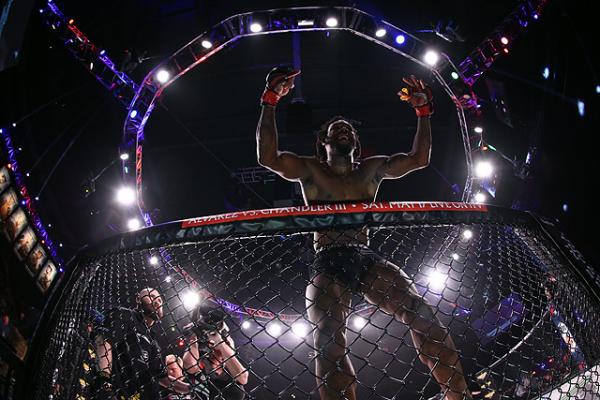 Out of Obscurity: Titan FC 33, ACB 15 and Fight Nights ‘Cup of Moscow’

The lineup for Titan FC’s 33rd offering features four championship bouts. All, from the heavyweight clash between Jon Madsen and Chase Gormley to the bantamweight showdown between Walel Watson and the undefeated Brett Johns, are very compelling in nature. However, the biggest spotlight goes to two main event fighters, Desmond Green and Kurt Holobaugh, who will vie for Green’s featherweight belt.

It seems like Green has been around for a long time, but his professional career only started three years ago. His debut performance produced a win over current UFC fighter Rob Font, and Green went on to win his first six pro fights and nine of his first 10 before entering Bellator. The former New York high school state champion wrestler entered two tournaments during his stint with Bellator. His first tournament ended in disappointment in his very first fight, but he returned in 2014 and marched to the finals of the featherweight bracket before suffering a submission loss to Daniel Weichel. Green, who trained out of Team Bombsquad before moving to the Tristar camp, shifted his focus to Titan FC after the tournament loss. His promotional debut lasted just 46 seconds, with Green scoring a quick knockout of former WEC champion Miguel Torres. In his next outing, the 25-year-old outworked Steven Siler for five rounds to capture the vacant Titan featherweight title. He will defend his strap for the first time when he meets Holobaugh on Friday.

Holobaugh streaked out to nine wins after making his pro debut in 2011. The Gracie United fighter then signed with Strikeforce and debuted against Pat Healy. Holobaugh took Healy the full three rounds, but lost the fight on the scorecards. His next outing came inside the UFC’s Octagon, where the Louisiana-based fighter dropped a decision to the aforementioned Siler. He exited the UFC as quickly as he had entered it, but he went on to win his next two fights and earn his way onto the Titan roster, where he tacked on a decision win over Eric Marriott and a 15-second TKO of Lyle Woodard.

Green will give up one inch in height, but he’ll maintain a reach advantage of roughly three inches. The wrestler is a grinder who works toward decisions. Green has only stopped three opponents via strikes and one by way of submission. Meanwhile, he has been stopped on the ground on two occasions. Holobaugh is more effective in his finishing rate, with three wins by some form of knockout and seven by way of submission. He has seen the scorecards in just five of his 15 outings.

Green has had his trouble with grapplers, but he has neutralized some fighters who rely heavily on submission finishes, including Siler and Torres. The Bellator veteran’s approach often involves hunting for takedowns and grinding out wins with positional control. That style could work well against Holobaugh, who has a lot of submission wins but also gets taken down and put in bad positions too easily. Holobaugh always puts forth a valiant effort, however, which provides the potential for a very competitive affair.

Both men will have their moments in this fight, but Green’s wrestling will be the deciding factor. He’s capable of closing the distance and scoring takedowns. He’ll have to be wary of Holobaugh’s submissions and the UFC veterans attempted sweeps, but Green should be able to maintain control and do enough damage to sway the judges in his favor.

After some late shuffles to the lineup, Absolute Championship Berkut 15 is set. One of the event’s top prospects, Anatoly Tokov was originally scheduled to fight Adam Zajac. Instead, Tokov receives a slightly more experienced alternative in Maxim Shvets. The middleweights lock horns on a Russian card that features quite a few prospects alongside the likes of Thiago Meller and Joe Doerksen.

Tokov has been fighting professionally since 2009 and has compiled an 18-1 mark. With such an impressive mark, it’s a surprise Bellator and the UFC haven’t snatched up the Russian prospect. Instead, the 25-year-old has toiled through a series of Russian promotions, including several stops under the M-1 Global banner and a win on the second season of the company’s M-1 Fighter reality series. He has stopped 10 opponents with strikes and four via submission. His only loss came in 2011 via a 67-second knockout.

Shvets debuted in 2011 and has 10 fights, including nine wins, under his belt. The 21-year-old Ukrainian suffered a submission loss in his sophomore outings, but he’s now riding an eight-fight winning streak, just three shy of Tokov’s lofty 11-fight streak. Shvets does have three wins by some form of knockout and one by way of submission, but he tends to rely more heavily on the judges, who have awarded him with five victories.

Shvets has the ability to take down opponents and control them on the mat, but he’s fighting a master of sports in hand-to-hand combat. Tokov has been touted as top prospect who has athleticism and strength on his side, but who lacks the skills necessary to carry him to the next level. He’s knocked out plenty of opponents, but he tends to be more headhunter than technical striker. He’s still developing, however, and he should carry the strength to give Shvets issues in taking him to the mat. Tokov may give up a few inches in height, but he will certainly hold an edge on the feet thanks to his power.

With 19 fights under his belt, including plenty of appearances in M-1 Global, Tokov also holds an experience edge. He has fought the better competition, and he should be able use his wealth of knowledge in this contest against Shvets. If Shvets can score takedowns and land on top, he has a chance to steal the decision. However, he’ll have to last three rounds with a top prospect and not succumb to a knockout. Don’t count on that happening. Tokov will put an end to his counterpart’s night with a TKO finish.

This week’s action is heavy on Russian up-and-comers. While ACB goes down in Nalchik, Russia, the Fight Nights promotion heads to Moscow for its latest venture. Murad Machaev, at 16-1, and Oleg Borisov, at 13-1, are fighters to keep an eye on, but undefeated welterweight Marif Piraev is the prospect with the toughest test in front of him. The 23-year-old meets 24-fight veteran Kirill Sukhomlinov.

Piraev made his pro debut in 2011 with the Fight Nights promotion and has remained perfect through 12 fights, posting 11 wins and a draw. The “Lion of Dagestan,” who trains alongside the likes of Vitaly Minakov, Ali Bagautinov and Gasan Umalatov, has a background in boxing and sambo. He has displayed solid striking to accompany a ground game that has led to seven submission victories. The young fighter is still developing and only recently graduated from fighting inexperienced, mediocre competition to fighting fellow prospects. His first test came against Benjamin Brinsa, who was briefly under contract with the UFC before the promotion realized that it might have a Neo-Nazi hooligan on its hands. Piraev needed less than two and a half minutes to hand Brinsa, who was undefeated through 13 fights at the time, a triangle choke-submission loss. His next fight, against Luiz Cado Simon, ended in a draw, but Piraev returned with three more wins, all in the first round. Those victories came against a mixed bag of competition, however.

Sukhomlinov has been plying his trade as a professional since 2007. He has 19 wins and just five losses to show for his efforts. The 27-year-old is a submission specialist who likes to hunt for armbars and chokes. He is coming off a loss and sits at just 2-2 through his last four fights. Sukhomlinov has only fought once a year since 2013, and this will mark his first fight of 2015.

Sukhomlinov has played spoiler to grappling-heavy prospects in the past, so Piraev isn’t looking at an easy win. Yet, the 23-year-old’s recent streak of first-round submission finishes is reassuring. Sukhomlinov had gone 23 fights without ever succumbing to a submission, but he’s emerging from a triangle-choke defeat in his most recent outing against Oleg Bagov. Perhaps the grappler is losing his edge on the mat, in which case Piraev could take advantage and score the finish.

Piraev’s biggest weakness might be his willingness to sacrifice position and even fight off his back in hopes of attacking with submissions. That won’t help him against a fellow grappler like Sukhomlinov. Piraev is going to have to maintain top position and play it conservative when he attacks with armbars. If he loses position, he could find himself on the receiving end of the submission.

Sukhomlinov’s experience will come in handy, but Piraev appears to be the real deal. Sukhomlinov has played the gatekeeper role for other prospects, coming up short against the likes of David Khatchatryan on two occasions. He’s in a similar position here. There might be plenty of entertaining scrambles and reversals, but Piraev should maintain the upper hand. “Piranha” might not be able to finish the fight in the first round — or at all, for that matter — but if he can’t stop Sukhomlinov, Piraev will still do enough to walk away with the judges’ nod.