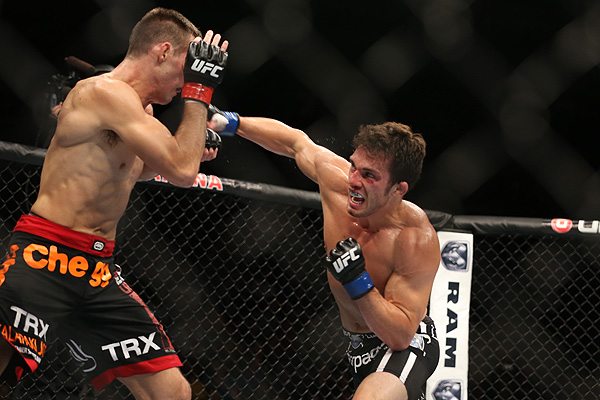 UFC 180: Jake Ellenberger vs. Kelvin Gastelum Is a Make or Break Fight

Although the UFC 180 lineup has seen better days, the lineup for the Nov. 15 card still features a number of marketable fights. Outside of the title clash that headlines the event in Mexico, the evening also features a pivotal welterweight showdown between Jake Ellenberger and Kelvin Gastelum that fits the description of a “make or break” fight.

Gastelum has become one of the more popular prospects in the UFC since his time on The Ultimate Fighter. Given close to zero chance of taking out Uriah Hall—a man tapped as “the next Anderson Silva”—Gastelum showed why fights are won inside the cage, not on paper. Since his win over Hall, Gastelum has found his hand raised each time he’s stepped into the Octagon. But there have been plenty of question marks along the way. He ran through Brain Melancon in his welterweight debut, but then he squared off against the man who always seems to find a way to derail hype trains, Rick Story. Seemingly a terrible match-up for nearly everyone he’s faced, Story weathered an early storm to nearly take the fight away from Gastelum. Despite facing stiff competition, Gastelum’s improved MMA game continued to shine through.

It would be Gastelum’s turn to rebound late in a fight after he initially struggled with Nico Musoke in June. Musoke was able to land two out of his three takedown attempts, but Gastelum turned up the pace in the second and third rounds to take a unanimous decision win. The fight was mired in early controversy, though, when Gastelum missed weight.

Now, in the biggest fight of his career, Gastelum cannot afford to have a similar mishap. Guys who can’t beat the scales rarely last long enough to strap on the four-ounce gloves in the UFC. But most fans are willing to give Gastelum a pass on the weight mishap since he doesn’t have a history of missing weight.

If he is smart, Gastelum has focused his camp on taking advantage of Ellenberger’s mistakes. There may not be another golden opportunity for Gastelum to rise from prospect to contender. Ellenberger has looked like anything but “The Juggernaut” that UFC fans had grown accustomed to on his rise to the top. He’s on a two-fight losing streak and has appeared completely lost inside the Octagon.

Against Rory MacDonald, Ellenberger was afraid to pull the trigger and lost out on the chance for a future title shot. His next fight came against No. 1 contender Robbie Lawler. The fight with Lawler showed just how far Ellenberger had fallen from being a top contender, as he was simply blown out of the water over the course of three rounds before finally being finished.

Whereas Gastelum faces a huge opportunity, Ellenberger is faced with being on the brink of irrelevance. A loss to a prospect, no matter how hyped the prospect may be, would almost certainly send Ellenberger out of the UFC rankings and possibly out of the promotion entirely. Rarely do fighters on three-fight losing streaks get another chance in the UFC. Compounding the issue is the manner in which Ellenberger lost to MacDonald and Lawler. Quite frankly, Ellenberger’s fighting career hinges on his UFC 180 showdown with the surging Gastelum.

Yet, despite the two dreadful showings, Ellenberger is still ranked at No. 8 in the official UFC rankings. If there was a time for Gastelum to take advantage of fighting a guy ranked inside the top 10, this would be it. Ellenberger appears to be on the downslope of his career and hasn’t looked like a top-10 welterweight in quite some time. However, Ellenberger is a known fighter who is highly ranked despite recent struggles, which makes the match-up very appealing for someone like Gastelum.

Gastelum has shown improvement since his TUF days but will need to bring his best to take out a guy who can end a fight with a single strike. If Gastelum loses, he’ll be sent back down the pecking order. Worse yet, losing to a guy who hasn’t looked great in his most recent fights isn’t exactly the best way to build a resume in the Octagon.

Gastelum is still young enough to build up another chance at becoming a contender, but a loss to Ellenberger would set him back quite a few fights. There may never be another chance for Gastelum to face a fighter that’s still highly ranked but struggling the way Ellenberger has recently. At the same time, Ellenberger may not get another chance to earn a paycheck in the Octagon if he cannot stop the Gastelum hype train at UFC 180. The card doesn’t have as many marquee names in the lineup as it once did, but it still features fights that have a lot on the line. The match-up between Ellenberger and Gastelum might be the most important of all.