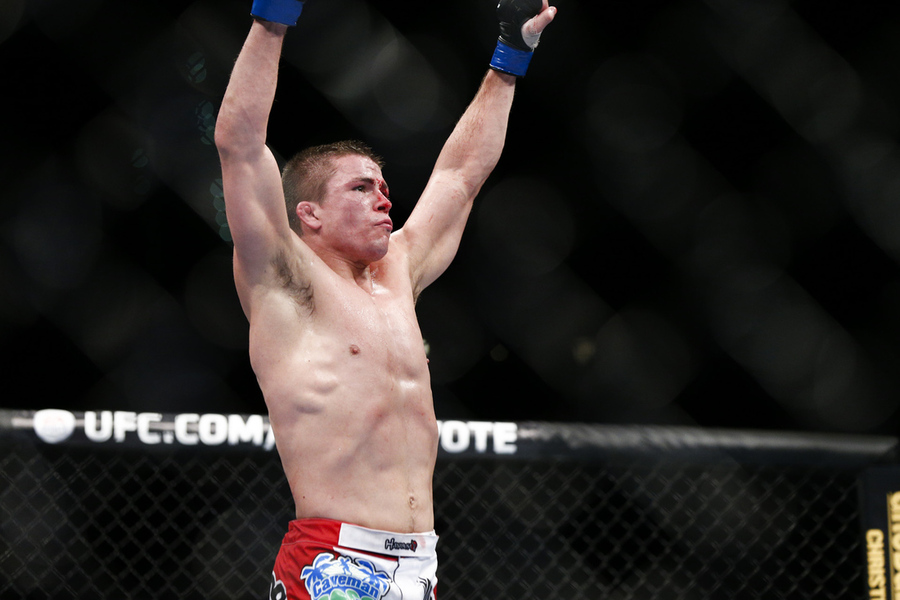 Rick Story derailed the hype train of Iceland’s Gunnar Nelson, scoring a five-round split decision win. Nelson scored with three straight right hands early. Story initiated the clinch, but it was Nelson that landed a trip takedown. Story returned to his feet and began to land inside leg kicks, including one that stumbled Nelson. In round two Story continued to find a home for his leg kicks and started landing to the body of Nelson. Nelson threw a spinning kick, but Story caught it and dumped him to the mat. Nelson delivered a strong right hand late, but Story marched forward undeterred. Round three was very similar to the second frame as Nelson found a home for his right straight and Story fired back with his left hand. Nelson earned a brief takedown, but Story returned to standing quickly. Story finished the round with more shots to the body. Story dropped Nelson in round four with a big left hand. Story flurried for a finish on the ground, but ultimately let Nelson return to his feet. Nelson’s paced slowed considerably from Story’s pace. The fifth round was still competitive, but Story’s work to Nelson’s body was the difference as two of the three judges rewarded his efforts on the scorecards.

Featherweight Max Holloway picked up his fourth win of 2014 with a devastating finish of Sweden’s Akira Corassani. Corassani scored with multiple overhand rights, but Holloway remained patient. As the opening stanza continued, Holloway found his opening. He rocked the Swede with a straight right hand and looked for the finish. Corassani looked to clinch, but Holloway separated and landed a knee. He followed with another right hand that put Corassani out for good against the cage.

Former KSW title holder Jan Blachowicz made a big statement in his UFC debut, crushing Sweden’s Ilir Latifi by TKO. The fighters looked to feel one another out on the feet early until Blachowicz connected with a big liver kick that hurt Latifi. The Polish fighter smelled blood and flurried for the finish.

English featherweight Mike Wilkinson spoiled the perfect record of Sweden’s Niklas Backstrom with a violent, first-round knockout. Backstrom looked to use his size and reach early on, keeping Wilkinson at range with kicks. Backstrom scored with a push kick to Wilkinson’s face as he came forward, but Wilkinson landed a counter right hand that sent an unconscious Backstrom crashing to the mat.

Sweden’s Magnus Cedenblad outworked Scott Askham and claimed a decision win in his homeland. Askham looked for a head kick early and clipped Cedenblad with a heavy counter shot that forced Cedenblad to shoot for a takedown. The Swede brought the fight to the ground and he kept Askham pinned to the mat for the rest of the frame. Cedenblad again took Askham to the mat in round two. After a lull in the action, the referee brought the fight back to standing and Askham dropped Cedenblad with a massive front kick to the face. Cedenblad managed to survive the round. Cedenblad flurried to start round three and dragged Askham to the ground. Askham couldn’t get back to his feet and it cost him the fight.

Swedish welterweight Nico Musoke scored a clean sweep on the scorecards in a lackluster fight against Alexander Yakovlev. Both fighters struggled to find their rhythm, but Musoke pushed the pace and spent nearly half the fight in control in the clinch. Yakovlev scored with more volume, but he was constantly defending Musoke’s control.

Featherweight Dennis Siver returned from suspension to earn a hard-fought decision win over last-minute opponent Charles Rosa. Rosa showed no Octagon jitters despite taking the fight on short notice. Siver scored with a takedown and threatened with arm-triangle choke, but Rosa defended well and transitioned to a kneebar of his own. In the second round, the fighters traded positions on the mat with regularity, with Siver spending most of the round on top. It was more of the same in the final round as each fighter scored with sweeps, but Siver was simply too much and took the win.

In a tough, grinding affair, Ireland’s Cathal Pendred made a successful return to the welterweight division, edging Gasan Umalatov by split decision. Pendred was the aggressor early, trying to bring the fight to the mat. Umalatov stayed on his feet, but could not get his offense going. In round two Umalatov found his timing and was able to drop Pendred with a big counter right hand. The third round was sluggish, but Pendred’s forward advance was enough to convince two of the three judges to score the fight in his favor.

Poland’s Krzysztof Jotko spoiled the night for Sweden’s Tor Troeng with a dominant decision win. Troeng worked hard for takedowns from the opening bell, but Jotko showcased superb takedown defense to keep the fight upright. Jotko scored with repeated elbows from the clinch throughout the fight. Troeng’s pace slowed significantly as the fight wore on and Jotko cruised to victory.

Mairbek Taisumov demolished Poland’s Marcin Bandel in only a minute, scoring a violent TKO. Bandel came forward recklessly to try and close the distance, but Taisumov delivered a massive right hand that sent Bandel crashing to the mat. Taisumov followed with heavy shots and the referee quickly intervened.

Featherweight Zubaira Tukhugov earned his second straight UFC win by battering Ernest Chavez and earning a first-round TKO. Both fighters started slowly, but as the round progressed Tukhugov began connecting with combinations. He rocked Chavez late in the round and flurried for the stoppage.