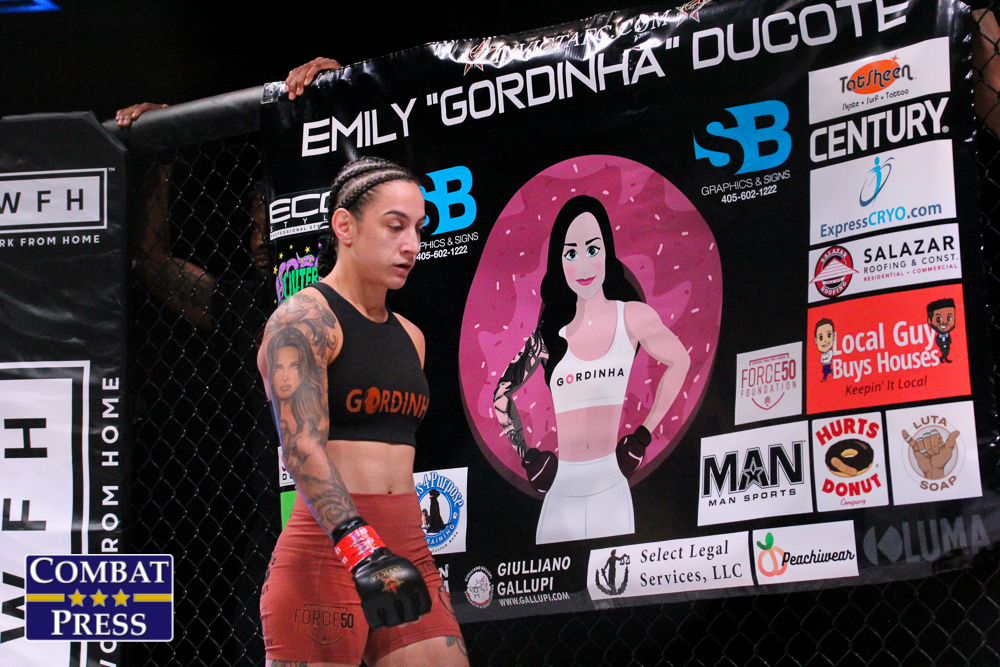 Invicta FC 47’s Emily Ducote: ‘One Step at a Time’

While 2022 has, thus far, felt closest to a return to normal since the COVID-19 pandemic hit, some of the memories are still in the rearview mirror. But things have definitely changed, and change isn’t always a bad thing.

Professional mixed martial artist Emily “Gordinha” Ducote entered 2019 after a two-year run in Bellator that ended on a rocky note. The American Top Team OKC standout was 6-2 as a pro, and 4-2 in Bellator, when she was set up for a vacant flyweight title shot in Nov. 2017. She had spent most of her career in the 125-pound division, and it was a rematch with Ilima-Lei Macfarlane. She lost the fight via fifth-round armbar, and would go on to drop two decisions in a row the following year. After being released from the promotion, 2019 was set to be a year of revival.

The first move Ducote made, after dropping three flyweight fights in a row, was to move back down to strawweight, where she began her pro career. In Feb. 2019, she choked out Kathryn Paprocki. She was subsequently signed to Invicta FC, and then took out Janaisa Morandin with a first-round TKO in August. Three months later she dropped a closely contested split decision to Kanako Murata for the vacant strawweight belt, before she, and the rest of the world, went into a holding pattern in early 2020. By July 2020, Invicta FC was back in action, and Ducote came out with a victory over Juliana Lima. It would be over a year before she saw the inside of the cage again.

“COVID hit, and so I wasn’t able to be nearly as active, and I had several fight cancellations, which messed up my activity level,” Ducote told Combat Press. “As far as training, I did everything normal that I normally do. My coach knows Brazilians around the United States, and we linked up with one of his friends, Daniel Mendez, who trains a bunch of fighters in Florida. I was able to train with him a few times in between some of those fight cancellations and stuff.”

After the Lima fight, Ducote was thrown back-to-back cancellations. And, both of them were due to circumstances out of her control. The hits just kept piling up.

“So, after I fought Juiana Lima, I was scheduled to fight [Monserrat] ‘Conejo’ [Ruiz] for the belt, and I got there in fight week in Kansas City, and one of my coaches had tested positive [for COVID],” explained Ducote. “I tested negative, so we were trying to keep the fight going, and I cut all the weight, made weight, and the commission decided that day to cancel it. That was just a big bummer, and it took me a lot of time to bounce back from that. Just mentally, that was a lot of work, you know, preparing for a title fight and then getting it cancelled day of weigh-ins. So, that happened, and then I was supposed to fight Liz Tracy. A week out, something happened with her, and she wasn’t able to fight, so that got cancelled.”

The Tracy fight was supposed to happen in May 2021, and, at that point, Ducote was already coming up on a year since her last fight. Fortunately, she was able to get a contract to take on Danielle Taylor in Aug. 2021 for the vacant Invicta FC strawweight title.

“I just feel like I had a really long camp, and I just was really ready to get back in and fight,” said Ducote. “I was also able to go and train with, you know, Hannah Goldy, and I went out and trained with Mallory [Martin], before she came out to train with me. I have a few girls that I will go and train with, or they’ll come and train with me. So, I had a really solid camp, and I was just ready to fight. It was a long time coming. The cancellations were just super frustrating for me, and I just really wanted to get back in the cage and everything worked out as perfect as can be in that fight.”

At Invicta FC 44, Ducote absolutely smoked Taylor with a right cross followed by a head kick near the midpoint of the first round in their headline battle. It was one of the highlights of her career, and an amazing victory for the then-27-year-old brawler.

“I’m really happy with the fact that I was able to get a finish to take the belt home,” said Ducote. “You know, it was my third opportunity to fight for a belt in a major organization. And, I finally was able to take it home. [I was able] to get a finish to make it more, you know, dominant than a decision [with] no risk of judges or anything. I was so excited about it. I was super happy with that fight, and that finish, and really happy to be able to bring that belt home.”

Tomorrow night, at Invicta FC 47, the champ will be back in action for her first title defense. Standing across the cage will be former Invicta FC atomweight champ, Alesha Zappitella, who fights out of Michigan and lost her title in January, when she was dominated by Jessica Delboni for five rounds. Having both been in Invicta for the last couple years, Ducote is very familiar with her opponent.

“I’ve seen her fight,” said the Oklahoma-based fighter. “Obviously, I watch pretty much all the girls in Invicta, UFC, LFA, etcetera. So, I just like to watch everybody. I’m usually pretty aware whenever they send out a name. I’m usually pretty aware of who it is and what their style is. So obviously she has a good wrestling style. However, she’s coming up from 105 [pounds], so she is a little bit smaller than some of these [115-pound fighters] which, you know, it’s not a big deal that she’s a little shorter. That’s pretty much it. She’s fought several, several times in Invicta, so she’s a very familiar face there, and I’m excited about it.”

Zappitella, who carries the moniker “Half Pint” is four-feet-eleven inches tall, so she will be giving up three inches to the champ. She has been in Invicta since 2018, is 9-3 as a pro, and has only a couple finishes under her belt, having gone the distance in most of her outings. However, she has fought up in weight a couple times, just not in the last few years. Ducote enjoys the size advantage, but it is somewhat indifferent as to who her actual first title defense is against.

“I don’t really pick opponents,” said Ducote. “And, I don’t like to think about all the options, because if you sit there, there are so many potential fights that you could make. So I’d like to just be realistic, and, whenever [Invicta FC President and CEO] Shannon [Knapp] gives you the name and gives you the contract, that is who I’m fighting. So, she sent out the name, sent out the contract. Obviously, I’ve seen her last couple fights. I know she’s moving up. I’m not picky with opponents. I really don’t care who it is, or who it was, or who it could have been. Zappitella is the one I’m fighting, and I’m fully invested and prepared for it. I’m looking forward to fighting her.

“The last couple opponents I fought, I had a one- or two-inch advantage, which is nice. Because, in the beginning of my career, I was always the shorter person. So, I’ve been enjoying fighting people my size. Obviously, in the beginning of my career, I was at 125 [pounds], which is just not my weight class. 115 is a much better fit, and I’m much better there. And I do like that everyone is more sizable, and it’s not such a big height differential. I’m excited that we’re similar size, and she’s a couple inches shorter, but it’s definitely better than fighting somebody way taller.”

A lot has changed for Ducote since parting ways with Bellator. She has found success in the strawweight division, has gotten better at her craft by cross-training under Mendes, and she doesn’t feel the pressure to keep her spot in that promotion. With a square head on her shoulders, she looks to defend her title for the first time tomorrow night, and regardless of what the future holds, she plans to stay the course.

“I just need to take it one step at a time,” said Gordinha. “If an opportunity came up, I would definitely do it. But it’s important for me to just be where I am. Right now, I’m with Invicta, and I’m defending my belt. Down the line, I do hope that UFC, Bellator, even ONE Championship – that’s a whole different world – but I’m not opposed to any of those things. I also wouldn’t mind going back into Bellator at 115, not at 125. I’m not moving back up. 115 is the weight I need to be competing at. So, I say any opportunity from any of those organizations is definitely something I would look at, but, for now, I’m happy fighting for Shannon and happy and looking forward to defending my belt with them.”