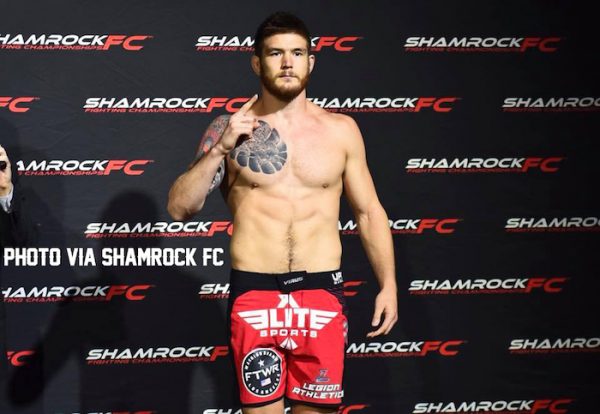 The fight game can be finicky. One of the worst aspects for the fighters themselves is the high level of uncertainty.

Just recently, the UFC yanked the women’s flyweight title from Nicco Montaño for her last-second withdrawal from a fight with Valentina Shevchenko. Then, the promotion announced Shevchenko would face former strawweight champ Joanna Jędrzejczyk, but then it announced the Russian’s next opponent would actually be Sijara Eubanks. Finally, the promotion flip-flopped back to Jędrzejczyk. If that statement sounded confusing, it should. This is the nature of the game. However, sometimes it’s the curveballs that make the athletes get better.

Johnny Eblen was a wrestler at the famed University of Missouri program for five years. In the collegiate wrestling world, the tournament format guarantees a level of uncertainty about who someone will face. The tournament is a bracket, though, and it can be easy to have some idea of who’s up next. However, since Eblen has transitioned to MMA, there has been an even higher level of uncertainty.

After going 3-0 as an amateur, Eblen turned pro and joined Shamrock FC. He has not had a single originally scheduled opponent show up on fight night. After getting three fights under his belt, Eblen doesn’t view this as that big of a deal. He’s getting better with every fight, too. Yet, the frustration got pretty bad as his last bout approached at Shamrock FC 308 in August.

“It kind of sucked, because they had a bunch of opponent switches and a bunch of different style change-ups,” Eblen told Combat Press. “I first was supposed to fight a veteran who was a striker/jiu-jitsu guy. Then, I got another jiu-jitsu guy, but he was a little shorter and didn’t have great striking. But then, the week of the fight, they changed the opponent again — I guess both of my opponents got hurt.

“I ended up getting Wayman Carter, who was 6[-foot-]4 with an 81-inch reach. I really wanted to showcase my striking that fight, but it was not my best bet to stand and strike with this guy. I ended up just taking him down. I saw an opportunity, and I choked him out. It kind of sucked, because there was so many opponent changes. It’s hard to game-plan when the opponent is getting changed every other week.”

Eblen does have the all-important wrestling base, though, and it has proven to be one of the best backgrounds to bring into an MMA career. The Mizzou program produced champions Ben Askren, Tyron Woodley and Michael Chandler, and Eblen is following in their footsteps.

“I ended up moving down to Florida and taking a job at a paving company,” Eblen said. “I got a job through my head coach, Brian Smith, at Missouri. I worked there for a year, and, while I was down here, I ended up meeting Steve Mocco, because I was coaching technical wrestling and he’s mixed in with the high school wrestling and [American Top Team]. He kind of got me coming into the gym, and, next thing I know, I’m coming every day.”

Mocco was a very successful wrestler in his own right, and he went 5-1 in his short stint as an MMA fighter. Now a wrestling coach at ATT, he has done great things for the program. In addition to Mocco, Eblen also made a great connection with a fellow ATT fighter who happened to have roots in the Midwest.

“I met L.C. Davis at American Top Team,” Eblen explained. “I’m from Kansas City, and he’s from my same hometown. Any time I came back to Kansas City, I trained with L.C. He got me in touch with Shamrock. He’s a really good guy. He’s really helped out my career. He found me my manager, and he’s done a lot.”

With a solid wrestling base and some of the best wrestling coaches in the game, the focus for Eblen has obviously been his striking. At ATT, there are plenty of good strikers to choose as training partners, too.

“I can take people down, I can keep them down, I have some pretty mean ground-and-pound, and my stand-up is coming along just fine,” Eblen said. “It’s the main focus that I’ve been working on. I can kind of sit back and not worry so much about grappling. When I first started fighting, I worried a lot about jiu-jitsu and stuff. I made sure I could pick it up. Once I got the hang of it, then I really, really focused on my striking a lot. I feel like it’s the next thing I need to learn.”

Eblen’s next outing comes on Saturday night at Shamrock FC 310 in his hometown of Kansas City, Mo. Eblen is set to headline the card against Oklahoma’s Tyler Lee.

“I know he’s a 3-1 middleweight, and he has a purple belt in something — I think jiu-jitsu,” said the wrestler. “He has three submission wins, but one submission loss, so he’s definitely beatable. He’s been fighting for [Legacy Fighting Alliance], so I think it’s a good next step for me.”

After dropping his first pro fight, Lee has won three in a row, all in the first round. He’s actually now a brown belt in BJJ. He’s also a former NAGA champ and teaches jiu-jitsu at HTC918, which is owned by MMA veteran Gerald Harris. None of this matters much to the former NCAA Division I wrestler Eblen.

“I have three professional fights — all first-round finishes — and I just plan to keep adding to my resume until I sign a UFC contract or a Bellator contract,” Eblen said. “Once I’m in the UFC or Bellator, I plan on doing the same thing — finishing guys in the first or second round in violent fashion.”

Eblen has all the tools to make it to the big show, too. On Saturday night, he will finally get a chance to fight an originally booked opponent. One thing’s for certain: he will be looking for a dominant finish.

Eblen would like to thank all of his coaches and training partners at American Top Team and Glory MMA and Fitness, including Mike Brown, Steve Mocco, Din Thomas, Steve Bruno, L.C. Davis and James Krause. He would also like to thank his managers and sponsors: Upgrade Management Group, Legion Athletics, Elite Sports Company, Fit Warrior Brand and Reflex Combat. Follow Johnny on Twitter: @JohnnyEblen
Advertisement