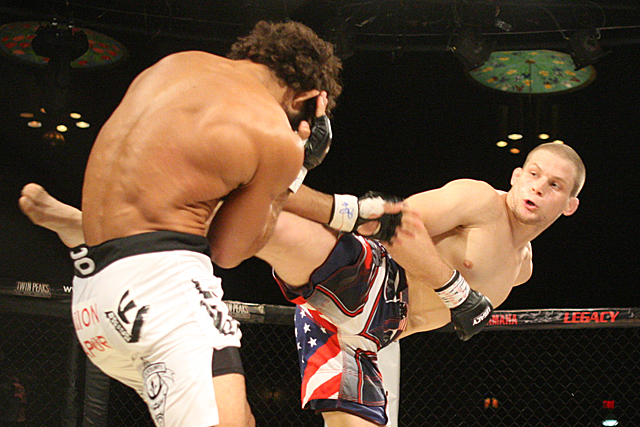 UFC Vegas 44’s Alex Morono: Anyone is the Right Opponent

What if someone said one of the hottest prospects in the UFC is an unranked welterweight with 12 finishes in 20 career victories, a second-degree black belt in Brazilian jiu-jitsu, a super crisp striking game, a couple performance bonuses, and 14 Octagon appearances in the last six years? Well, for one thing, one might say he’s not a prospect at all, which he is not. A follow-up question might be, why is this guy not ranked? To push that question even further, he’s undefeated this year, after knocking out Donald “Cowboy” Cerrone in May and following it up with a decisive win over Davd Zawada in September.

Houston native Alex Morono is that guy. After bouncing around Texas and Louisiana for the first five years of his pro career, he picked up a Legacy Fighting Championship title, which vaulted him into the UFC in Jan. 2016. Since then, he has gone 9-4-1 in the big show, and he has finished veterans Zak Ottow and Josh Burkman, in addition to Cerrone. Since joining the UFC, he has only been stopped once. So, again, how is he not ranked? Frankly, Morono doesn’t even care.

Morono owns Gracie Barra The Woodlands in his hometown, but he also trains under Sayif Saud at Fortis MMA in Dallas. With 28 pro fights under his belt, he is still only 31 years old, and has a lot of fight left in him. He attributes a lot of that to avoiding unnecessary damage.

“I have a Jim Miller-style goal for the UFC,” Morono said. “I want 30 to 40 fights. I don’t want to race my way to the top of the division and fight nothing but buzzsaws and go through that arduous journey. I’d rather have fun, and just take one step forward at a time.”

Morono kicked off 2021 by opening a new 7000-square-foot, state-of-the-art facility for his academy. It’s been so successful this year, that he’s already having occupancy issues, which is great problem for a small business owner to have. Between that and the success of his fight career, it’s hard to believe that he closed out 2020 with a loss to Anthony Pettis. However, he has no regrets in the way that year ended.

“For the Pettis fight, I was by all means confident and everything, but I didn’t know,” Morono admitted. “I’m always like, ‘This guy was the champ. Is he that good?’ But, after going 15 minutes with him – other than dealing with that wheel kick, there wasn’t anything too daunting – I knew I could beat these guys.

“So, going into the Cowboy fight, I was certain I could beat him. And, the Zawada fight was funny. I was actually at like a little brunch spot with my wife. I got a club sandwich. I had just sat down at the table, and I got a call from my coach. I already knew what it was, because he doesn’t just randomly call me. He was like, ‘Hey, we got an offer to fight in December, but they asked if we wanted this fight on short notice.’ I’m not the coach, and I was feeling good, so I took the Zawada fight.”

The BJJ black belt is always training and always staying in shape. He is the consummate professional. Between Fortis and GBTW, he always has students and teammates preparing for fights, and he’s always training alongside them. Pairing that with his Octagon experience, he is the type of guy that everyone loves to have in there, the promotion and fans alike. In fact, even when he is in camp for a fight, he’s not one of these guys that needs to go hard for 10 or 12 weeks to get ready. Always being ready pays huge dividends and makes life a lot easier.

“It’s the perfect symbiotic relationship,” Morono explained. “At the beginning of week, I will drive up to Dallas, and do my real hard training there. I’ll come home, and take Wednesday off, just to recover. The last half of the week, I’ll get together with my striking coach, and go over some things I do well, some things I got hit with and refine it. I’ll hit pads and do drills. I do the same thing on the jiu-jitsu front. I’ll just rinse and repeat that process. I just refine and refine and refine every week. I usually do a six-week camp, so I do five rotations, and the sixth week is fight week. It works out so well.”

The UFC has been very busy lately, holding events almost every week. So, when the December schedule was coming out, Morono drew Mickey Gall as his next opponent. The two will square off tomorrow night at UFC Fight Night: Font vs. Aldo at the UFC Apex in Las Vegas.

Gall first gained notoriety when he welcomed pro wrestler CM Punk to the MMA world. It was Gall’s third pro fight and his second in the UFC. In six years as a pro, he has compiled a 7-3 pro record, and he hasn’t really beat any high-level competition. He may not exactly be a top-tier opponent for Morono, but like the Texan said, he’s getting paid the same either way.

“He’s got a following,” said Morono. “He looked sharp in his last fight. Granted, that Jordan Williams guy has not done good in the UFC at all. But, I mean, Mickey is one of those guys, that, if you don’t take him seriously, he’ll surprise you. So, I’m not overlooking him. I never overlook a guy like that. The easiest way to lose a fight is to think you’ve got it in the bag before the fight goes down. Not that his back’s against the wall, but I know I’m one of the more challenging, if not the most challenging, match-ups he’s been given. When somebody knows they have a fight on their hands, they’re going to train very hard. He is young, and I know he’s going to be prepared. In terms of difficulty, I don’t see this as an easy fight.

“In terms of, like, him being the right opponent; anyone on the roster is the right opponent for me. I don’t care about rankings. Dude, I just want to step into the Octagon, scrap it out something ugly, and get paid for it. Anyone who signs the line on that contract is my right opponent.”

And, for Morono, he has no complaints about his pay. Going into this fight, he was renegotiating his contract with the UFC. Instead of coming at them with what he wanted, he let them make their offer first. They came in higher on both show and win pay than what he was asking for, so he is very happy with where he is at currently.

“They’re doing right by me,”” Morono said. “I’m fighting a guy who’s not even ranked, and I’m getting paid ranked-guy money. I’m happy to fight whoever they want me to fight for what they’re paying me.”

The thing about Morono is that he does not like to put on boring fights. Every time he comes out, he puts on a show, win or lose. And, when looking at the top-ranked guys in the welterweight division, he does have his opinions about the potential for fun match-ups.

“The only bad thing about the top welterweights is that there are a lot of grappler-wrestlers,” Morono elaborated. “Which is cool, but it doesn’t make for a lot of exciting fights. Let’s compare it to the lightweights. You have [Charles] Oliveira, who’s a bomb grappler, but he’s not a wrestler. He’s a submission artist. Then, you have [Dustin] Poirier, who I believe will be the champion. Then, you have [Justin] Gaethje. You have [Michael] Chandler. And, honestly, we’ve got [Conor] McGregor. Say what you want about him, but he’s got some power in his hands, and he doesn’t have boring fights. That’s a fun, fun, volatile, explosive division. I think the welterweight top-10 is stylistically less appealing.”

Now, Morono is not suggesting that he would move down to 155 pounds just for exciting match-ups. He simply means that, without a ton of exciting styles in the upper end of the welterweight rankings, for the same amount money, he will pretty much fight whoever the promotion gives him, ranked or not.

In addition to his fighting career, Morono is a busy man. He is married with two stepkids, he has a dog, and, of course, he has a business to run. So, he doesn’t have a ton of free time, nor does he want it. However, he did order his wife Janice a nice present recently.

“I love teaching, man,” Morono said. “I’ve been teaching the jiu-jitsu class. I assist with the Muay Thai and the MMA. That’s all I do. That’s all I do, because that’s all I want to do. I have an awesome family. My wife’s awesome. She’s like a financial wizard, so she’s always looking for good investments. I told her if I got a bonus for fighting Cowboy, I’d buy her a Corvette. We just put in the specs for the build, so that will be here in a couple of months. Life’s good. I’m a pretty simple man. As long as I have a gym and gear, I’ll be happy.”

Morono leads an all-around awesome life. He has a great business, a successful fighting career, and a happy family. Does he want to be in the limelight? Not really. He’s never been a big self-promoter, but come Saturday night, fans will want to tune into UFC Vegas 44, as he enters the cage again with the intent of extending his winning streak to three. Will a win put him in the rankings? Nobody really knows. But, one thing is for sure, Morono will be content either way, and will continue to seek success as he enters 2022.

UFC Vegas 44 airs in its entirety live on both ESPN+ and ESPN starting at 7 p.m. ET on Saturday, Dec. 4.