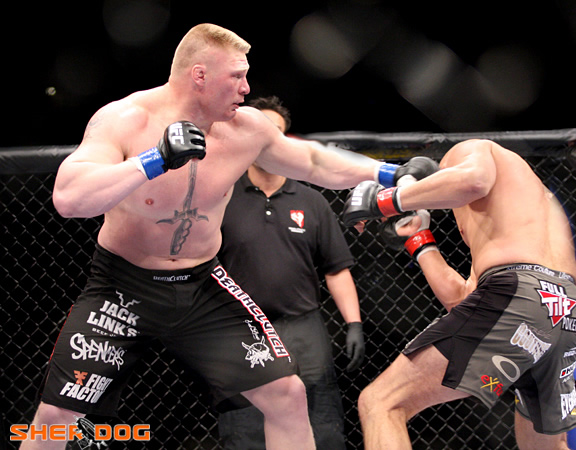 The sports of mixed martial arts and pro wrestling are very different, but do the athletes train in similar ways?

MMA and pro wrestling have become more closely linked over the last 10 years, as some MMA fighters have started to move over to organizations like the WWE after they have retired. There have also have also been some pro wrestling stars from the WWE who moved over to MMA to test their fighting prowess. The most famous of them including guys like Brock Lesnar and C.M. Punk.

The overlap between the two sports has many people asking how similar they actually are. Let’s walk through the similarities and differences between pro wrestling and MMA. Check out MMA betting odds for accurate predictions and secure payouts for this weekend’s upcoming bouts.

The fighting styles used in MMA include, but are not limited to, wrestling, Brazilian jiu-jitsu, kickboxing, boxing, Muay Thai, and karate. The ancient sport of pankration became modernized into MMA in the late 20th century, gaining popularity in the mid-90’s. Today, there are many professional MMA promotions all over the world with the most popular being the UFC.

The premier pro wrestling promotion is the WWE, and it is one of the biggest sporting organizations in the world. They have over 200 wrestlers working for them across their five worldwide companies.

The WWE is more of an entertainment company than a sports league, but pretty much all pro sports are in the entertainment business anyway. It is seemingly common knowledge that the results of the matches are preplanned, and the company comes up with the fighters’ storylines.

While the results in professional wrestling are likely preplanned, the components of the fights generally are not. This is why some MMA fighters are able to compete in pro wrestling, as they have both fighting skills and acting skills. In fact, some pro wrestling injuries are even real, while others fake. and, while the outcomes are generally planned, some pro wrestlers even punch for real to make the fights more authentic. Although, this is generally discouraged, so that the fighters don’t sustain too many permanent injuries. There are also accidents that happen in the ring that lead to injuries.

Obviously, or it may seem, nothing in MMA is planned. These are generally genuine fights in which most fighters have no idea what will unfold. The fighting and injuries are usually quite real in MMA.

Because of the physical requirements of both sports, pro wrestling and MMA do require some similar skillsets. Over the last 30 years, pro wrestling has included many different elements of MMA into their fighting routines. You will see elements of karate, kickboxing, boxing, and wrestling in both sports. Both styles of athletes will typically split their time training between the gym and the cage, mat, or ring. They both require strength and stamina to be able to fight for long periods of time. MMA athletes might have to fight through all 15 or 25 minutes of the scheduled fight if they don’t stop their opponents. But, there is no limit to how long a pro wrestling match can last. The longest match recorded was 81 minutes and was ended by a curfew.