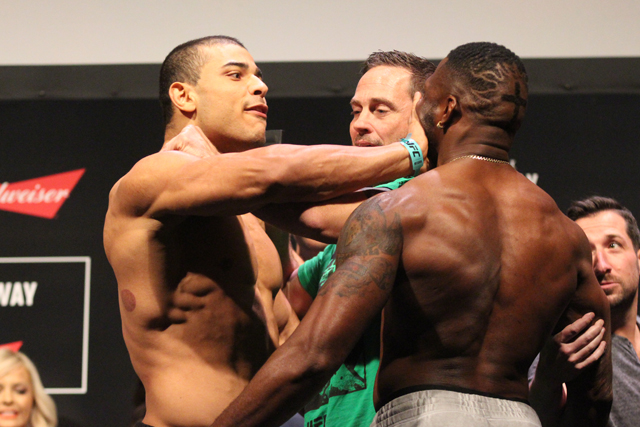 Will Paulo Costa Recover From His Loss to Israel Adesanya?

Paulo Costa faces Marvin Vettori in the main event of this Saturday’s UFC Fight Night 196 card. Costa will be stepping foot in the Octagon for the first time since suffering a second-round TKO loss to Israel Adesanya for the UFC middleweight championship in Sept. 2020.

This fight was the first loss Costa had suffered in his career. He has had a prolonged absence since then, and his career seems to have gone into a downward spiral. Will he be able to recover from this defeat?

Despite all the hype, Adesanya would proceed to deliver a striking masterclass and made the bout look easy. Costa had a bizarre showing, he stood right in front of the champion, but his output was almost non-existent. Adesanya targeted Costa’s legs, throwing a series of powerful kicks, which severely hurt the Brazilian. By the time the second round began, Costa looked like a beaten fighter. Adesanya sensed this and became more aggressive. He got the finish with a hook that connected behind the ear, followed up with some additional shots.

Costa’s behavior in the following days was bizarre and hurt his standing in the MMA community. He strangely attributed his poor performance to drinking a bottle of wine the night before the bout. He claimed that he used the wine as a sleep aid. Unsurprisingly, the Brazilian was derided by the MMA community for this statement.

The way Costa’s career has played out since then has delayed his journey back to the top. He was scheduled to fight Robert Whittaker in April 2021, but pulled out due to an illness. The UFC then announced in June that he would face Jared Cannonier in August. However, almost as soon as this fight was announced, Costa pulled out. He claimed that he had never signed a contract and that he had issues with his pay.

He then agreed to a contest against Marvin Vettori on this weekend’s UFC Fight Night card. Vettori is also coming off a title fight loss to Israel Adesanya. He was not dominated as badly as Costa was, but was still outclassed.

Heading into this fight, Costa finds his reputation in the MMA world at an all-time low. It has been a fall from grace for a man who was a fan favorite and seemed destined to become champion. In spite of this, Costa can still return to title contention with a victory on Saturday.

There are many questions regarding how Costa will perform in this fight. It will be his first contest in over a year, and he will be returning from a devastating loss that deeply affected him.

Vettori appears to be a formidable challenge for Costa to overcome. If the 31-year-old shows up with any self-doubt then he will be defeated. Vettori may not be the most technically skilled opponent, but he is a tough, determined individual who will keep fighting until the very end. Costa will likely be taken to the later rounds and have to overcome adversity, which he is unaccustomed to.

Vettori has a similar front-foot, marauding style to Costa but is not renowned for his finishing ability. He is more of a volume striker who accumulates damage on his opponents, rather than inflicting heavy blows. Costa is seemingly a better technical striker and has more weapons in this aspect. Vettori almost exclusively targets the head with punches, whereas Costa mixes in kicks and is adept at firing powerful kicks to the body.

The key to this bout is likely to be the conditioning of both athletes. Costa will almost certainly try to knock Vettori out early. However, if he fails to do so, he could be in for a long night. The Brazilian has never been past the third round in his career. Furthermore, when he got to this stage against Yoel Romero, he noticeably fatigued. Meanwhile, Vettori has shown that he can sustain a high work rate for 25 minutes. In his contest against Jack Hermansson, he threw 376 strikes, including over 100 each in the final two rounds. That bout is in the record books for the most significant strikes attempted and landed in a UFC middleweight fight.

The Italian is also very durable, he has never been knocked out in 23 professional fights. If he is able to withstand the early pressure from Costa, then he could feasibly turn the tables on his tiring opponent in the way Romero did. If Costa does fatigue, then Vettori’s solid grappling may become crucial. Costa has excellent takedown defense, but this could change if he tires. Vettori knows how to implement a grappling-heavy approach for five rounds. He secured 11 takedowns against Kevin Holland, which is the most any UFC middleweight has landed in a single fight.

Costa has recognized that he needed to make changes to his game after suffering the loss to the champ. He has moved camps and has started training at the Pitbull Brothers gym in Natal, Brazil. This gym is run by former Bellator lightweight and featherweight champion Patricio “Pitbull” Freire and his brother, and fellow Bellator fighter, Patricky Freire. This move suggests that Costa’s refusal to acknowledge that Adesanya was the better fighter may not represent his true feelings.

There have been many fighters who have become a shell of their former selves after they suffered their first loss. Costa will have to find a way to deal with losing his aura of invincibility. It is something that he clearly struggled with in the immediate aftermath. Costa seemed to be an unstoppable force during his rise to UFC title contention. Many believed that he would become the first man to overcome Adesanya in MMA.

If he loses to Vettori this Saturday, he could end up a long distance away from reaching those heights ever again. For a man who had such difficulty admitting he lost to a better fighter, the manner of another potential defeat is even more important. If he is dominated, then his loss to Adesanya may be remembered as one of the most career-changing fights in recent memory.