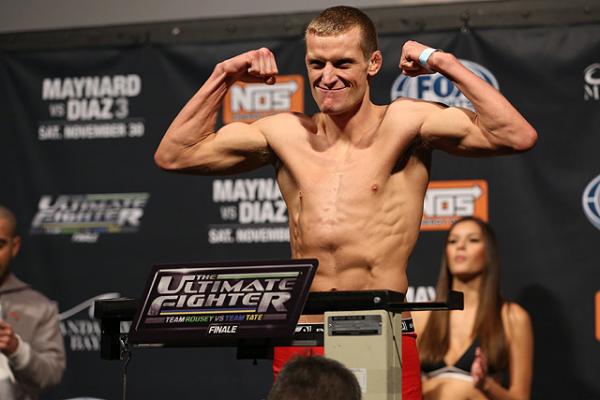 This weekend’s UFC Fight Night: Edwards vs. Muhammad card features three match-ups of Brits against Americans, including the main event between Leon Edwards and Belal Muhammad. However, the trans-Atlantic battle of Davey Grant vs. Jonathan Martinez should not be overlooked. These are two prominent strikers in the bantamweight division, and their fight is a must-see affair.

Grant made his official Octagon debut as a finalist on The Ultimate Fighter 18 Finale in a losing effort to Chris Holdsworth. However, he rebounded from the setback and posted a dominant decision over Ecuadorian sensation Marlon “Chito” Vera in his next fight. All three judges scored the bout 30-26 in favor of the Englishman.

Grant is currently on a two-fight winning streak. He scored a decision victory over Grigorii Popov in Moscow in Popov’s home country of Russia. In his most recent outing, the Brit opened UFC Fight Island at UFC 251 with a third-round knockout of Martin Day. In the back-and-forth contest, Grant was dropped early but rallied to catch Day with a clean left hook in the final stanza. No further punishment was needed, as the referee waved off the contest and awarded Grant with his first UFC finish.

Martinez, Grant’s upcoming foe, came to the UFC with a 9-1 record, with his only loss coming by disqualification. Since 2019, he has racked up four wins with the company, as well as a widely disputed split-decision loss to Andre Ewell. He also pocketed a performance bonus in a knockout victory over Liu Pingyuan.

Martinez, like Grant, is enjoying a two-fight winning streak. He stopped Frankie Saenz via TKO in August and then added a unanimous decision over Thomas Almeida in October. In what was his best performance to date, Martinez used his prolific Muay Thai to outpoint the ever-dangerous Almeida.

Grant is part of the SBG network. He serves as the head coach at SBG Bishop Auckland. He also spends time at SBG Manchester. The vast array of talent under the SBG banner will help Grant to sharpen his skills.

Meanwhile, Martinez trains at Factory X Muay Thai in Colorado under head coach Marc Montoya. He has shown vast improvements in his striking during his UFC tenure and has a plethora of high-quality training partners at his disposal, including Alexander Hernandez and Brandon Royval.

This is a fight in which both athletes are coming off the biggest wins of their career, which will always add an extra sense of enticement. With nearly a decade in age between them, as well as betting odds, Martinez is expected to get past Grant. However, with his game style, the Brit shouldn’t be dismissed.

As part of the three-fight series of Brits against Americans, this fight will serve as an appetizer for the return of the aforementioned Edwards. As such, it is most definitely one to watch.