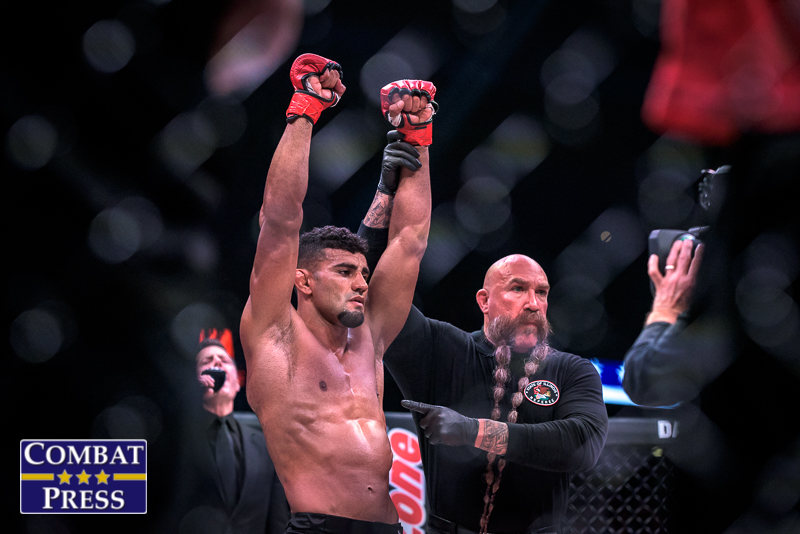 It’s without a doubt a fun and exciting time to be watching the welterweight division in the world of MMA. The weight class has been home to various MMA icons, including Georges St-Pierre, Matt Hughes, Rory MacDonald, Robbie Lawler and Ben Askren. What’s amazing is that this division continues to develop and mature while producing a long list of worthy contenders, champions and finishers that have fans paying close attention.

It took Douglas Lima under one and a half rounds to put a halt to Michael Page’s fast and exciting rise through the welterweight rankings of Bellator. Lima used his superior experience, diverse striking arsenal, and patience to wait for the opening as he landed a perfectly timed low kick that caused Page to hit the canvas. Lima then connected with an uppercut that resembled Thor swinging his hammer at full strength. It wasn’t so much surprising that Lima won, but rather how he was able to win.

Lima was able to emerge victorious in incredible fashion as he continued his climb toward a rematch with the aforementioned MacDonald in a bout for the Bellator welterweight championship that also served double duty as a welterweight tournament contest.

The 32-year-old Lima joined Bellator as a 23-year-old prospect in 2011. He has since gone on to reign over the Bellator welterweight division three separate times while compiling a 14-3 record with the organization. Of his 32 wins, 26 have come by way of submission or knockout.

Lima has and continues to do it all. The Brazilian-born, American-based fighter is currently riding a three-fight winning streak that includes a submission of Andrey Koreshkov in their trilogy bout, a vicious knockout of the flashy contender Page, and the title victory over MacDonald. Lima dominated MacDonald from start to finish to become the champ for a third time and avenge his former loss to the UFC veteran. It’s true when they say that Lima has fought every and any single Bellator welterweight thrown at him and beaten them convincingly.

After finishing his Bellator 2019 campaign by claiming the welterweight throne, Lima now has his sights set on quite literally bigger things. In a somewhat surprising announcement, Bellator officials recently announced that Lima will move up to challenge experienced contender and former Bellator middleweight champion Gegard Mousasi for the vacant middleweight crown. The belt was sadly vacated by Rafael Lovato Jr. after he explained his inability to continue fighting for the time being due to a brain condition called cerebral cavernoma.

Now, fans will be treated to a showdown between two of Bellator’s best current fighters, as Lima challenges Mousasi on May 9. Mousasi is arguably the most well-rounded and experienced fighter that Lima has faced to date. With over 50 professional MMA bouts, 46 victories, and several titles, Mousasi remains one of the most dangerous mixed martial artists on the Bellator roster. He is also eager to reclaim the title he lost in June 2019.

This is going to be a very difficult fight for Lima to win. Not only will Mousasi have the experience, reach and strength advantage, but Lima hasn’t fought at middleweight since 2010. That being said, expect Lima to find a way to win and become a double champ. He is at an all-time high coming off his extremely successful 2019 campaign and is looking to solidify his legacy with yet another win in May. How he will do it remains to be seen, but doubting the Bellator welterweight kingpin at this point has become a difficult task. Lima continues to prove his doubters wrong.