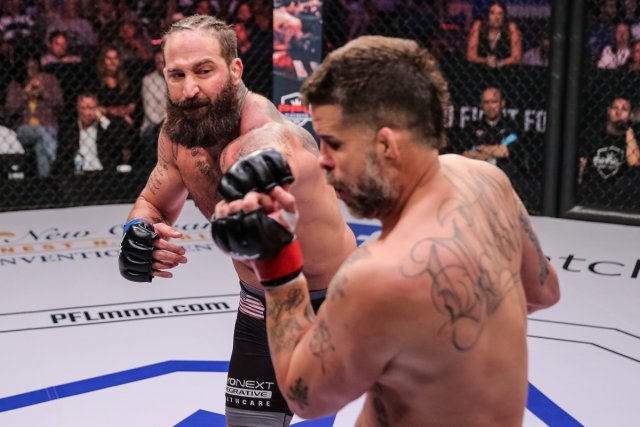 PFL’s Alex ‘The Spartan’ Nicholson: ‘I’d Rather be Rich Than Famous’

Maturity. It’s something that used to be categorized by age, like the perks that come with turning 18, 21 or 55. Nowadays, maturity seems to come from what you encounter in life, regardless of age. Someone who has gone to college for four years to get a degree may be less mature than someone who was involved in a trade skill instead during that same period of time. That person has a wife and kids, whereas the former has a piece of paper and a load of debt. In the fight game, maturity is counted by more than just the number of punches you’ve absorbed or dished out.

Alex “The Spartan” Nicholson spent a bulk of his career going back and forth between the middleweight, light heavyweight, and heavyweight divisions. He went 6-1 before getting his call to the UFC, where he took on Misha Cirkunov. Nicholson lost to his Latvian counterpart in the second round via a nasty neck crank that ended up re-breaking his already battered jaw. In total, Nicholson had four bouts in the UFC — none at heavyweight — and amassed a 1-3 record, leading to his release in May 2017.

“I was cutting like 35 to 40 pounds, man,” Nicholson told Combat Press. “As I started to become bigger, it just became too much. Then, after breaking my jaw, I never really put back on my size as far as 205 and then I got a chance to get back to eating and lifting for a while. I walk around about 230 normally, so I’m feeling good.”

Since his departure from the UFC, Nicholson has competed nine times, with seven of those bouts taking place at his new home of heavyweight. He competed in the inaugural Professional Fighters League season-one heavyweight tournament and cemented himself in the highlight reels forever when he knocked out Jake Heun with a flying knee. He announced that “This is Sparta,” and his fight style did not disappoint. Despite a regular-season loss to eventual tournament winner Philipe Lins, Nicholson still advanced to the playoffs, where he defeated Jack May before running into a brutal punch thrown by Josh Copeland in the semifinals.

“Those guys capitalized on the opening, and they did a good job,” Nicholson admitted. “I look at those fights, and I just learn from them. I’m focused. It’s gonna be dangerous. The focus just comes from life experience inside and outside of the sport. Everything that I do is going to affect the way that I perform in there. If I don’t have everything under control, I won’t be focused. No matter what’s going on in my life, I think I’m always able to do that. I always go out there and have it under control, but now I fully know who I am and who I want to be and things I want to do. I really don’t care what anyone has to say — and a lot of people say that, but I really mean it.

When Nicholson steps inside the cage on June 6, it’ll bring an end to an eight-month layoff, the longest of his professional career. This comes on the heels of four PFL appearances for “The Spartan” in a matter of less than five months.

“I’ve been doing what I always do, man,” said Nicholson. “Just training very Hard [and] staying focused. I’ve been thinking about all the mistakes I’ve made. I’ve finely tuned them — not gonna make those [mistakes again].

“I feel like I’m the best version of myself right now. I’ve never been this focused or in shape. I spend my down time with my son and just relax, but I’m focused and I’m ready to go out there and do this, and I don’t think anyone is gonna stop me.”

Nicholson is a father to his son, Odin, who turns two this year. It seems that becoming a father changes a man.

“I gotta get that money for my boy,” Nicholson said. “It’s easy money. I just gotta go out and take it. They’re not gonna take it from me or him. Nobody’s gonna get in the way of me and my little buddy doing our thing. I fucking guarantee it. And nothing’s gonna stop him from having a good life.”

At PFL’s third event of the 2019 regular season, Nicholson takes on one of the most experienced fighters in the tournament, UFC veteran Francimar Barroso. The Brazilian has an impressive resume. He has competed inside the Octagon nine times and produced a 4-4 record with one no-contest before receiving his walking papers. Since his UFC release, Barroso has gone 3-1-1. Now, he’s making another run at the $1 million prize in the PFL.

“I have a couple things planned, and if they land, I’ll definitely be on SportsCenter the next day,” Nicholson boasted. “Biggest thing he presents is his experience. He’s had a lot of fights and he’s won a lot of fights and he’s fought tough guys, but I’m still on the come-up man. I’m still completing my game. His game is complete. I know everything he’s gonna do. Nobody ever knows anything that I’m gonna do, and I think that he’s in trouble.

“I think that he’s going to try and use his grappling, and I’m a better grappler. I’ve been rolling with ‘Jacare’ [Souza] and Rodolfo [Vieira]. I’ve been fine-tuning all my striking skills, which everyone knows are better than his. Even Copeland […] didn’t do anything good; I just made a huge mistake. He was about done. Even with Philipe [Lins], I just got too carried away. I’m gonna go in there and I’m gonna take my time. I’m gonna pick him apart, and when I find an opening, I’m gonna finish him.”

Nicholson’s mistakes have cost him. In some cases, he could have definitely added a win had it not been for a single misstep.

“The ref walked up after the [Copeland] fight and said that gash on his head, if I had stepped back, he would’ve stopped the fight,” recalled Nicholson. “I don’t want to hear that man. Just hearing it when it was that much money was like, ‘Dammit!’ Whatever happens, happens. You gotta go out there and put on a show. That’s why we’re getting paid.

“I ran right into it. I look back it, and I busted his head open and I was chasing him. He planted and threw, and it was great timing and accuracy, and obviously it was more power than anyone else has ever hit me with. So, hats off to him, man. He got the job done.”

While Nicholson may have lost that fight via the knockout, he is aware that grappling has been his greatest weakness. For a fighter to come out and truly admit there is a flaw in their game is bold. Many fighters ignore it or try to compensate with a different skill set. With the addition of Jacare at Fusion X-Cel, Nicholson doesn’t have to compensate.

“Little bit of different looks,” Nicholson said of his training. “Julian [Williams] is really good. Always has been. And Rodolfo, Jacare, Julian and Leo West — they’re all amazing grapplers. Every day that I can, I get in there and I roll with them. And now when I used to be getting held down and choked out, I’m getting out, getting up and sometimes getting in some good positions. I know they are way better than this guy. I know they would strangle him in less than 30 seconds. I think that if this guy thinks he’s just gonna take me down, it’s gonna be a lot harder than he thinks it is. And I think if he does happen to get the opportunity to check out my new grappling game, he’s gonna be very surprised.

“I’ve definitely submitted some very experienced grapplers, and I’m not afraid to roll around on the ground with anybody. And, I mean, why should I? […] Jacare is pretty much the Michael Jordan of jiu-jitsu. [Barroso]’s not gonna get me, man. He can try. If he does, I’m gonna wake up and be like, ‘Fuck, man,’ but I doubt it. We gonna find out. I don’t think he has the best takedowns, and if he can’t get me down, he’s gonna be going down. We’re gonna find out.

The ultimate goal for most UFC castoffs is to get back to the Octagon and prove that their first run was just a fluke. That it wasn’t the right time or place for them to be. Most welcome this opportunity with open arms. However, the landscape has changed. The MMA pay structure isn’t the greatest if you aren’t a Jon Jones, Conor McGregor or Khabib Nurmagomedov. That’s why the PFL tournament is so inviting.

“They’re definitely compensating us well,” said Nicholson. “No matter what anyone wants to say, the majority of us would do this for free, because we’re kinda fucked up in the head. At the end of the day, being able to do that, you actually really feel like you’re a professional. You can’t call yourself a pro fighter if you’re working a day job and doing this in the spare time. That’s just a hobby. You gotta be able to focus on this and only do this to call yourself a professional, I believe. I got a nice new car, and I can do pretty much anything I want or need. I’ve been trying to save it up for Odin. [I] got him a little account going. I’m just gonna keep feeding it and keep on taking care of my own.

“[The UFC] approached me after the flying knee, but they weren’t gonna pay anywhere near as much [as the PFL]. But at the same time, now, if I win a million dollars, why would I not try to do it again the next year and the year that follows? I mean, I’m not gonna say no, but I see myself staying with the PFL. They’ve done me good, and I’m not gonna turn my back on them. I’d rather be rich than famous. We’re gonna be on ESPN, too, so it’s no different.”

Alex would like to thank his sponsors: And Still Nutrition and Daniel Martinez Attorney at Law. He would also like to thank his team at Fusion X-Cel and American Top Team Sunrise, plus Roger Krahl, his father Mark, and his entire family.
Advertisement