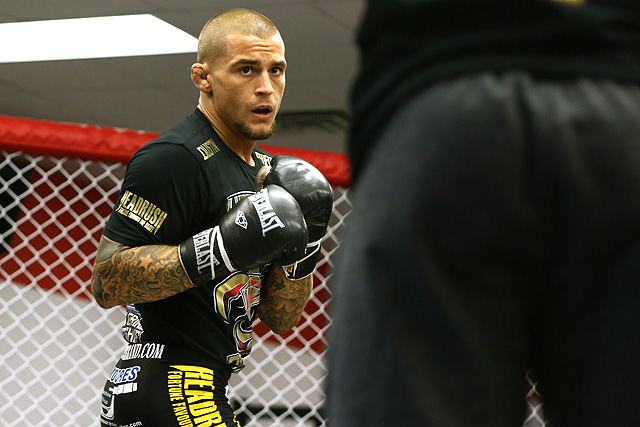 The UFC’s throwback card, UFC Fight Night 120, was a decision-heavy event, but there were some stoppages peppered in there, including in the evening’s headliner. Dustin Poirier took the third-round technical knockout when Anthony Pettis sustained a rib injury that prevented him from continuing. Poirier is now 6-1 with one no-contest since moving up to 155 pounds. The victory over Pettis is a big one, too.

Elsewhere on the main card, Clay Guida needed just 67 seconds to finish Joe Lauzon via strikes. Matt Brown added another knockout to his resume with a first-round stoppage of fellow veteran Diego Sanchez. Raphael Assunção waited until the third round to flash his power against Matthew Lopez. Meanwhile, Cezar “Mutante” Ferreira eked by Nate Marquardt via a split verdict, and Andrei Arlovski took a unanimous nod over Junior Albini.

Most of the main-card fighters were veterans outside of the title mix, but the event served to push Poirier, Assunção, Moraes and Suarez a step closer to contender status. Moraes still needs to put up a truly convincing UFC victory. Poirier is definitely gaining momentum and remains the most established star of the group. Suarez is still only 5-0 and needs more seasoning.

Then there’s Assunção. The Brazilian has built a strong resume, but he’s been largely overlooked. The bantamweight is a terrific 10-1 over his last 11 fights. His only loss came to T.J. Dillashaw, who just recently recaptured the UFC’s bantamweight crown. That seems like the perfect recipe for a title match.

Bellator held perhaps the weakest card in the promotion’s history when it traveled to Ireland for Bellator 187. The card featured more than one sub-.500 fighter, and the headliner — an A.J. McKee Jr. submission victory over Brian Moore — and co-headliner — a 34-second TKO finish for Sinead Kavanagh over Maria Casanova — both seemed like squash matches. In fact, the biggest highlight of the evening was produced by UFC superstar Conor McGregor, who stormed the cage to celebrate a teammate’s victory and ended up in a scuffle with the referee.

Martin Nguyen won a second ONE belt at ONE Championship: Legends of the World. Nguyen, who already held the league’s featherweight title, moved up a weight class to dethrone lightweight champ Eduard Folayang. Meanwhile, Adriano Moraes successfully defended his flyweight strap with a first-round submission finish of Danny Kingad.

In regional action, Ivan Shtyrkov added another victory to his record when he decisioned former Bellator champion Christian M’Pumbu at RCC 1. Shtyrkov’s legitimacy is often questioned due to the nature of some of his victories, including a submission finish of former UFC heavyweight Jeff Monson. He’ll need to fight outside of his homeland to prove that he’s not having victories handed to him by the promoter or Russian officials.

Pancrase delivered another incredible event on UFC Fight Pass on Sunday. Pancrase 291 was everything the fans could have hoped for and featured a crazy brawl, beautiful submissions and incredible comebacks.

In the night’s main event, Yuki Niimura avenged his 2016 loss to “Rocky” Kawamura with a thrilling third-round knockout to win the middleweight King of Pancrase title. The fighters put on a surefire contender for “Round of the Year” in the second frame when both fighters dropped each other four times in the round. Niimura kicked off the action with a solid hook, but Kawamura stood right back up and immediately knocked down an overly aggressive Niimura. Kawamura put him down again in a matter of seconds and jumped on him for the finish. Niimura battled back late in the second as both men just started slinging leather until Niimura badly hurt Kawamura at the very end of the round. Niimura finished off his work in the third round after another tornado of punches.

Former Shooto world champion Masakatsu Ueda locked in a “Submission of the Year” contender with eight seconds to go in the final round against Alan Yamaniha. Ueda escaped a back take from the Brazilian and locked in a straight armlock from top half-guard, a rarely seen submission in MMA.

The other notable highlights from the fight card featured UFC veteran Issei Tamura getting the win, Kenta Takagi edging out Takaaki Nara in a true back-and-forth battle, Russian prospect Aziz Pahrudinov remains unbeaten in 18 fights after his biggest win to date over former Shooto champ Kenichiro Togashi, Yojiro Uchimura landed a brilliant flying knee in the third round of a fight he was going to lose, and exciting Japanese prospect Yoshinori Horie did everything he could to flatline Katsushi Sugiyama, but the grizzled veteran’s insane chin and toughness pulled him through to the final bell.

Kunlun Fight held the best event of the weekend and maybe one of the best kickboxing cards of the year from Sanya, China on Sunday.

Kunlun Fight 67 crowned the new Kunlun Fight 66-kilogram, 16-man tournament champion Yang Zhuo. The former Wu Lin Feng tournament champ took out last year’s Kunlun Fight titleholder and top-10 featherweight Wei Ninghui in the quarterfinals. He continued his run with an impressive win over David Mejia in the semifinals and capped off his victory with a decision over former Lumpinee stadium champion Singdam in the finals.

Elsewhere in the tournament field, top-five kickboxer Ilias Bulaid won a hard fought decision over top featherweight Petchtanong, but was unable to continue in the tourney.

The Kunlun Fight 64-man, 70-kilogram tournament’s final four have been decided. Superbon looks to repeat as champion after defeating former GLORY champ Davit Kiria in the quarterfinals. Top-10 lightweight Marat Grigorian picked up one of the biggest wins of his career with a decision victory over fellow ranked opponent Mohamed Mezouari. The 2014 Kunlun Fight tournament champ Dzianis Zuev returns to the semifinals after defeating France’s Yohann Drai. Ukraine’s Sergei Kuliaba enters the final four in his first year in the tournament. He bested Nikola Cimesa by decision

The world’s most popular Muay Thai fighter, Buakaw Banchamek, made his return to the Kunlun fight ring against short notice replacement Marouan Toutouh. Buakaw was simply too much for his Dutch opponent, sending him face-first to the mat in the second round with a left hook.

W5 Kickboxing returned to Košice, Slovakia this past Saturday.

Tayfun Ozcan continued his winning ways at Enfusion Live 55 on Saturday, with a victory over Thailand’s Petchchaiyo Banchamek in the 72.5-kilogram tournament.

In the other 72.5-kilogram tournament action, Aziz Kallah knocked out Ludo Millet in the third frame and Regilio van Den Ent upset Redouan Laarkoubi after an extension round decision.

Top-10 featherweight Wei Rui continued his unstoppable run with a decision victory over Jesus Romero to win the Strikers League 63.5-kilogram title at Glory of Heroes/Strikers League this weekend. Rui has now won 32 fights in a row and collected titles in K-1 and Wu Lin Feng during that stretch. The 26-year-old has not lost since August of 2014.

ESPN enjoyed its second highest-rated boxing event in 2017 as Jose Ramirez knocked out Mike Reed in the second round of their main event contest. Ramirez’s victory sets him up to fight Amir Imam for the vacant WBC junior welterweight title. In the evening’s co-main event, Artur Beterbiev KO’d Enrico Köelling to capture the vacant IBF light heavyweight title.

On HBO, Daniel Jacobs returned from an eight-month layoff to dominate Luis Arias over the course of 12 rounds. Official scores were 118-109, 119-108 and 120-107, all in the favor of Jacobs. Following the fight, Jacobs said he’ll be ringside for the WBO title fight between Billy Joe Saunders and David Lemieux.

Showtime ended its boxing year with a hell of a main event as Yuandale Evans and Luis Rosa Jr. put on a show. The two men traded big punches early and often. The boxers landed a combined 512 power shots over the course of 10 rounds. In the end, Evans would take home the decision victory with scores of 96-94, 97-93 and 94-96.