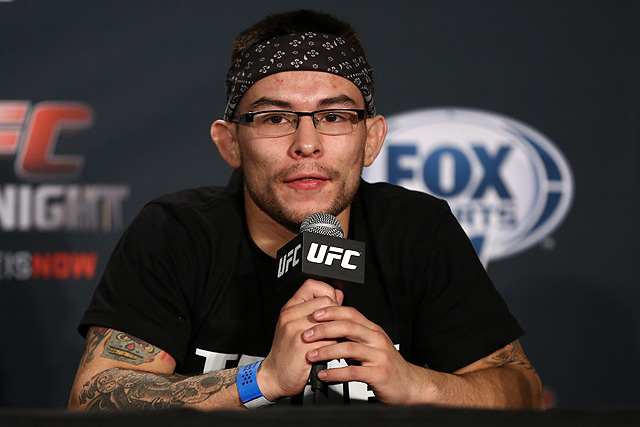 The fight business is just that — a business. Even outside the cage, this business can get pretty messy. With so many people trying to get into combat sports for various monetary reasons, there are laws in place to protect all parties, because it is still too easy to take advantage of people.

As was widely reported earlier in the year, UFC flyweight Ray Borg currently has a lawsuit filed against him by his former management group, Wild Bunch Management, LLC, which is operated by his former coach, Tom Vaughn, owner of Fit NHB in Albuquerque, N.M. This all stemmed from the fact that Borg left his former team in 2016 to head across town to Jackson-Winkeljohn. This is a pretty common practice among fighters, and it’s also one of the concerns when a fighter’s camp is also his management group.

When reached for comment, the attorney for Wild Bunch Management, Ryan Baughman, was very straightforward.

“The lawsuit was prompted by Mr. Borg breaching his contract with Wild Bunch Management, LLC, and also breaching his covenant not to compete,” Baughman told Combat Press.

If a fighter switches gyms, how can he be sued by his manager as well? This is where the lines can start to blur. Obviously, Borg’s side does not agree, and his legal team is fighting the suit.

“The best I can tell, [the reason for the suit is] Ray’s success,” Borg’s attorney, Jason Bowles, told Combat Press. “He’s one of the most successful fighters out of Albuquerque, and I think that Tom Vaughn and Wild Bunch, they wanted to capitalize on that — his money and his success — and try to get some money, even though Ray’s not training with them. He’s gone over to [Jackson-Winkeljohn MMA]. What’s too bad about it is that Ray went over to Jackson’s to make himself better, make himself a better fighter [and] get some different sparring partners, and it worked out.”

While there may have been no ill intentions involved when Borg made the switch, the laws are the laws. There could be some legal issues to clear up. Regardless of what either side felt was the issue, Borg’s team alleges that this was all handled professionally from the start.

“[Borg] did what a lot of people would do. He went and sat down face-to-face, man-to-man, and explained to Tom why he was leaving and why he wanted to better his career, and said he’s moving forward in a different direction,” said Bowles. “This lawsuit was, kind of, out of the blue. I think the reason for it is somebody just wants to capitalize on somebody who’s successful.

“[Ray left] quite a while ago, and you didn’t really see anything happen until he got successful. He rose through the ranks in the UFC, and now, all of a sudden, somebody wants to take some of his money, which is unfortunate. And, Ray, he’s got some medical issues with his son, and they just had their baby up in Denver for five weeks in the hospital. [Borg’s son] had a pretty serious brain infection. It’s just unfortunate that somebody in the industry would want to take advantage of him, somebody who has done well.”

In February 2016, Borg had his final fight as a member of the Fit NHB camp. It ended up as his second UFC loss, bringing his Octagon record to 3-2 in his first 22 months with the promotion. He moved to Jackson’s later the same year and was preparing for a fight with Ian McCall until an illness caused him to pull out. By December 2016, he was finally back in action under his new camp.

Borg won his return fight against Louis Smolka and then scored a win over Jussier “Formiga” da Silva in February 2017. This led to an unsuccessful title shot against Demetrious “Mighty Mouse” Johnson in October at UFC 216. Borg may have come up short in his title bid, but he did end up in a championship fight just over a year after switching gyms. This brings up a timing issue. Why would the suit pop up more than a year after he left?

“There is no reason or significance to the timing of filing,” Baughman said. “Filing a lawsuit is always a last resort. After multiple failed attempts to contact Mr. Borg in an effort to settle the matter, the decision was made to file.”

Regardless of why the suit came up when it did, it’s happening now. It’s very unfortunate timing for the young fighter.

Borg wishes no ill will toward his old team and management. He has bigger fish to fry. The flyweight had to pull out of his second scheduled fight with Brandon Moreno in April after he got glass in his eye from the incident involving Conor McGregor and his crew when a bus that Borg was in was attacked while leaving a UFC 222 media event. Then, Borg’s newborn son ended up with an illness, which caused Borg to pull out of the third scheduled fight with Moreno that was supposed to happen in May. That being said, this suit is not about his life outside of the cage. It is related directly to his career.

“I think they want damages,” Bowles said. “They want part of his payments from the UFC for his fights, even though [Fit NHB] is not training him. They didn’t get him to that level. He kind of got to that level through Jackson’s.

“He did train with [Fit NHB] early on, and they did help him early on, but he moved on to a different place. I mean, Jackson’s is widely known as the best — or one of the best — gyms in the country, if not the world. That’s been one of the reasons for his success, is that he’s a hard worker and everything else. I think that any time you do well, you’ve got people who are happy for your success and people who want to glom onto it. I think that’s what happened with this lawsuit.”

The suit claims that Borg was still under contract with Wild Bunch for his last three UFC fights, but there are obviously some legal guidelines to be followed to really give teeth to a suit like this.

“I think they’re reaching,” claimed Bowles. “I think one of the problems with this lawsuit from the very beginning is, there’s rules. This industry is regulated more than some, because you don’t want unlicensed promoters and managers and other people out there taking advantage of fighters. When Ray first signed a contract with Wild Bunch, he was 20 years old. He was just getting into it, and he wasn’t sophisticated in business dealings. You know, you have commissions across the country — Las Vegas, New York, New Mexico — and they have rules.

Therein lies the problem. If one thinks about this logistically, it does not seem that a manager or coach could uphold a contract if they weren’t even licensed in the state during the time of the fight. This is not the first time a suit like this has come up.

“Ronda Rousey had a similar thing with the California commission, and they moved to arbitration,” Bowles explained. “The board ruled in favor of Ronda Rousey. Her former manager tried to bring a similar allegation, and, basically, the rule is that if you’re not licensed in each state and you don’t comply with the rules, you can’t enforce a contract. The contract is void. The reason why the commissions do that is [because] you don’t want some guy off the street — some kind of a huckster or some person who’s not licensed — taking advantage of fighters who are not sophisticated, sometimes, in business or legal matters and just want to fight. [The fighters are] just trying to make the best for themselves or their family.”

Borg has a family to feed and a career to worry about, but he hasn’t fought since October. This could lead to a big problem for Wild Bunch, as Borg may have grounds for a countersuit.

“Ray could file a malicious abuse of process suit,” said Bowles. “I think there’s grounds for it. And if we find out that indeed what we feel is correct — [Vaughn] was not licensed and he didn’t file the documents in the various states — I think there is grounds for countersuit.

“With Ray, this is not something he is out to do. He doesn’t want to harm Tom Vaughn, and he doesn’t want money from him. What he wants is for this to end and not go forward, because he’s got to focus on his fighting and his family.”

It is unfortunate that a young fighter and father needs to be entangled in this type of legal matter over a year after he left his camp. That aspect of this scenario doesn’t look great for his old camp. However, there are obviously two sides to every story, and a legal process needs to be followed. Hopefully, some type of resolution will be reached soon.

“I think we’re going to prevail,” Bowles said. “I think this lawsuit is going to get dismissed, eventually. I would hope to be able to sit down with Vaughn and his lawyer at some point and talk through it. Maybe we can short-circuit it. I’m not sure there’s really grounds for [the suit], and it’s not going to go well for their side. But sometimes people want to go through it and see what happens. I’m just hoping that cooler heads will prevail and a young man who’s done really well with his life and career, so far, can really focus on that.”