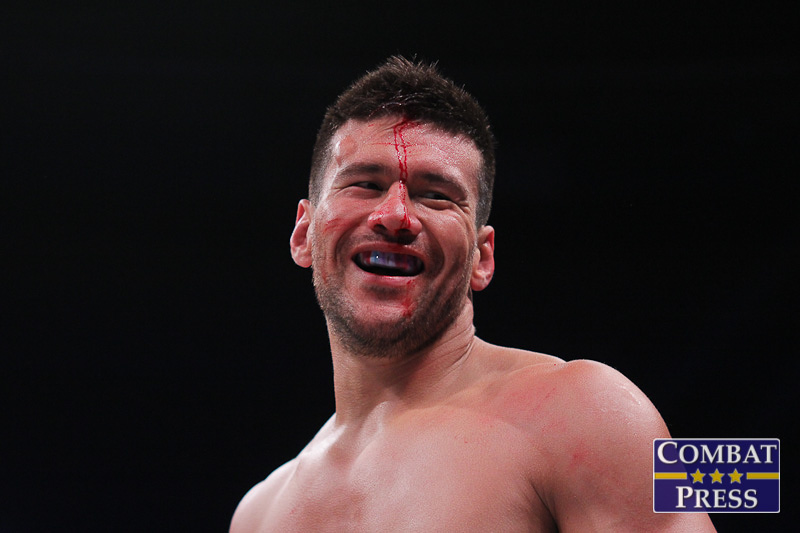 Upset of the Year – Hisaki Kato vs. Joe Schilling

Singling out one fight as the upset of the year was difficult after a tremendous year ripe with underdogs rising to the occasion. The candidates came from every corner of the earth and in almost every weight division.

However, there was one fight that stood out from the rest: the rematch between top-10 middleweight Joe Schilling and Bellator MMA fighter Hisaki Kato.

The two previously met in a cage under MMA rules. Schilling made his return to MMA in late 2014 after nearly six years away from the sport. He debuted with a bang when he knocked out fellow multi-sport athlete Melvin Manhoef at Bellator 131. After a lackluster second fight against Brazilian Rafael Carvalho, Schilling was looking to vanquish his next opponent in a fight tailor-made for his successful return — or so we thought. Kato, a fighter with only two years experience and five fights, sent Schilling crashing to the mat after leaping across the center of the cage with a left-hand superman punch in the second round of their Bellator 139 bout. The perfectly placed strike effectively ended Schilling’s hopes to be a two-sport champion.

The rematch came to fruition when Bellator Kickboxing debuted in 2016. Kato proved to be the superior puncher with four-ounce gloves, but the Bellator promotion wanted the top-flight kickboxer to get another crack at the French-Japanese fighter. That second opportunity would come under Schilling’s rule set, a kickboxing-rules bout on Bellator’s second Dynamite show in June. Kato, a former professional handball player, had never competed under kickboxing rules before. The odds were all in Schilling’s favor, which led many to believe the top-10 kickboxer’s fortunes could turn around in the rematch.

When the fight started, Schilling looked like a man in charge of the situation. He flowed well between his striking combinations while pushing the pace. Schilling landed powerful shots to the body and took full advantage of his superior skills in the clinch. Kato was firing back with his left hand, but he just couldn’t get Schilling to take his foot off the pedal. Schilling tagged Kato to the body with hard knees and sharp right hooks. He went upstairs with a big left hook and multiple right hands after brutalizing Kato’s body for the large majority of the first round. Schilling’s style of fighting full bore with an all-out aggressive offensive output was winning him the fight.

When the second round started, Kato attempted to take the fight back. He landed some solid punches before trapping Schilling against the ropes with three or four punishing left hands. Kato survived the first frame and was on his way to taking over the fight until Schilling broke through the dangerous sequence and went straight to work with knees to the body in tight quarters. Schilling was brutalizing the man who knocked him out just over a year earlier. He pressed forward with vengeful intent. Schilling put everything he had left into his hunt to take away Kato’s consciousness.

The same pressure that had Schilling picking apart the man making his kickboxing debut, was the same movement that left him open for his eventual devastating end. Schilling was on his way into striking range to throw one or two strikes before the final bell in round two. He moved forward with his left hand down, not knowing that Kato’s final move had already been thrown. Kato’s inconspicuous left forearm sent Schilling crashing to the mat.

Kato threw his right hand as Schilling came forward, immediately spun to his left and sent his left hand following when Schilling would least expect it. The perfectly timed strike ended the fight with just one second left in the second round.

The fight was a compelling example that anything can happen when two fighters step into the ring, no matter the disparity in size, skill or experience.