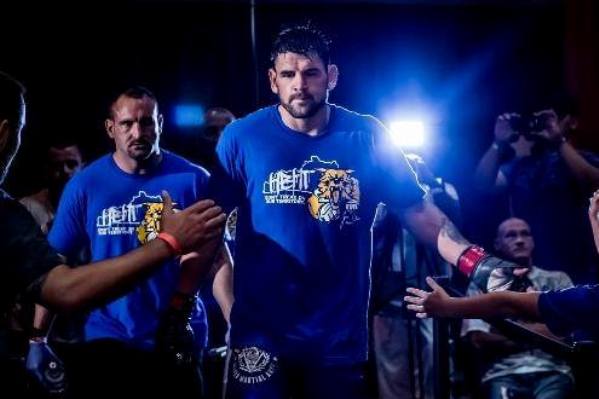 Spend some quality time around professional fighters and it becomes very apparent that the sport of mixed martial arts is not exactly as glamorous as one might think. Most fighters are just normal people, and many of them hold down jobs to support themselves between fights. Unless somebody is at the very top echelon of the game, very few fighters are walking away with much more money than what a police officer or school teacher makes.

Every fighter has the dream of that million-dollar year that a tiny fraction of the athletes have actually been able to achieve, but most fighters are down to earth and understand that they can’t train full-time, fight three or four times per year, and still make ends meet.

Josh Clark, “The Hillbilly Heartthrob,” was on season 19 of The Ultimate Fighter. He is 11-2 as a pro and has finished his opponent in all but one of his victories. He doesn’t fight because it makes him millions. He fights because it’s his passion.

“It’s got to be the rush, man,” Clark told Combat Press. “Getting in there and feeling the crowd and the rush. I always wanted to be a professional athlete. I felt like I probably could have played D2 ball at a Division II college somewhere if I’d put in the effort in high school. You know, I didn’t really know what it took to get to that level.

“After high school, I was working at a factory, and I won a six-month gym membership. Once I won that gym membership, I won two fights in that six months, and people told me I had a lot of talent. So, I thought I did have a chance in this sport. I’ve taken it serious ever since. I want to be somebody in this sport.”

Clark used to train out of Kentucky, but he decided to move out to Las Vegas after his season of TUF and take his training to the next level.

“Man, it’s been awesome,” Clark said. “I started out at Syndicate MMA and then I switched over to Xtreme Couture. I love it, man. Training with some of the best guys in the world has definitely elevated my game.”

An elevated game is exactly what Clark needs as he gets back into action on Friday night at Resurrection Fighting Alliance 41, which takes place at the Cowboys Dancehall in San Antonio. After rising prospect Joe Gigliotti had to vacate his headlining match-up with Trevin Giles to move up to the UFC, Clark stepped in as the replacement. It will be his first MMA fight since October 2014. Clark was out of action for well over a year following a cracked ankle and then a concussion he sustained in a boxing match. The short-notice boxing bout was against a huge Samoan who also happened to be a world-class boxer.

“I fought a guy, Natu Visinia,” Clark said. “He was 10-1 with 10 knockouts, and his only loss was to Steve Cunningham, the welterweight world champion. I was winning the fight and then got caught with 30 seconds left in the fourth round of a six-round fight. He just kept coming forward and started gassing me out. He was so big — he was 295 pounds — and I just couldn’t slow him down. I made a mistake, put my hands down, and he caught me with a big overhand right. I was out for two or three minutes.”

While 2015 and the first half of 2016 turned out to be slow for Clark, partially due to those extenuating circumstances, he was still looking for MMA action.

“We’ve been looking for fights forever, man,” Clark said. “One of the reasons I had such a long layoff is because it was hard to get me on a card. My manager had been speaking with [RFA matchmaker] Mark [Bieri], and [my head coach] Robert Follis called him up and was like, ‘Hey man, you need to give this kid a shot,’ and Gigliotti fell off, and they called me up for it.”

Clark’s opponent, Giles, is undefeated as a pro at 6-0. Giles trains out of Elite MMA in Houston and has been fighting primarily under the Legacy FC and Fury FC banners. This will be his promotional debut with RFA.

“I haven’t really seen too much footage,” Clark admitted. “He’s got some pretty heavy hands, and he doesn’t do a good job of moving forward with his punches. And I don’t plan on being there for him. I’ll let him make a mistake and capitalize on it.”

Clark’s move to Xtreme Couture has been paying off big dividends. He has a huge stable of coaches, including the aforementioned Follis, as well as Danny Davis and many others. His training partners have been some of the best competitors in the sport.

“For this camp, my primary coach is Nate Pettit and my striking coach is Vadim Goberman, who was the Israel kickboxing champion,” said Clark. “I mainly train with Brad Tavares and Trent Williams, and Vadim as well. I usually spar a lot with Uriah Hall when he’s in town, but he wasn’t in town much for this camp, which kind of sucked. I helped him get ready when he was supposed to fight Anderson Silva.

“I’m a whole new fighter. A more confident fighter. I’ve improved all around. My stand-up’s gotten better, my wrestling takedown defense has gotten way better, and I’m a more complete fighter. I really feel that if you’re not top 20 in the world, you’re not beating me.”

Clark is looking forward to making his return to the cage. His family is equally as ready. The fight life is not glamorous, and when a fighter is not in action, he’s not getting paid. However, between family support and a couple side jobs, Clark has been able to make ends meet in the meantime.

“I’ve got a few jobs,” Clark said. “I’m a personal trainer at the UFC Gym, and I’ve got some clients outside the gym that I train. When I’m not working with clients, I actually drive for Uber a little bit, just to make a little extra cash. With Uber, I just use it to make my car payment.”

Some guys build houses. Some guys have professional careers. Clark keeps it simple. He does what he loves. He trains others. Uber fills in the gaps. Clark does what he can to carry his weight in the household while preparing for his return to action. That return comes on Friday night when he headlines RFA 41 on AXS TV.

Clark would like to thank his wife Cori, all of his coaches and training partners, God and all of his family, friends, fans and his sponsors: Fighter Alias and Valley Spine Chiropractor. Follow Josh on Twitter: @JoshClarkMMA
Advertisement