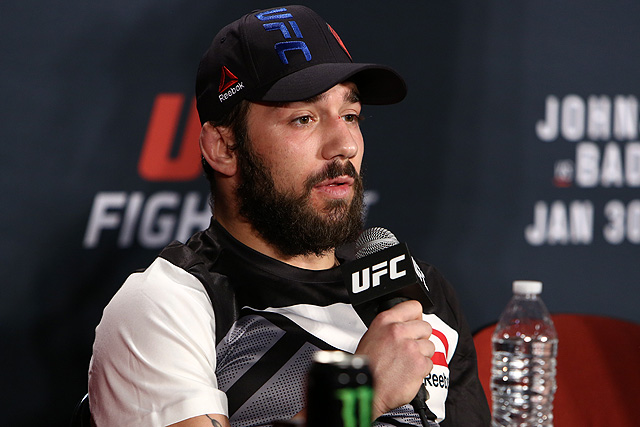 Time tells the answer to many of life’s questions, including how the $4.2 billion sale of the UFC will affect the brand, the employees and, most importantly, the fighters.

UFC bantamweight Jimmie Rivera is scheduled to fight Urijah Faber at UFC 203 on Aug. 10 at the Quicken Loans Arena in Cleveland. It’s the highest profile name Rivera will have faced in his 20-fight career. The 27-year-old combatant is on an 18-fight winning streak, with three of those victories coming inside the Octagon. Now, he’s approaching a fight that could drastically raise his stock.

Rivera doesn’t look at Faber as a well-known veteran or a former WEC featherweight champ. He doesn’t pay attention to the many accolades that have made “The California Kid” a major figure in MMA. Rivera approaches the bout the same as any other. Faber is just a man — a fellow mixed martial artist — standing in the way of Rivera’s goals. When the cage door closes, Rivera will do what he’s always done in an effort to notch another victory on his nearly flawless record. It’s simply another tour of duty in the cage, the same as the rest except that the folks sitting at the top of the UFC corporate ladder will be different.

UFC owners Lorenzo and Frank Ferttita have sold the UFC and will walk away. UFC President Dana White sold his nine percent of the company too, but he will remain in his current position with the UFC. Some fighters might be anticipating big changes in the company that employs them. This may lead to distractions and unnecessary conversations or fogging of their minds, but Rivera looks at the sale of the UFC like it’s business as usual — and not the same business as usual White suggested after the purchase of Strikeforce.

“They’ve already been trying to make it even better. They’ve been trying to make everything as professional as possible, with USADA and drug testing and this and that, the advertising and how they stay on the ball when they change the fights and try to make what’s best. They’ve been around the block, and I don’t think anything is going to go wrong.

“We all got an email on Monday morning about it, and they said, rest assured, everything is on a good path. That shows me right there that they do care and they are still looking out for us. I think everything is going to be fine, but only time will tell.”

Rumors of a UFC sale have been afloat for years, although many were debunked. The first news story that gave a real indication the world’s premier MMA organization was up for grabs came on June 20, when FloCombat’s Jeremy Botter revealed what he confirmed with his sources.

The story had such credibility it sparked immediate conversation amongst media and fans, and even prompted the UFC president to address the story. When White shuts down a rumor, there’s a good chance there’s some truth to it. However, while everyone was weighing in on the topic via social media and debating if there was any veracity to Botter’s claim, the fighters under UFC contract remained quiet. But that doesn’t mean they weren’t speaking to each other about the situation.

Rivera trains with some of the UFC’s top-ranked fighters, so you can bet there were conversations going on between them when the microphones were off. The media suggested a potential sale could be a game changer for the fighters, either positively or negatively, but for Rivera and company the talks were not nearly as speculative.

“We talked about it like, ‘Wow, the UFC might be for sale. Dana is sticking around, so he’s getting a $400 million bonus — that’s a nice bonus, I want to get a bonus like that.’ I mean, not crazy talk, but it is what it is,” Rivera said. “Dana is going to be involved and doing the same job, so unless we start seeing matchmakers go and people start leaving right away, I don’t think it will change. Do you fix something that’s not broken? If they’re smart people, the people that bought it, I don’t think they’re going to touch anything. They’ll maybe try to do some different advertising and marketing, but they’re always trying to add something to advertising and marketing. They’re always trying to make it bigger and better.

“Right now, I think it’s running smooth and running good, but we’ll see. Like I said, time will tell.”