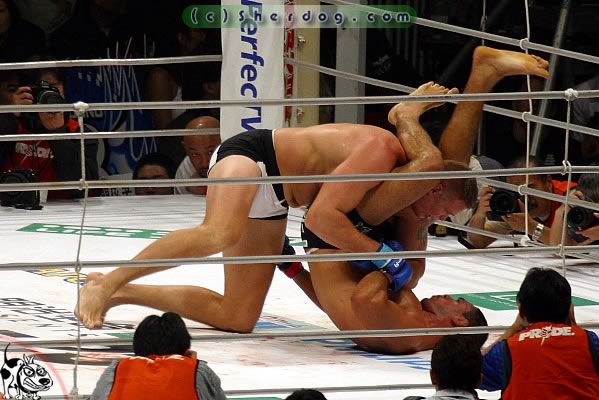 Over the course of this multi-part series, we will take a look back at the greatest upsets, comebacks and victories of Brazilian legend Antonio Rodrigo Nogueira’s 16-year MMA career. In part two, we followed Nogueira’s rise to championship status. In part three, we’ll look at his fight with the enormous Bob Sapp.

It was Aug. 28, 2002. The undefeated 350-pound Bob Sapp cast a large shadow over the Pride FC heavyweight champion in their staredown. Sapp was coming off multiple victories over K-1 legend Ernesto Hoost under kickboxing rules and two first-round finishes under the Pride banner. Sapp would hold a 150-pound weight advantage over Nogueira at the Pride Shockwave show in Tokyo. It was a show attended by over 90,000 fans.

Nogueira didn’t want to waste any time striking with his much larger opponent,so he immediately shot in for a takedown. Nogueira’s takedown was met with the heaviest sprawl MMA has ever seen. Sapp was able to grab a body lock on Nogueira, not wasting any time and picking Nogueira clear off the mat, slamming him directly back down. The slam was met with a monstrous crowd reaction. Even the broadcast crew featuring Bas Rutten, Stephen Quadros and Bill Goldberg were going crazy.

Sapp looked massive on top of Nogueira. Despite being comfortable off of his back, Nogueira even looked nervous to be on the ground. With the lights in the stadium cutting in and out, Sapp was raining heavy punches on a downed Nogueira. Nogueira was able to get back to his feet, but he was tentative in attacking the much larger Sapp. Instead, the Brazilian attempted to shoot a double and reverse to get on top. Once on top, Nogueira didn’t have it much easier, facing an assault of upkicks on his way to the side mount. Nogueira was in side control before the fight was briefly stopped to check the small cut above the right eye of Sapp.

With the fight back on the feet, Nogueira attempted to land heavy shots inside, but to no avail as Sapp was able to deflect the blows with his superhero-like biceps. A Nogueira counter right hand landed on Sapp before the Brazilian tried another takedown. He was met with another sprawl from the much larger fighter. Nogueira locked up a triangle, but Sapp easily picked up the Brazilian, getting out of the triangle as he lifted his way out of the submission. Sapp towered over Nogueira as blood dripped down the champion’s face.

With Sapp starting to tire, both men were given a chance to breathe while their cuts were checked. The doctor wiped the blood from the swollen cut under the eye of Nogueira before the fight was reset in the center of the ring. Another series of heavy strikes from Sapp finished the round.

With UFC heavyweights Josh Barnett and Maurice Smith giving the newcomer Sapp advice in the corner, Nogueira didn’t look to have a great chance for the win. As the second round began, Nogueira hit Sapp over and over on the feet, but nothing seemed to faze him. Sapp ended up on top of Nogueira again, pushing all of his weight on the champion. Nogueira remained calm, controlling the wrists of Sapp to avoid punishment. A triangle attempt from the champion was again easily avoided.

With Sapp tiring, Nogueira worked for the left arm and hunted for a kimura, attempting the low-percentage submission on the much stronger fighter. Nogueira was able to get to his side and get the arm out, but Sapp straightened his arm to defend it. Nogueira used his arm and turned his back to Sapp and reversed Sapp to get on top. Nogueira held onto Sapp as hard as he could, looking to isolate his left arm and set up a submission. Nogueira grabbed the arm, trapping it with his left arm and putting his right hand on the wrist of Sapp while bringing his leg over Sapp’s head. Nogueira fell back and attempted to break Sapp’s hold on his other arm. Nogueira worked his hands to the right, breaking the grip and straightening out the arm.

The tap came from Sapp with just under a minute left in the final round, cementing Nogueira’s place as the toughest fighter on the planet.

The size contrasts would continue through Nogueira’s next two outings, Pride FC battles with towering kickboxer Semmy Schilt and natural middleweight and light heavyweight competitor Dan Henderson that we’ll look at in part four of this multi-part Nogueira career retrospective.