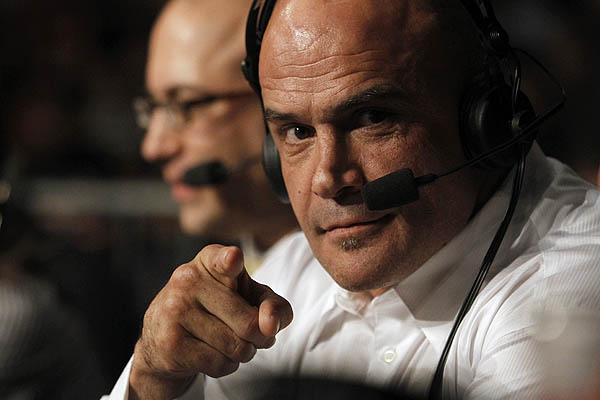 When the very first Ultimate Fighting Championship took place back in November 1993, a 28-year-old Dutch karate expert was already 2-0 as a professional mixed martial artist, fighting under the Pancrase banner in Japan. Back then, in the true roots of MMA, not only were guys fighting several times a year, but it wasn’t unusual for them to fight every month. Only 17 months after his professional debut, Bas Rutten was already 7-4 with only two fights making it to the 10-minute mark. His last loss ever came in March 1995.

By the summer of 1999, Rutten was one of the most famous fighters in the young sport’s history. Bringing his record to 27-4-1, he had just secured the heavyweight title at UFC 20 and was training for his next battle when he suffered multiple injuries and had to retire from the sport he loved. In 2006, Rutten made one last return to the cage when he took out Ruben Villareal with leg kicks before finally retiring from the sport.

His fighting career was amazing and he was a pioneer who laid the foundation for the future of MMA, so it only stands to reason that Rutten is one of the most famous color commentators today. Between AXS TV’s hit show Inside MMA and the multiple promotions that tap him for his resources, the Dutchman has become one of the most widely recognized faces in the sport.

Rutten’s foray into color commentary began with Pride Fighting Championship’s first event, which took place in 1997. During his nearly nine-year tenure with the promotion, he met a young commentator by the name of Mauro Ranallo.

Ranallo was about five years younger than Rutten, but he had previous experience and a colorful personality, one that would turn out to be a great compliment to Rutten’s gregarious charm. As their respective Pride careers eventually started to wind down, the two men moved in different directions. Rutten continued to coach, earned culinary certifications and inventing products. Ranallo, meanwhile, deepened his career as a commentator across several promotions.

In 2015, Kenny Rice, Rutten’s co-host on Inside MMA, began to take a different angle with his position. Therefore, AXS TV needed to find a new co-host for Rutten. While the search was underway, Ranallo and Rutten had joined forces again to host a new podcast. It was then that Rutten discovered they would be partners once again.

“I was doing the podcast with Mauro, and it was the first time he said, ‘Hey, I might be working with you on Inside MMA,’” Rutten told Combat Press. “I asked him what job he was going to do, and he said he’d be filling in for Kenny.

Tonight, live on AXS TV at 12:30 a.m. ET, the new and improved Inside MMA will air, with the old friends reunited for a completely different addition to one of the sport’s biggest shows.

“I think once it starts with the different dynamics — Mauro’s always on himself, and just because he likes something, doesn’t mean I do,” said Rutten. “That’s going to be great, because he will go against me. Like, I will say I think this guy’s going to win, and Mauro’s the one who’s going to say it’s not true. Then he will give his reasons why and I will explain my reasons why, so it makes it more interesting for the viewer.”

In 2003, when Ranallo debuted with Pride, he was in his early 30s and new to the scene. Rutten, who has spent most of the last 10 years working across multiple sports and promotions, is happy to see new doors opening for the veteran broadcaster.

“He’s been growing up in front of our very eyes,” Rutten said. “Once he started doing Pride, people saw that he was an incredible talent. Now, he’s doing these big events, like [Floyd] Mayweather, GLORY Kickboxing [and] WWE, and the guy is a phenomenal commentator. Now, we might see some boxers and professional wrestlers on Inside MMA.

Even with all of his endeavors outside of MMA commentary, Rutten still holds the sport close to his heart. His reunion with Ranallo is just another reminder of his history with the sport.

“I miss the feeling and the training,” Rutten said. “I remember walking into the gym to interview Michael Bisping, and these guys were still training, and I really wanted to spar at that moment. Also, when I see guys roll on the ground. The ground game is so cool, because, every time, you come up with something new. That, I really miss. Competing in general — there’s nothing like it, the feeling that you have. The only thing that has come close to it is when I jumped out of a plane. For skydiving, I said, ‘This is the most insane.’ I felt really excited.”

Rutten has jumped out of a plane once, but he plans to do it a lot more in the future. Knee issues make it tough, though, but it remains on his agenda. In the meantime, he does a pretty good job of keeping his body in tip-top shape. While his newest invention, the O2 Trainer, is a big focus of his from a business standpoint, the Body Action System, one of his previous training products, is a staple in his personal training regimen.

“I try to work out every day, but most of the time, it’s four to five days per week,” Rutten explained. “One day, I do power training, because I’m still trying to rehab my arm from the three neck surgeries that I had — my right arm is still weak, but it’s starting to get better. For now, the stamina comes from just kicking the head on the Body Action System I have. I just kick the head. Left-right-left-right for a minute, then a minute off. I do that for a half hour. It’s pretty gnarly, but I enjoy it.”

Rutten has a ton of irons in the fire. With something always new on the horizon, one has to wonder how he has enough time in the day to do half of what he does.

“I’m still busy with my O2 Trainer, the lung training device I invented, and I’m working with this scientist now, who is the top of his field in the world,” Rutten said. “He’s got some crazy medical journals coming out now, so people can really see what it does. I also have the Body Action System. I’m teaching two times a week at my gym. I’ve got the podcast with Mauro — that is exciting. I’m doing a lot of stuff. I’m traveling, doing the World Series of Fighting in a couple weeks, and I also understand the UFC might want to have me when they do their Dutch show in Rotterdam [on] May 8. Hopefully, I’m going to go over there and do the show.”

Tonight on AXS TV, the legendary Rutten will be back at it again on Inside MMA, but 2016 is shaping up to be a great new year for both the legend and the show. With the addition of Ranallo, great memories will combine with colorful commentary to add another interesting chapter to the life of one of the sport’s true pioneers.