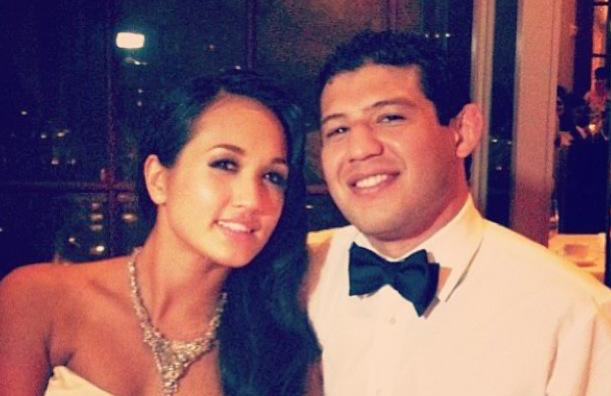 Most folks don’t find their true loves right away. Some folks never find their true loves. Usually a person has to go on a lot of bad dates, try a few bad options and go through tough times and turmoil before knowing who or what is the best fit. You might love someone or something else, but once you find the perfect pairing, you know it.

Keri Anne Taylor-Melendez played basketball, along with other sports, in high school and at junior college. Even though she loved the sport, it just wasn’t the “one.” Like so many fighters, Taylor-Melendez was convinced to try a cardio kickboxing class. She loved it and her trainers convinced her to try the Muay Thai technique class. After taking on a few fights during smokers at her gym, she knew this sport was the “one.”

“Kickboxing was a really fun way for me to stay in shape,” Taylor-Melendez told Combat Press. “I like the aggression of it. The competition, the physicality — I love it.”

After winning around 10 bouts during smokers, Taylor-Melendez went amateur and posted a very respectable record of 4-1. Around that same time, friends convinced her to go on a date with Gilbert Melendez, a burgeoning MMA fighter who trained at a competing Muay Thai gym. She wasn’t really familiar with MMA at the time and thought he must not be a very good fighter. At the end of the date, Gilbert was teasing Keri and got her to punch him. She got him with a right and, who knows, maybe that’s what got his attention.

Eventually they married, and while Melendez’s career continued from Shooto to Strikeforce to the UFC, Taylor-Melendez’s pro Muay Thai career started. She accepted a fight against boxing and kickboxing veteran Jeri Sitzes.

“It was a great experience,” said Taylor-Melendez. “I went to Tampa to fight for Shin Do Kumate and took on a very experienced fighter. I think she was 11-0 in kickboxing, and who knows how many boxing fights and wins she had, and it was my pro debut.

“It was hard to know how many fights she had, and the rankings are different. Even still, it was tough to take the loss. But again, it was a great experience and we actually became friends after that fight. Because of her, I got into the World Combat League.”

You might remember Chuck Norris’s promotion. It started in 2006 and ended in 2008. The fights were stand-up bouts with no holding or takedowns and very limited clinching. Taylor-Melendez went 4-1 for the Oklahoma Destroyers in the team-based organization.

In 2010, Melendez and Taylor-Melendez met the next love of their lives, their daughter Laylakay.

“We watch fights — it’s normal for us. Ronda Rousey is one of her favorite fighters,” Taylor-Melendez said. “If she wanted to compete and fight, I wouldn’t be against it. She is new to wrestling, but she has been at the gym her whole life. She has grown up around it. You can find her shadow-boxing, throwing combos. But we got her into gymnastics recently. I think it’s really good for her to get that body awareness before we get her into gi jiu-jitsu class.”

Now that their daughter is older, it’s time for Taylor-Melendez to get back into competition. Bellator and GLORY are putting on their first kickboxing and MMA co-promoted card, dubbed Dynamite 1, this Friday. The ring and the cage will be on the same arena floor. When Taylor-Melendez first agreed to compete at the event, it was with an eye on an MMA bout. However, the fight will be a kickboxing affair.

“I am so excited to be fighting Muay Thai on the big stage. It’s exciting to be a part of history,” she said.

Taylor-Melendez’s opponent will be Hadley Griffith. Griffith, 1-4 in MMA, will be making her pro Muay Thai debut against the 2-1 Taylor-Melendez.

“She is young and is going to be tough match-up,” said Taylor-Melendez. “She is 5-foot-11, which means it’s going to be a little awkward for me. It’s been hard to get girls that tall to spar with me, but I have a good game plan. I have the best training and fight camp with Gilbert and the team. I can’t wait to show off my skills.

“I see the fight ending with my hand being raised.”