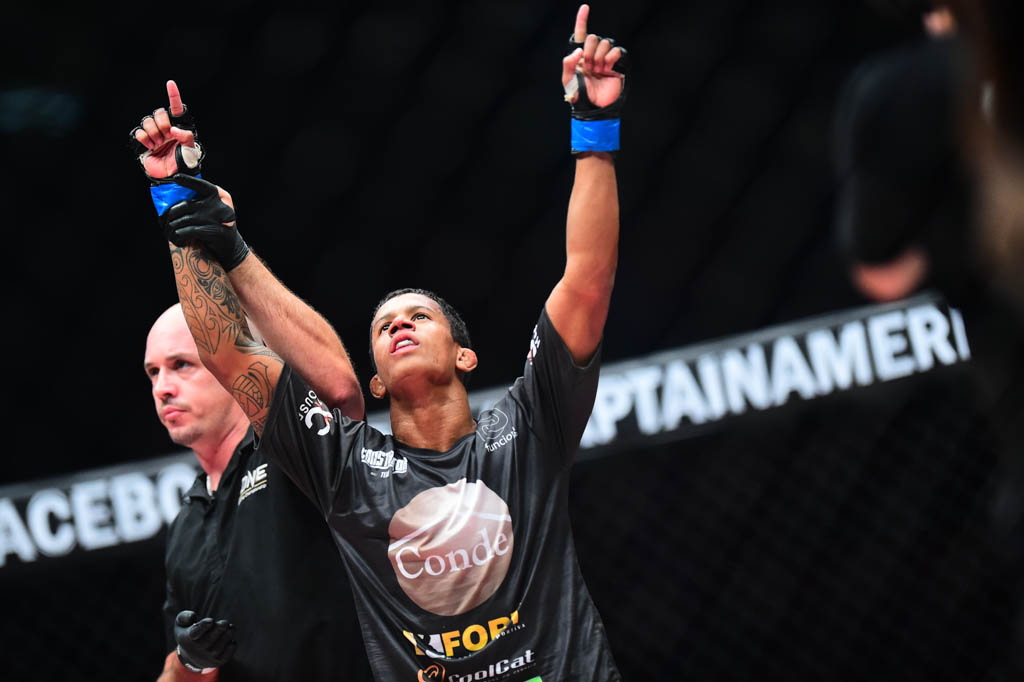 ONE FC 25: Age of Champions Preview and Predictions

After what was a stellar year in 2014 for ONE Championship, the promotion has its first show for 2015 coming up on March 13 in Kuala Lumpur, Malaysia.

In 2014, ONE Championship put on more events in a calendar year than ever before, and also expanded its global reach by hosting an event on China’s mainland for the very first time. This coming weekend’s card, dubbed ONE FC 25: Age of Champions, is the promotion’s 25th event since the company’s inception in 2011.

The night is headlined by a flyweight championship bout in which 125-pound kingpin Adriano Moraes defends his title for the first time. The challenger for the night is Japan’s Asuka Mikami, who is poised to make his ONE Championship debut.

The event will air live via pay-per-view stream on the ONE Championship website.

Since suffering the lone loss on his record, which was in his debut with ONE Championship, Adriano Moraes has hit back with three straight wins, all by way of submission. The Brazilian Jiu-Jitsu black belt has made a career out of showcasing his skills on the ground. Prior to joining ONE Championship back in 2013, he had won nine fights in a row.

After dominating veteran flyweight and UFC veteran Yasuhiro Urushitani at ONE FC 14 almost 12 months ago, Moraes became the odds-on favorite to be the very first ONE Championship flyweight titleholder. He claimed the belt in his last outing when he defeated Geje Eustaquio.

The flyweight division is one of ONE Championship’s least stacked weight classes, so it made sense for the company to bring in one of the best flyweights in the Asian region to challenge the champion. The company gave the honor to Asuka Mikami.

Mikami has a big opportunity ahead of him for his ONE Championship debut. The last time the Japanese fighter lost was way back in 2009. Since then, he has enjoyed a great deal of success — 11 victories, to be exact — while fighting on home soil. This bout will mark the first time the 15-fight veteran will compete outside of his native Japan.

Moraes isn’t going to part ways with his title easily. This one is going to the mat, and it’s going there from the very early outset of the fight. Look for Moraes to do whatever it takes to take Mikami to the mat and keep it there until his jiu-jitsu can prevail. Mikami could grind this out if he is able to keep the fight at range, but it’s going to be an overwhelming night in the office for the Japanese fighter. We will see Mikami post his first loss in over five years. Moraes will retain the belt.

Since losing in spectacular fashion to Eddie Ng in his ONE Championship return, Peter Davis has strung together three wins in a row. Davis, a highly touted Malaysian fighter, had made three appearances under the ONE Championship banner prior to his loss to Ng, and he won all three of those fights as well. With a 6-1 mark as a ONE Championship fighter, Davis has the most wins by a single fighter in the promotion’s history. At one point, he was seen as having a good chance of dethroning lightweight champion Shinya Aoki, or at least getting himself in a position to do so.

Since losing to Ng by first-round submission, Davis has managed three stoppages. He has now been handed the task of welcoming India’s Rajinder Singh Meena to the ONE Championship cage. The SFL vet has posted just one loss in his nine professional bouts. All eight of Meena’s victories are by way of stoppage.

For the hometown hero, Davis, this is an important bout. With a win, Davis could catapult back into a contender’s bout, which is exactly what ONE Championship wants to see. Meanwhile, a loss will send Davis back to the drawing board once again.

Davis isn’t going to let this fight slip through his fingers, and certainly not while fighting in a co-main event slot in his home country. Davis will utilize his grappling to make quick work of Meena. Although the Indian fighter’s record suggests that he is no slouch in the grappling department, it’s likely that Davis will overwhelm him early in the fight to seal the victory and possibly set up a key bout with the likes of Koji Ando.

There is no doubt that Ann Osman is one of Malaysia’s biggest draws when it comes to mixed martial arts. Although she has only had three fights, all of which took place over the course of the last 12 months, her story of overcoming adversity as Malaysia’s first female mixed martial artist has been making headlines all around the country.

In her debut, Osman met Sherilyn Lim. The two warriors fought to a split decision in a battle where many thought that Osman should have been awarded the nod, thus keeping her spotless record intact. She rebounded to post back-to-back victories over Ana Julaton and Aya Saied Saber.

There is no way that Osman is losing this fight at home. It’s not going to be pretty, or flashy, but she will once again notch up another 15 minutes of cage time in hopes of possibly having the opportunity later in the year to compete for the ONE Championship women’s flyweight title.

Walaa Abas Mohamed Kamaly’s first ONE Championship fight ended in a decision loss to the aforementioned Julaton. The Egyptian, who was 2-1 and riding a two-fight winning streak when she locked horns with Julaton, was able to hang on throughout the fight, but she was never in a position where she could be considered the more dominant fighter. Kamaly was outmatched on the feet in that bout, and her second outing for ONE Championship is probably going to play out in similar fashion. Osman is going to be too quick, too smart and too desperate in this one. It’s going to go to the judges, who will see Kamaly on the receiving end of one-way traffic once again and award the verdict to her opponent, Osman.

Bullos, a former URCC bantamweight champion, succumbed to a submission loss at the hands of Major Overall in his last outing. It was the Filipino fighter’s first loss since 2011. Whether it was cage rust or his nerves getting the better of him, Bullos certainly didn’t show his full potential in his ONE Championship debut.

Ting’s striking has continued to improve, and with his latest stint training out of Saigon Sports Club, he believes that it has gotten even better. His best tool will be his ability to press Bullos against the cage and to utilize his explosiveness to take the fight to the mat. Ting will push the pace early on and notch another stoppage victory. It’s going to be Ting’s ground-and-pound that is responsible for moving the Kiwi’s streak to three wins in a row. Ting isn’t prone to boring fights, but he also knows when to take his shots, so look for this one to be finished in the early stages of round three.