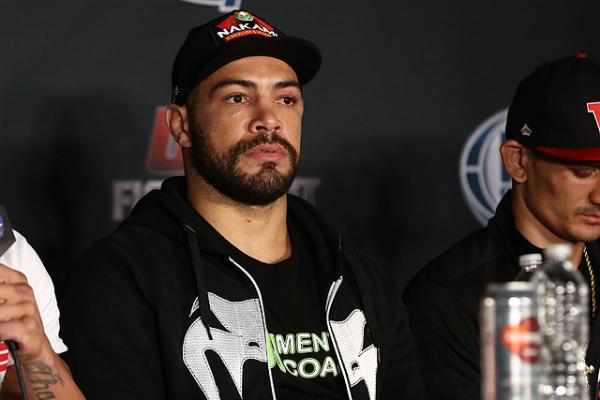 There sure were a lot of memorable moments during Saturday’s UFC Fight Night: Henderson vs. Dos Anjos card. Probably the most significant was in the event’s eponymous fight, when Rafael Dos Anjos dealt top-ranked lightweight Benson Henderson his first loss by knockout. Controversial as the stoppage might have been, it cements Dos Anjos as a true contender at 155 pounds and should set him up for an attractive next contest.

Also notable from Saturday night’s Octagon battles were Jordan Mein’s first-round starching of Mike Pyle, the action-packed catchweight contest between Max Holloway and the debuting Clay Collard and, of course, Ben Saunders’s omoplata submission from the preliminaries. There was, however, another impressive performance somewhat hidden among all of this other excitement, and it came from a man who for the last several years I’ve associated with anything but the sort of explosiveness he displayed in Tulsa, Okla.

Let’s take a trip back to April 18, 2009. I was in Los Angeles visiting a friend from high school and I couldn’t stop talking about UFC 97. “It’s gonna be such a great card,” I repeatedly told my friend—who is decidedly not a fan of MMA—in an effort to get him excited. At the top of the card sat then-middleweight champion Anderson Silva, who at the time was absolutely untouchable. Coming into his title defense in Montreal that night, Silva was in the midst of an eight-fight UFC winning streak and had yet to go the distance in the Octagon. He made Chris Leben’s iron chin look like glass. He made previous champion Rich Franklin look like a shell of himself. He even stepped up to light heavyweight and destroyed James Irvin, just because. I had no doubt, then, that when Silva took on Thales Leites at UFC 97, there would be blood.

Instead, much to my chagrin and my friend’s disappointment, we got something much different. Rather than the beautifully violent displays of precision striking for which Silva had become so well known, fans watching UFC 97 saw one of the most uneventful title fights in the history of the UFC. Doubtlessly aware of the danger Silva presented on his feet, the clearly overmatched Leites tried repeatedly to turn his main-event tilt with “The Spider” into a grappling contest. Leites went for takedowns, he pulled guard and, most importantly, he basically refused to engage Silva while standing.

A frustrated Silva did little to increase the pace of the fight, but managed to score enough points to walk away with the decision. It would not be the last time Silva’s performance in the cage would be called into question, but it was certainly the most surprising for fans who at that point had come to expect a Silva fight to end with a Silva finish.

Unfortunately, Leites was not immune from similar criticism. While his strategy at UFC 97 was a sound one (why, after all, should Leites simply play into his opponent’s strength just because fans want to see the champion destroy him?), it certainly didn’t do much for his marketability. Despite his record of 14-1 before his title shot, Leites became known to many as the man who helped the most exciting fighter in the world look boring.

Leites would be released from his UFC contract following a loss at UFC 101, and I thought, “Good riddance.” I figured the Brazilian would toil in some other promotions for a few years before hanging them up to be a full-time jiu-jitsu coach or something. Never, I assumed, would I find myself cheering Leites on as he puts the finishing striking touches on a more highly ranked opponent. Well, you know what they say about assumptions.

Leites rebounded from his UFC ouster by posting an impressive 6-1 record between 2009 and 2012, a record that included four stoppage victories. He even avenged his lone loss during that period when he defeated Matt Horwich in March 2012, after which the UFC would once again come calling. Despite a 16-month layoff before his return to the Octagon, Leites would emerge victorious at UFC 163 when he outpointed Tom Watson. He’d give Ed Herman similar treatment at UFC 167 before notching his first non-submission finish since 2005 by TKO-ing Trevor Smith in less than a minute. Leites’s success propelled him to the 15th spot in the UFC’s middleweight rankings and a featured bout in Tulsa against Francis Carmont.

In Carmont, Leites was facing a man who had won his first six UFC fights but struggled when brought to the next level of competition. Carmont had lost two consecutive fights before his showdown with Leites, though to be fair they were to fourth-ranked Ronaldo “Jacare” Souza and ninth-ranked (and resurgent) C.B. Dollaway. Needless to say, the Tristar-trained Frenchman was in need of a win on Saturday and, because of my bias against Leites, I thought he’d get one for sure.

The first round of the middleweight contest wasn’t much to write home about. A little back-and-forth action here and there, but nothing that would make anyone raise his eyebrows. The fighters returned to their respective corners after five minutes, and I figured this was going to be one of those fights that is difficult to score due to lack of activity. Having not paid close attention to Leites’s career post-Anderson Silva, I found myself smugly unsurprised.

Less than 30 seconds into round two, Leites unleashed an overhand right that found its mark. Carmont was stunned against the cage, and Leites moved in for the finish. A few unanswered punches later and Carmont was prostrate on the canvas while Leites celebrated his victory. I had to rewind the DVR just to make sure I saw what I thought I saw, and sure enough: Leites had knocked someone out and I was standing wide-eyed in my living room.

I’m not someone who is afraid to admit when he’s wrong, and I was wrong about Leites. It wasn’t fair for me to simply write off his successful career just because of a single questionable performance five years ago. I didn’t do that for Demian Maia after his similarly bizarre fight against Silva and I certainly haven’t done that for Silva himself, despite his direct involvement in the fights in question. Perhaps my long-standing beef with Leites is born of my own embarrassment after all of my MMA proselytizing to my friend before UFC 97 fell flat on its face. All these years later, I certainly can’t fault Leites for not wanting to walk into Silva’s strikes for my own enjoyment.

Leites is currently riding a seven-fight winning streak, including four straight in the UFC. Although there are likely too many middleweights between him and champion Chris Weidman to warrant a title shot for Leites anytime soon, if he should string together two or three more wins (particularly of the exciting variety of Saturday’s finish), we could see him once again competing for that belt. If that should come to pass, I’d be hard-pressed not to root for Leites.

Just to be safe, though, I probably won’t tell all my friends they have to watch the fight.