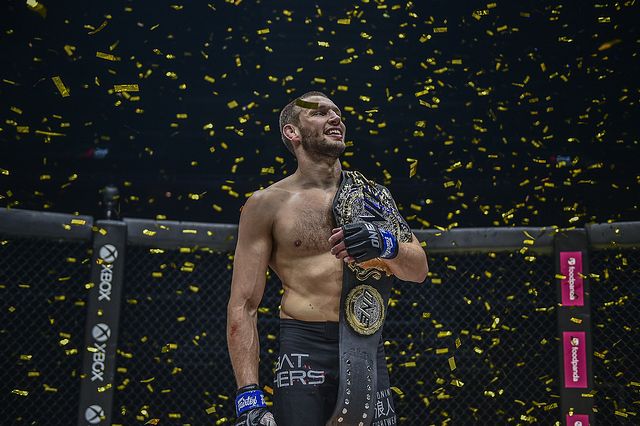 ONE 159: De Ridder vs. Bigdash Preview and Predictions

ONE Championship returns to action this week with a loaded fight card that is capped off by a pair of title clashes at ONE 159: De Ridder vs. Bigdash. The main event pits two-division champion Reinier “The Dutch Knight” de Ridder against surging contender Vitaly Bigdash.

De Ridder boasts an incredible 15-0 record and comes into the fight after picking up a submission victory against Kiamrian Abbasov back in February. He looks to defend his middleweight title this time out, and there is no more deserving contender than Vitaly Bigdash. Bigdash has won three fights in a row to earn himself this title shot and looked as impressive as ever his last time out when he settled the score against Aung La N Sang in their third bout.

The co-main event is an interim title bout in the atomweight Muay Thai division as Janet Todd takes on Lara Fernandez in her ONE debut. Todd hasn’t lost since 2019 when she fell to Stamp Fairtex, a loss that she got back as she defeated Stamp in the rematch. Fernandez is making her promotional debut, but she is a veteran of the sport with world titles in WBC Muay Thai as well as ISKA. The winner of this bout will put herself in line to challenge for the full title against reigning champion Allycia Hellen Rodrigues.

ONE 159: De Ridder vs. Bigdash takes place inside the Singapore Indoor Stadium. The event airs live and free on ONE’s website with the lead card starting at 6 a.m. ET, with the main card following immediately after.

Yes, but it will be no easy task. Vitaly Bigdash has won three straight fights and most recently defeated Aung La N Sang in the pair’s rubber match. He is a well-rounded fighter who can get the job done anywhere, as he holds six submission wins and four knockouts on his record. He will give de Ridder some trouble early on in the bout.

Expect Bigdash to surprise the champion with some crisp striking combinations in the first round and have de Ridder on the back foot for a couple minutes. The punching power of Bigdash will make de Ridder look for the takedown out of necessity if not desperation. That is where the real fun begins. These two are very talented grapplers and are quite nimble for men of their size. We will get a few nice scrambles that are usually reserved for the lighter weight classes before de Ridder takes control for good and starts to advance position and look to finish the fight with a choke. A late second-round stoppage via arm-triangle choke will give the champion the victory as he retains his belt.

Janet Todd and Lara Fernandez meet for an interim atomweight Muay Thai title; which woman walks away with a piece of the championship?

It has been over a year since fans have seen Janet Todd in action. She last competed in Apr. 2021 where she notched her sixth straight victory. During that stretch, Todd picked up a decision victory over Stamp Fairtex. Needless to say, she has built quite an impressive resume. Her opponent is a promotional newcomer in Fernandez, who is coming off a loss in her last bout when she challenged Amy Pirnie for the Lion Fight title. There is no doubt that Fernandez is a quality opponent, and, as a veteran of the sport, is deserving of an interim title shot in her debut. But, just like in her last outing, she will come up empty in her search for gold. Todd will come away with a decision win after being the more precise striker throughout the bout, keeping Fernandez at an awkward range, where she is unable to land any strikes with much authority.

Bokang Masunyane is coming off a loss for the first time in his career; how does he rebound against Hiroba Minowa?

Both of these fighters are coming off losses to Jarred Brooks. Minowa went the distance with “The Monkey God”, whereas Masunyane was submitted at the end of the first round. Like all fights in the men’s strawweight division, this fight will look like it is taking place in fast forward. Both the striking exchanges and the grappling encounters will be so quick, it will be hard to break down in real time who is getting the better of the action. Once the figurative dust settles, Masunyane will have done enough to avoid being submitted by the Japanese standout, but he won’t have done enough damage to earn himself a victory. “Little Giant” will have dropped two straight bouts and is going to have to go back to the drawing board once again to tighten up his game, as he draws nearer to his 30th birthday and enters his physical prime.

The lead card featherweight Muay Thai bout between Jo Nattawut and Jamal Yusupov. This recently added bout is going to be exciting and meaningful. The 32-year-old Nattawut is coming into this fight off of a loss to Chingiz Allazov and is only 1-2 over his last three fights. There is no doubt that “Smokin’ Jo” always brings the heat when he comes to fight, but has failed when he goes up against the best of the best. This fight will be a great contest for him to right the ship a little bit against a high quality opponent who is just a shade off the absolute best of the best. The confidence from this win will begin to propel Nattawut back towards a title shot as he makes one last run towards gold before he hangs up the gloves.