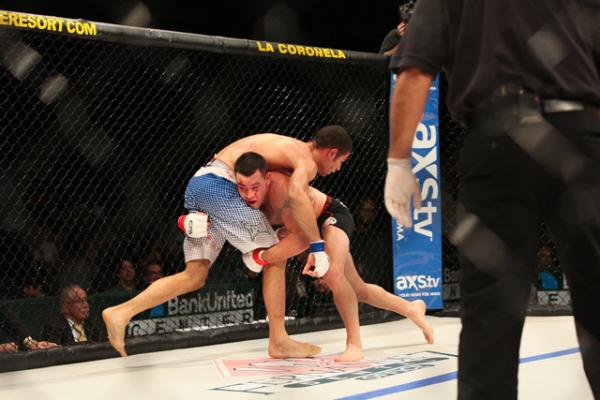 What Is Colby Covington’s Path to Victory at UFC 268?

Colby Covington challenges Kamaru Usman for the UFC welterweight championship for the second time as the two headline UFC 268 this Saturday night. Their previous fight took place at UFC 245<> in Dec. 2019, when Usman won by fifth-round TKO.

In the eyes of many within the MMA community, Covington faces a seemingly insurmountable task in trying to defeat Usman this Saturday. With that being said, what could his path to victory be in this fight?

In their first meeting, Covington came up short in his quest to become the undisputed UFC welterweight champion. However, his performance had firmly cemented his place as the second best in the division. Considering how competitive this bout was, a rematch seemed inevitable. The rematch has come much later than anticipated, and both fighters have had very different paths to get here.

Usman has defended his title three times since he last faced Covignton. The first of these was against Jorge Masvidal at UFC 251 in July 2020. Masvidal took the fight on six days’ notice after the original challenger, Gilbert Burns, was forced to pull out after testing positive for COVID-19. Usman would proceed to win an uneventful fight by unanimous decision. This was his first bout with his new coach Trevor Wittman, after Usman had left his old team of Sanford MMA in Florida. This was partly due to the fact that Burns was his Sanford teammate at the time. However, Usman explained that he was planning on leaving the gym regardless of Burns being his opponent. He stated that he was seeking more dedicated individual coaching, something that he felt was difficult to find at a big gym.

The 34-year-old then delivered an impressive third-round knockout of the aforementioned Burns at UFC 258 in February 2021. Usman surprised many by calling out Masvidal again in his interview after the fight. He agreed to a quick turnaround, and the rematch was scheduled for UFC 261 just two months later. He would end up shocking the MMA world by executing a vicious second-round knockout of Masvidal, who, until that point, had only been knocked out once in 49 professional fights.

Usman established himself as the pound-for-pound best fighter in the world. He came into MMA as an accomplished wrestler, but is now also a proficient striker with devastating knockout power.

Covington has only fought once since UFC 245, in what was a main event in Sept. 2020 against his long-time foe Tyron Woodley. He dominated the fight and secured a finish in the fifth round, when Woodley could not continue after he sustained a rib injury.

Usman has made exponential improvements in his striking under the tutelage of Trevor Wittman. Against Covington, the fight played out exclusively on the feet. Usman has always carried power, but his newly-improved technique allows him to harness it to greater effect. He was able to hurt and finish Burns with his jab, while his knockout punch of Masvidal is one of the most picture-perfect blows inflicted in MMA in recent years.

Usman’s power advantage was decisive in the first contest against Covington, and based on his recent performances, it will be even more of a problem for the challenger the second time around. Covington was content to fight at close quarters, but this seems ill-advised in their upcoming fight. In the first contest, he used very little head movement and had sub-par footwork. This made him a stationary target, and it allowed Usman to keep inflicting damage throughout the contest.

Despite having several flaws in his performance, there are still positive aspects that Covington can take into the rematch. One of these is a speed advantage. Covington is not renowned for his quickness, but he caused Usman discomfort when he threw flurries of punches. This means that he could successfully implement a “stick-and-move” approach. This will require a lot of mobility, but Covington has the conditioning to successfully execute this game plan for 25 minutes.

Covington’s trash-talking is large part of his brand, and he has continued to insult Usman in the build-up to the rematch. At UFC 245, his pre-fight antics seemed to unsettle Usman, but also appeared to have a detrimental effect on his own performance.

Covington will need to take the emotion out of the fight if he is to secure the win. Usman later admitted that he fought in a more emotional manner than usual. In spite of this, he was able to prevail due to his ability to not deviate from his strategy. Covington was so intent on landing a knockout blow that he neglected kicks and body shots. This was a departure from the way he approached his previous fights. Meanwhile, Usman landed a substantial 53 body shots and this caused Covington to fatigue towards the end of the bout. Usman successfully managed to slow down one of the most well-conditioned athletes in the UFC.

Covington has also changed camps since the first Usman fight. The former interim champion’s relationships with several fighters and coaches at American Top Team had deteriorated. Consequently, he decided to leave the gym and start training at the MMA Masters gym, which is also located in Florida. So far, his only bout with his new team has been against Woodley. In that contest, he was able to land takedowns and put out a large volume of strikes, just as he had done for the majority of his career. However, there were subtle changes to his approach. Covington was far less chaotic with his striking and was more selective with his shots against Woodley. This resulted in him landing 54% of his significant strikes, which was his best accuracy in his last seven fights. This indicates that he is no longer purely focused on attempting to overwhelm his opponents with volume and, instead, wants to land more effective strikes. As impressive as Covington was in this outing, Woodley was a shell of his former self at this point. For this reason, it is difficult to gauge Covington’s improvement under his new team.

Covington may need to wrestle against Usman if he is to be successful. Attempting to ground a man who has never been taken down in the UFC is a formidable challenge. When two grapplers are matched up, the contest often plays out on the feet and that is what transpired in the first fight. A major aspect of Covington’s game is his ability to seamlessly mix in takedowns with his striking. His refusal to do this in the first fight meant that he had limited his offensive weapons. Even if he is unsuccessful in his attempts to ground Usman, throwing in takedown attempts will keep the champ guessing. It could also cause him to fatigue. Usman is considered the superior MMA wrestler on the basis of him never being taken down in the Octagon. However, this cannot be definitively proven until there is a grappling sequence between the two. For Covington, using his grappling will give him respite from having to stand with a dangerous power puncher.

With his abrasive personality and tendency to make personal insults towards his opponents, Covington has become one of the most despised figures in MMA. This has led many to ignore his outstanding ability. Inside the Octagon, the California-born fighter has reached the top of the sport by deploying a marauding and somewhat reckless style. On Saturday, he will need to demonstrate his development and deliver a calculated and precise performance in order to dethrone Usman. Covington has repeatedly stated that an improved version of himself, “Colby 2.0”, will show up at UFC 268. For his title hopes, it is imperative that this comes to fruition.